Creating a new Brussels neighbourhood inside a disused railway station from the 1900s took a lot of problem-solving. Helena Russell looks at how designers came up with a renewable timber solution that works with the steel structures to bring out the best in the space 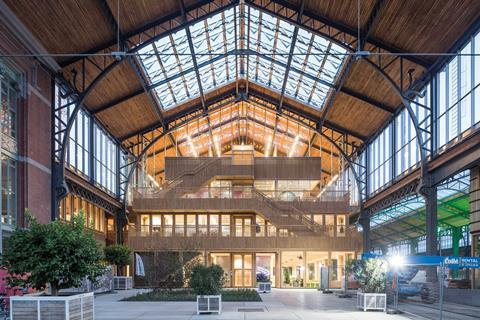 The UK may be home to some impressively refurbished railway buildings such as Coal Drops Yard at King’s Cross in central London, but a Belgian scheme is redeveloping such structures on a bigger scale. The vast steel train sheds of the former Gare Maritime close to the docks in Brussels are being transformed into a neighbourhood of offices, retail and leisure facilities – including a dozen timber pavilions built within the 40,000m² of land enclosed by the historic frames.

The 1902 structure, with a footprint of 276m by 138m, is one of the largest railway buildings in Europe, and from 1907 was a central part of the Belgian capital’s freight interchange facility on the 37ha site now known as Tour & Taxis. But changes to how goods were distributed and the opening of EU borders closed the customs facilities, and in the 1990s the site was put up for sale.

Developer Extensa purchased the site in 2001 as part of a consortium of three parties, buying out the others in 2014. The station is among a number of buildings being renovated in a mixed-use development that aims to preserve the architectural heritage of the site. 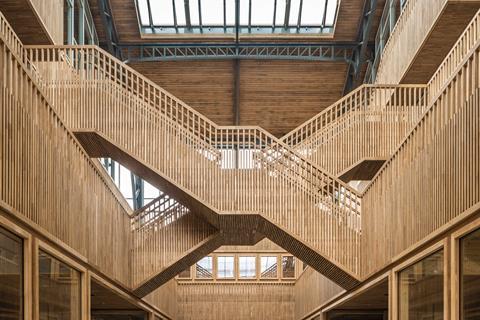 Extensa head of construction Kevin De Neve reveals that the €60m (£56m) renovation of the Gare Maritime originally started without an architect on board. “But a sketch by Willem-Jan Neutelings triggered our head of design Razvan Oprescu to start the conversation with Neutelings Riedijk Architects,” he says.

“Willem-Jan had a clear view about how to fit the new building volumes into the old station – his main argument was to keep it simple, and not fight ‘the iron lady’ as he called [the structure].”

We used 10,000m3 of wood and every connection is made mechanically, so in theory we can dismantle them if required

Neutelings says: “We developed the concept of ‘a city where it never rains’. We created a plan with 12 separate interior building blocks that are placed under the arches and follow the rhythm of the existing structure. The feeling will be of a lively Mediterranean city where it is pleasant to stroll during all seasons.”

Extensa was also keen to future-proof the scheme, hence designing to a circular philosophy supported that aspiration. “The mission was to build everything in wood and use concrete just for the foundation and the floorplate,” De Neve explains. “We used 10,000m3 of wood and every connection is made mechanically, so in theory we can dismantle them if required. 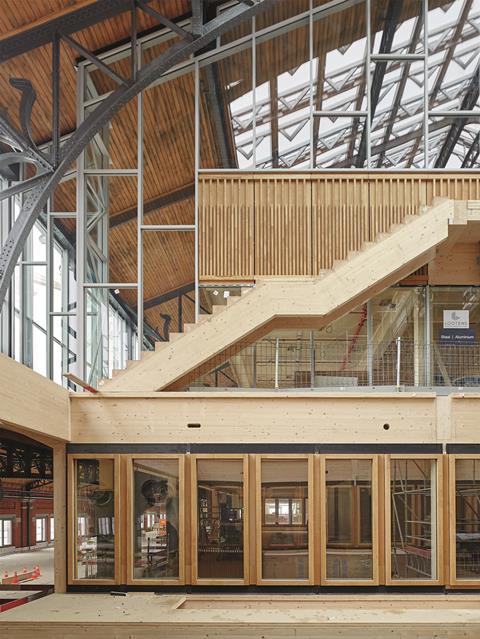 “The biggest problem we faced was to build the new volumes within the historical structure,” he continues. “To allow for thermal expansion and contraction of the steel structure, we had to leave a 7cm gap between the two.”

Thijs Van Roosbroeck, partner at structural engineer Ney & Partners, explains that although the vast building has no internal dividing walls, and structurally it acts as a single unit, it is in fact a series of huge halls, each 276m long. “There are three main halls that each have a roof span of around 26m, with smaller halls in between them. The load-bearing structure is a series of three‑hinged frames made of steel trusses, with mostly riveted but also some bolted connections,” he says, noting that the design is “quite special” for a functional building.

Adding 10,000 photovoltaic panels to the roof of the structure was the key focus

It has brick walls and huge glazed windows at the end of each of the main halls. Although it has no statutory protection, Van Roosbroeck explains that Belgian heritage protection authority Koninklijke Commissie voor Monumenten en Landschappen has taken an interest in the project.

Initially, the client’s intention to add 10,000 photovoltaic panels to the roof of the structure was the key focus for Van Roosbroeck: “We established that yes, it was possible with a small amount of reinforcement as the structure still had some reserves of strength. We also found the general condition of the structure was good.” The main problem was corrosion along the gutters between the halls, he says – some elements had to be replaced, and there was some strengthening needed on elements that had potential for buckling. 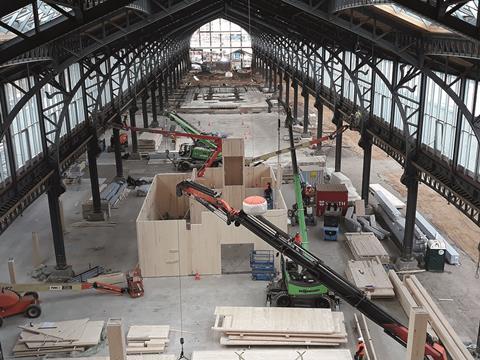 The site during construction

The existing train shed forms the thermal envelope, with no additional heating and cooling in the pavilions. New insulation was added to the roof as well as solar panels, and the huge windows along the sides and at the ends of the main halls were fitted with modern glazing. Some 1,633m2 of sensor-controlled dimmable Halio electrochromic glazing panels have been used – mechanical control was dismissed as it would have affected the visual appearance of the facade by the introduction of opening vents.

Heating and cooling in the halls will rely on 10 geothermal wells drilled to a depth of 140m, assisted by an adiabatic passive cooling system that uses evaporated rainwater to cool the air drawn into the new buildings. On a sunny day, the solar panels should supply 100% of the power required by the Gare Maritime neighbourhood.

Engineer Charline Lefèvre from Ney & Partners Timber Engineering explains why timber was chosen for the pavilions: “The client had a very short schedule and the fact that timber buildings can be put together quickly was the main reason it was selected. Whenever we spoke about the budget, we were concerned concrete might come back into the discussion because timber was a little more expensive. But they really wanted to build in timber,” she says.

Another big issue was fire safety, states De Neve. “We integrated a number of solutions, including adapting thermal heat scanners used by the US military to act as fire detection, and introducing evacuation stairs between the buildings,” he says.

This was not straightforward, he explains, as Belgian fire safety laws require evacuation stairs to be enclosed to protect against fire and smoke, and the architect’s vision was open staircases. However, the refit of the existing building also involved the introduction of 800 vents along the crown of the roof to assist with air circulation, as well as smoke extraction in the event of fire. An extensive programme of testing at the University of Liège and modelling of the full evacuation of 15,000 people from the building were necessary to convince the authorities to approve the unorthodox solution. 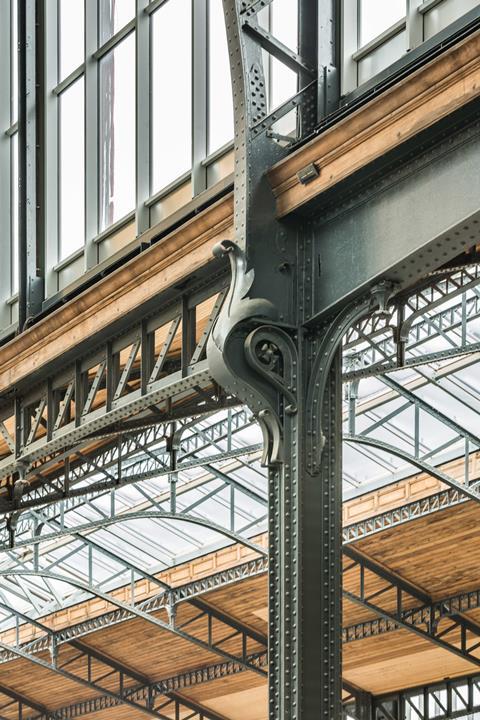 Detail of the steel frame

Lefèvre notes the main challenge for the design was to tuck the new buildings snugly inside the existing structure – with limited room for manoeuvre, they had to be designed for assembly by small plant inside the bays of the building. On the other hand, being under cover eliminated any weather dependency during construction and will be beneficial for longevity. Of the 12 new buildings, 10 are almost identical, says Lefèvre, and while this simplified the construction process, with construction of each pavilion taking around eight weeks, it did mean the logistics of delivery and storage of the many pieces had to be tightly managed.

The main challenges were how great a volume of timber was required, alongside the very short programme, says Martin Schimpf, sales and estimation manager at Züblin Timber, the subcontractor for building construction on the scheme. “The contract was signed in September 2018 and we had to be on site within two months and complete within 14 months,” he says.

The buildings are formed around central cores of spruce cross-laminated timber (CLT), with a structure of columns and beams, and floors of CLT panels with glulam ribs. The latter enabled longer spans to be achieved than would normally be the case with timber construction – up to 8.4m in the buildings themselves – but how to assemble them needed special consideration. “Normally the ribs would be glued to the panels at the factory,” says Lefèvre, “but this would have made transportation from Munich to Brussels very inefficient.” The possibility of setting up a workshop to do the gluing on site was considered, but according to Schimpf the cost of setting up a facility was prohibitive.

Instead, the team designed a screwed connection that could be made on site without any special conditions. These ribbed floors, which act compositely, accommodate services and eliminate any need for cable holes in the ceiling beams, except at the ground floor where there were restrictions on excavation depth.

The spatial constraints of the existing building limited the options at times – the upper mezzanine floors are cantilevered out from the core and a special joint had to be developed to support them. The cantilevers use spruce Kerto LVL beams, chosen to limit the floor height required, and are more than 4m long.

Cut-through rendering of the complex

Each building also incorporates four high‑strength beech laminated veneer-lumber beams, which are employed where mid-span columns need supporting, the beams must resist very high levels of shear stress, or beam height is restricted. Spruce veneer on the beech beams ensures a match throughout. The beams with the highest loads are connected using perforated steel HSK plates, which are milled into the wood and glued with epoxy resin to ensure they are completely invisible. The same joints were used for the wooden stair stringers.

The first occupants moved in last year, including professional services firm Accenture, and the remainder should arrive this year, depending on circumstances. For Extensa, attention will hopefully then move to the next phase of the site masterplan – a 150m-high tower also intended to adhere to circularbuilding principles.