While originally scheduled for 2012, the Louvre’s first museum outside of Paris should be worth the wait 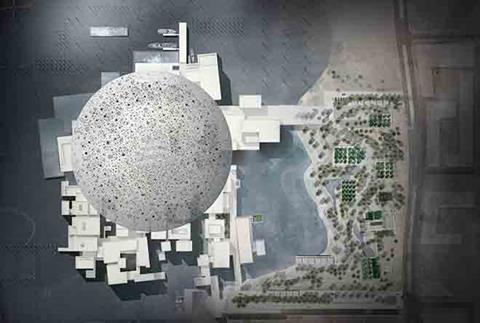 2016 is set to be the year that several long-delayed projects finally complete, and others will hopefully get off the ground. Building’s look at some of the highlights to come in the year ahead continues with the Abu Dhabi Louvre.

Despite years of delay, the opening of the Louvre’s first museum outside Paris remains one of the world’s most eagerly anticipated cultural events. First scheduled to open in 2012, the museum’s most recent missed completion date was the end of 2015. It is now currently expected to open at the end of the year. Its eye-watering budget of £540m and its spectacular suspended dome engraved with a patterned geodesic filigree means it is likely to be worth the wait. The museum, designed by Jean Nouvel, will also be the key component of the Saadiyat Island Cultural District, an extraordinary complex of art institutions being designed by some of the world’s most eminent architects including Foster, Hadid and Tadao Ando. With typical regional sangfroid no official reason has ever been given for the Louvre’s successive delays, but it is suspected that finance and supply bottlenecks created by the United Arab Emirates’ current huge building boom might well be to blame. Despite its prolonged construction the museum is by no means the most delayed major cultural project in the region. Heneghan Peng’s monumental Grand Egyptian Museum at Giza was scheduled to complete last August but will now not open until 2018 at the earliest.