The tracker: On the sunny side

Yes, the situation is still getting worse, but the rate of decline is slowing and non-residential is looking brighter for the first time in 21 months. Experian Business Strategies fills in the forecast

Construction activity continued to contract in December, although the rate of decline had eased as the index rose by four points to 45. However, a sector-by-sector breakdown provided a more detailed picture.

Activity in the non-residential sector expanded for the first time in 21 months as the indicator jumped by 20 points to 52. In contrast, the activity indices for the residential and civil engineering sector remained below the no-change mark of 50, with the former decreasing by three points to 46 and the latter dropping by two points to 30.

Tender enquiries increased in December from the previous month, albeit at a slower pace, as the index fell to 54.

However, firms struggled to convert these enquiries into actual orders. The index remained stable at 43, thus signalling that orders books were below normal levels for the time of season. Not surprisingly, firms’ intentions to keep reducing prices had not changed in December, although the rate had slowed as the index rose by eight points to 45.

Meanwhile, the situation for construction employment continued to look bleak in December. The employment prospects indicator fell by two points to an eight-month low of 34, having stabilised in the previous two months.

Finally, the proportion of respondents reporting no constraints on activity fell for the third successive month in December. Although insufficient demand had become much less of a problem when compared with the previous few months, bad weather was reported to have significantly constrained firms’ activities.

The leading construction activity indicator indicates that construction activity will enter growth territory for the first time in a year in February. Increasing by two points to 51, the index is projected to climb above the no-change mark of 50, before remaining at the same level in March. 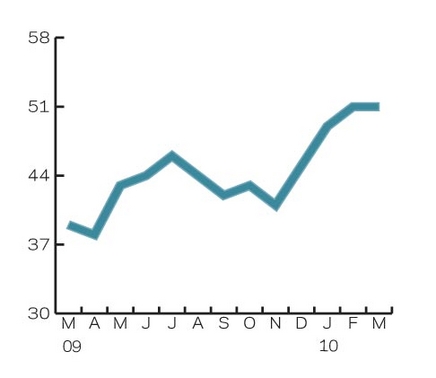 The leading activity indicator uses a base level of 50 – an index above that level indicates an increase in activity, below that level a decrease.

In December, about 56% of residential firms reported that they had up to three months of work accounted for, less than the 67% who said the same in September. Meanwhile, 33% indicated they had between three and six months of work in hand, while the remaining 11% reported order books that would take them beyond six months.

Finally, all of the civil engineering firms surveyed had less than three months of work in hand; however, the lack of responses for December may be distorting the picture painted of the industry.

In December, eight of the 11 regions saw an increase in their indicators. Wales saw the strongest rise, with the index improving from 44 in November to 61. However, the surge may be attributed to the low response rate from the principality. For Scotland, the index grew by 10 points to 53, while Northern Ireland’s figure rose by seven points to 50, the no-change mark.

Yorkshire and Humberside’s index also rose to 44, an increase of nine points. 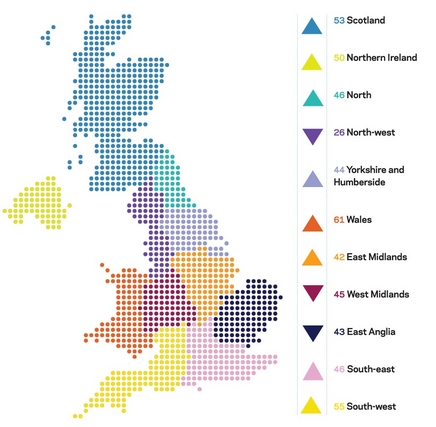 The South-west was the only English region with its index above the 50-point mark, signalling expansion. The five-point rise was in line with the increase for the North, which saw its indicator reach 46. The South-east also saw a rise, albeit by only one point.

The index for the North-west also changed by one point, though downwards to 26. Meanwhile, the decrease in the index for the West Midlands was much larger, falling by nine points to 45. Finally, the indicator for East Anglia dropped by seven points to 43.

The UK indicator, which includes firms working in more than five regions, rose six points to 53.

Experian Business Strategies’ regional composite indicators incorporate current activity levels, the state of order books and the number of tender enquiries received by contractors to provide a measure of the relative strength of each regional industry.

This an extract from the monthly Focus survey of construction activity undertaken by Experian’s Business Strategies division on behalf of the European Commission as part of its suite of harmonised EU business surveys. The full survey results and further information on Experian Business Strategies’ forecasts and services can be obtained by calling 0870-196 8263 or logging on to www.business-strategies.co.uk