The tracker: Pause for breath

After four consecutive months of decline, construction activity stabilised in September. This was signalled by a six-point increase in the activity index, to 50 points. On a sector-by-sector basis, the residential and non-residential activity indices also rose, the former by 11 points to 50 and the latter by three points to 51.

In contrast, the civil engineering index declined by 10 points to 37. For the second consecutive month the proportion of respondents citing no constraints on activity fell, albeit only marginally, to 23%, as insufficient demand (55%) and finance (18%) became increasing problems. Bad weather and “other factors” were constraining activity levels for 4% of survey participants, while labour, material or equipment shortages were not seen to be an issue.

Although the level of enquiries in September was higher than in August, firms were finding it difficult to translate these into orders, which were below normal for the season. Respondents were considering lowering their prices over the next three months in order to win more business, a mood reflected in the tender prices index, which remained below the 50 mark for the twenty-sixth month in a row.

Not surprisingly, respondents were also planning to decrease their headcount over the next quarter. 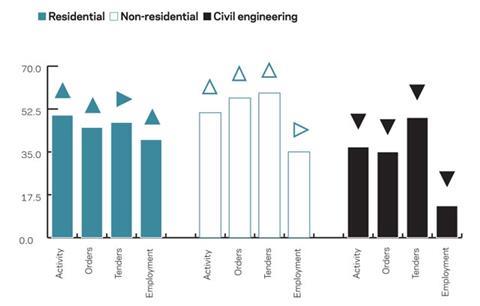 Construction activity is likely to have contracted slightly in October, according to the Leading Construction Activity Indicator. The suggestion is that industry conditions are unlikely to improve by the end of this year, with small declines predicted to continue to December.

Just under 54% of the residential firms surveyed had less than three months’ work in hand in September, an improvement from July when about 70% were in that position.

More than 31% of firms working in the sector said they had enough in the pipeline to keep them ticking over for between three and six months, while the rest reported sufficient work to take them beyond the six-month mark. 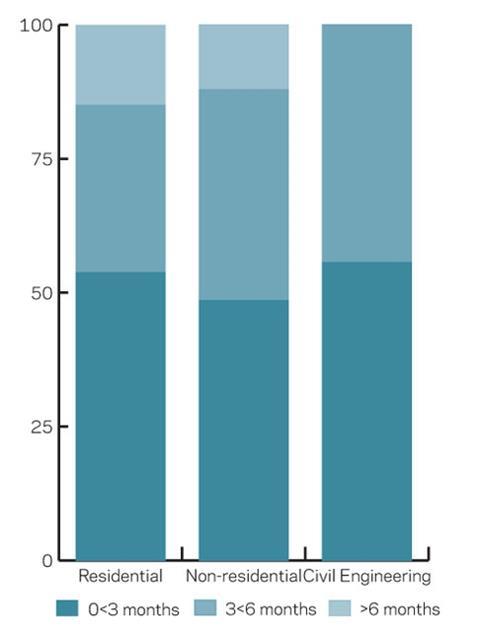 In the non-residential sector, about 49% of firms had work in hand of less than three months and 39% had enough to last them between three and six months - smaller proportions than the figures for civil engineering firms, of 56% and 44% respectively.

Although the North-west, Wales, East Midlands and Scotland all experienced increases of two points in September, only the figures for the latter two were above the 50 mark.

In contrast, the index for Northern Ireland declined by the same magnitude to 38 - its lowest result since May. 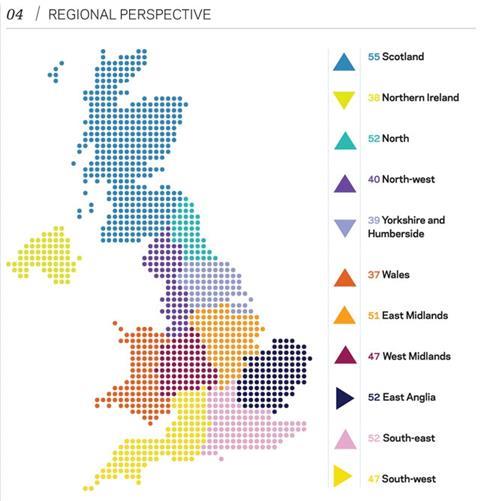 Yorkshire and Humberside’s index was also down in September, by 10 points to 39 - the fourth consecutive month of fall. For the South-west and East Anglia indices were unchanged on a monthly basis, at 47 and 52 respectively.

The only other regions which experienced a rise in their indices were the South-east and the North, with the former seeing an increase of one point and the latter three points. Both regions’ figures reached 52 - above the no-change mark of 50, signalling strengthening situations in for them.

The index for the UK, which includes firms working in five or more regions, fell by one point to 57.