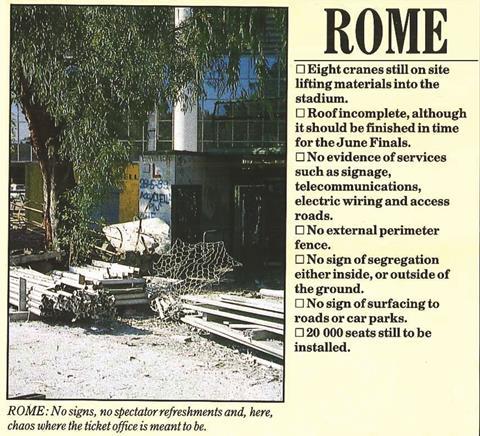 The 4 May 1990 issue of Building carried an article about the scarily behind-schedule construction work on the World Cup stadiums in Italy. The competition was due to kick off in just 35 days, but Building was reporting massive delays and quality of work that cast doubt on assurances of spectator safety and adequate access. Already 24 workers had died on site.

Building had sent David Bishop, “one of Britain’s most experienced stadium builders”, to inspect two of the stadiums in Rome and Milan and report on the state of play. Bishop had been expecting to see just a bit of “cleaning down”, but with only a month to go, the stadiums were still undergoing major contruction work. In Milan, the Giuseppe Meazza pitch was “unplayable” and vast areas needed to be relaid. In Rome (right) eight cranes were still on site lifting materials into the stadium and there was no signage, telecommunications, electric wiring, access roads, and no surfacing of roads or car parks. And the roof wasn’t on. Bishop was taken aback by the lack of urgency among the workforce. But at least the stadiums opened on time even though neither of them was entirely complete - which is more than can be said for the Wembley rebuild. West Germany won the competition - knocking England out in the semi-finals.