In the UK’s newly recovered economy there is plenty of work for this year’s top 150 consultants, allowing them to pick and choose what they bid. Next on their To Do list is finding qualified staff to do it, and making it turn a decent profit. Louise Dransfield reports 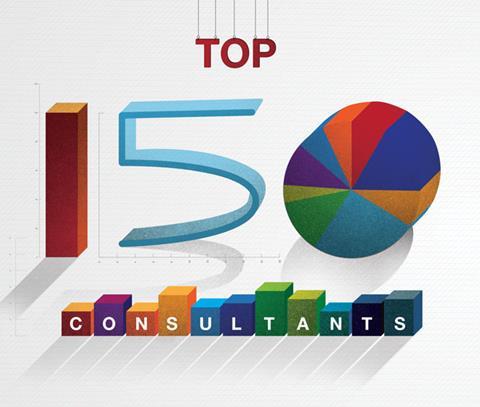 Among this year’s 150 top consultants, optimism reigns supreme. Although by no means forgotten, the depressed years of recession are definitely gone, with 67% of the top 150 feeling optimistic about the UK’s economic outlook, and 58% expecting trading conditions to improve over the next year. The industry is busy – very busy – and, as Atkins’ divisional business development director Liam Harrison says, “preparing for things to get busier”.

This new, work-rich environment is changing the power dynamics of the industry. More than anything, consultants are becoming ever more choosy over what jobs they take on – and at what price. As Vince Clancy, chief executive of Turner & Townsend, says: “Most consultants are in a place where they are being more selective around what they are bidding for and the rates at which they are bidding.” Likewise, Duncan Berry, managing director of consultant DBK, says his firm is being “a little bit more selective with who we work with, which allows us to make sure fees are at the correct margin in order that we can make more of a profit.”

So what does this trend mean for the industry’s consultants and their clients, and what other issues are they facing in trying to make the best of the rebounding market?

Plenty of choice
Simon Rawlinson, head of strategic research and insight at EC Harris, says consultants’ ability to pick and choose their work is principally driven by an inbalance between a limited “availability of resource” for consultants and a large volume of bidding opportunities, but is also influenced by the consultants’ need to look after the interests of strategic clients. This, he says, is making it “really hard for clients with less of a profile to secure the first tier [on a project] whether it’s a contractor or an adviser”.

Derek Pitcher, managing director Europe at Sweett, believes that there is enough in the pipeline to keep everyone busy for the next year or two, adding that there is still a “lot of investment money out there looking for projects to invest in”. However, he feels the market could do with a little bit of regulating to be able to ease the fluctuations in workload.

And this slowdown may come from consultants themselves. While the ability to pick and choose seems like a good thing for now, it may be putting a slow chokehold on the overall flow of work in the industry. “People will choose not to proceed with a project because they cannot get the team that they are looking for or cannot get the price or they can’t get it delivered on terms that are reasonable to them,” Rawlinson says.

As Building reported last week, soaring construction costs are contributing to this. Turner & Townsend’s Vince Clancy says that the huge increase in demand is increasing project delivery costs to a point where the “affordability of schemes will come into question”, and while he sees no slowdown on the horizon for at least another year, he questions how long that can continue.

Atkins’ Harrison agrees that the industry needs to look “to make sure that there’s a long-term view taken. So we prioritise projects sensibly to avoid the peaks and troughs and uncertainty”.

“Having built up skill bases around particular sectors it’s ridiculous if work drops off or if planned work doesn’t happen when planned as we have to reallocate those skills elsewhere or we lose those skills to other markets”.

Plenty of money
While the UK economy is so far holding steady, this last year has been marked by global economic turmoil. The “Grexit” crisis brought Europe to the brink of catastrophe, the US is wrestling to deal with its debt ceiling and the Chinese stock market falls are causing chaos in the world’s markets as the country attempts to devalue the yuan.

Even so, “the Great Fall of China” is unlikely to have a large negative impact in the UK because the country is in the “rarefied position” of being a stable and safe place to invest, primarily due to its proper legal and property ownership systems, Chris Bennie, principal at architect TP Bennett, says. He says that means that the UK will always be “high on the target list of most overseas investors”.

Reports suggest that private Chinese investors are already removing their money from China and seeking to invest in UK and European property, echoing the reactions of wealthy Russians in 2014 when the rouble began to collapse after sanctions were imposed on Russia for the annexation of Crimea.

Bennie adds that competition is now enormous for development sites and there is a lot of overseas private equity money around, which is particularly driving the residential and office investment markets. There are, quite simply, he says “more pounds chasing opportunities than there are opportunities to go round”.

Such foreign investment in London is nothing new, but this investment coming into the capital looks now to be spreading out to the regions.

Big firms will always look to move large parts of their businesses outside of the capital as London gets overheated, Bennie says.

Talking to consultants who sit in the top 150 it is clear that most agree London is still the engine powering the UK along, but the major regional centres, such as Manchester, Birmingham and Leeds are seeing a massive upswing in activity, driven, DBK’s Duncan Berry says, by the “investment market seeing that there’s probably good value outside of London”.

Pitcher says that he is starting to see clients look outside of London as it’s difficult to get a return in the capital when you have to pay so much for the site before taking into consideration the cost of construction.

Scarce profit
Although there is plenty of money around (depending on where you’re working), that does not necessarily translate into fat profits.

The ability to be selective has started to feed through to profitability and the survey shows fees and margins are increasing, with fee income for the top 150 rising by 13% to £7bn up from £6.2bn for 2014. However, they are still not at the level consultants want to see.

According to AKT II director Gerry O’Brien, this is because, although fees have risen, costs have risen faster: “Salaries [are] rising sharply and fees [are] not recovering at the same rate, which is putting a squeeze on profits”. For David Cash, chairman at architect BDP, the recovering market retains enough competitiveness that it is keeping the level of fees low.

Steve Smith, board member and UK head of highways at WSP Parsons Brinckerhoff, says “clients expect us to provide cost effective solutions on their projects and that’s never going to change”.

In particular, some consultants say that public sector bidding remains “cut-throat”, as government cutbacks continue to limit spending power. This has resulted in some firms such as DBK and AKT II pulling back a little from public sector work.

Margins have improved slightly from last year because utilisation is higher and productivity is better, but again the impact of staff costs and resource capacity is stunting growth.

Scarce skills
Despite the various market pressures, consultants in the top 150 have increased their UK-based staff numbers this year – by over 26% to 82,000, up from 65,000 in 2014, with the number of chartered staff on the books rising by 21% to top 35,000. Consolidation plays a large part in this increase with the likes of WSP acquiring Parsons Brinckerhoff from Balfour Beatty in late 2014 and Arcadis taking over Hyder Consulting.

Yet staffing in terms of resource and cost is a big issue for the top 150 consultants with many saying that it is the middle area – those with skills and experience who can come in and get straight to work on projects – where resource is scarce and staff acquisition is at its most competitive.

The recession, and the way firms reacted to it, is largely to blame, Smith says. “In the years 2008/09 a lot of firms were trying to retain the staff they had and weren’t hiring new grads out of school”. This has resulted in a shortage of this middle-level staff as those who graduated during the recession had the start to their working life delayed. “The shortage of the middle management layer is a direct result of this lack of investment at the time,” Clancy agrees. It is this gap, according to AKT II’s O’Brien, that is “one of the main things reducing the opportunity for growth for medium-sized companies”.

This means that as well as salaries increasing, firms are having to put a lot more effort into retaining as well as attracting the right people and this, Berry says, has caused consultants to look again at “the softer aspects such as benefits and flexi-time working”.

For most of this year’s top 150 consultants, attracting and retaining staff is also about having interesting projects, the right opportunities and a good team environment to create an attractive lifestyle – TP Bennett, for example, recently took all its staff to the Edinburgh Festival.

BDP’s Cash says that, these days, “in order to recruit good people you need to be doing a lot more than just offering a shed-load of money.”

So despite the general air of optimism and high work levels there are challenges in the form of increasing costs and decreasing capacity and resource, all of which has Cash – and surely many other top consultants – wishing he had a “crystal ball” to keep an eye out for further challenges ahead.

Barbour ABI, provider of construction intelligence services and Building sister company, contacted more than 500 firms for this year’s Building Top Consultants’ Survey. They were sent a survey form asking for details on the number of chartered staff, non-chartered and technical staff, and domestic and worldwide fee incomes. Firms are ranked according to total UK chartered staff, and for QSs, architects, engineers and project manager by chartered staff in each respective discipline. Practices were also asked questions relating to: staff recruitment, wage patterns, margins, areas of work, and work expectations.