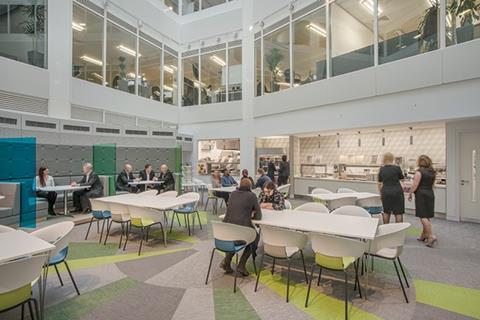 Fit-out specialist BW is confident of hitting its target of doubling turnover to £200m by 2020, despite experiencing a dip in market demand following the Brexit vote.

Speaking to Building, BW’s chief executive Steve Elliott said the firm was growing into new areas from its core offices sector - including university work, major projects and the public sector - as part of its five-year expansion strategy.

The firm has also poached former Morgan Sindall regional managing director Rob Frank as its new customer experience director and moved into new offices it fit out itself at 5 Old Bailey in the City, which provide space to grow into.

Elliott said the fit-out sector “was very quiet” in August in the immediate aftermath of the EU referendum, but demand had since bounced back, albeit at a slightly reduced level of around “5% down on before”.

Elliott said BW’s comparatively small size - relative to the London fit-out market’s “two giants” ISG and Overbury - should enable it to “grow [market share] regardless of the economic situation”.

He added: “We only need change, not necessarily firms moving. If a firm wants to upsize or downsize, or upgrade their office, existing building work is good.

“We are sensationally supported by clients. The target is very do-able.”

Earlier this month, BW picked up its first major universities work - two lots of a framework for City University in London, covering projects worth up to £2m and between £2m to £8m - and is hoping to win a bigger share of the around £500m-a-year London universities market.

Within the offices sector, BW is picking up more work with law and banking firms. The firm has recently completed the refurbishment of law firm Watson Farley & Williams’ 70,000ft2 headquarters in Appold Street, London (pictured).

BW is planning to open a second office in the Thames Valley, probably in Reading, to cover projects in the south of England outside of London, potentially in the first half of next year. Around a third of BW’s work already comes from this region.

Anthony Brown, BW’s sales and marketing director, said the dip in demand caused by the Brexit vote could end up being positive if it has “forestalled the next boom and bust cycle”.