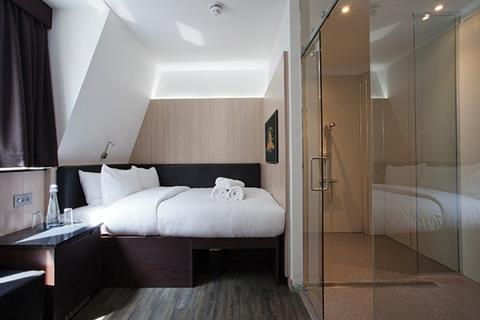 Sturgis Carbon Profiling’s research into the hospitality industry with The Portman Estate and Z Hotels has revealed that the methods used to tackle energy use in hotels may soon not be enough.

The hospitality industry has implemented most of the significant measures available to reduce the energy demand in hotels. However, despite its best endeavours, returns are becoming incresingly marginal. Any further gains will be to the detriment of the guests’ comfort, something that is unpalatable in the hospitality industry.

In this article we illustrate the different approaches to reducing the carbon footprint, analysing measures that are already implemented by most hotels and the results achieved. Subsequently, we will demonstrate how a series of less invasive options can be introduced. These will leave the guests unaware of the reduction in carbon emissions and keep satisfaction high.

Recent research that we have conducted in central London has revealed that a complete rethink of accommodation could be the solution. By focusing on space redistribution, easily maintained finishes and specification of carbon-saving options at the design stage, this research suggests that there is potential to reduce the carbon footprint by 68% without costing hotels a penny.

Broadly, the term “embodied”refers to carbon produced during manufacturing, construction and maintenance of a building, while “operational” identifies the carbon emitted by heating, cooling and generally running the building.

The baseline study is a three-storey newly built hotel, with reinforced concrete structure and aluminium rainscreen cladding. It has approximately 80 bedrooms, most of which are double. It is estimated that the average room is 21-25m2 and the occupancy rate is 80%.

Scenario B - operational only focus

This scenario represents the mainstream approach to reducing carbon emissions, as presently undertaken by the hospitality industry. It includes low-emission light bulbs, high-pressure low water usage showers, key activated power to guest rooms and “Switching on to Switching off” programme, which is designed to raise awareness of energy use in the workplace. 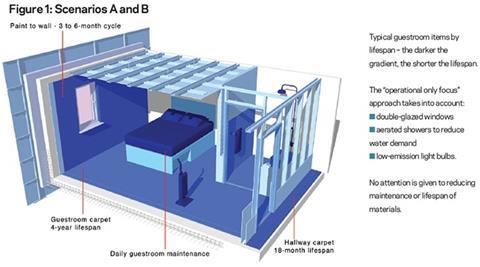 This approach has been developed in conjunction with Z Hotels and is based on a reduction of maintenance and increase in efficiency of design and space. The driving concept behind it is the increase in density of hotels, with the reduction of the individual unit from 20-25m2 to 16m2. While maintaining a luxury finish, this is delivered via modular design. The space is saved by better organisation and suitable bespoke furniture to fit a more compact layout. Furthermore, the specification targets more durable, less maintenance-intensive materials, as well as focusing on the construction of the building itself. 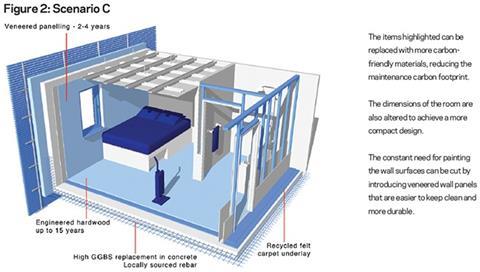 03 / Efficiency of design in hospitality

A brand new hotel should take into consideration some simple measures to reduce the embodied carbon emissions of the building. These, if considered at design stage, will not compromise the final result - and as we have demonstrated on various projects need not influence the overall cost either. However, they can save a considerable amount of carbon over the life of the building. The embodied carbon of a typical new build accounts for about 40% of the overall emissions. A 30% carbon reduction can be achieved through strategies such as the use of natural materials for cladding or insulation, higher recycled content for specified metal components and plasterboard, or changing the type of aggregate in the concrete (such as regraded aggregates from demolition sites).

The continued maintenance and refitting that a hotel undergoes throughout its life produces as many emissions as operational energy. For example, walls are repainted every three-to-six months, carpets in hallways and common areas are changed every 18 months, and there is a stream of broken furniture to be replaced, linen to be renewed and lights to be swapped. Once again, through design and specification of durable materials, the cost of maintenance in carbon terms can be almost halved. For high passage areas, such as the reception and lobby, stone floor finishes provide aesthetic benefits, are relatively easy to maintain and very durable and individual tiles can be replaced easily with minimal disruption. In some areas, such as bedrooms, stone floors are not an option. Engineered hardwood finishes can be a viable choice, with a 10-15 year guarantee of durability for most products. Where carpet is desired, specifying recycled felt underlay could have a significant impact in reducing carbon emissions without compromising the look.

Money should be spent on features that will contribute to the wow-factor without being worn or in regular need of replacement - for instance chandeliers or art features in the lobby. Hotels do not need to be spartan to be low carbon.

The most important concept to explore is space distribution, with high density achieved through well-planned rooms and an efficient back of house. Z Hotels has been rethinking the hotel model, with compact layouts in central locations that maintain the high quality expected by guests, reducing cost per stay and ensuring high occupancy rates.

Although the current scenarios refer to newly built hotels, the core concepts can be applied to retrofitting and refurbishing, including for most of London’s central hotels. This is being put into practice by The Portman Estate’s refurbishment of several listed hotels on Gloucester Place. Sturgis Carbon Profiling assessed the proposals, and is supporting the design team in reducing embodied carbon, in addition to a reorganisation of space based on the Z Hotels concept. 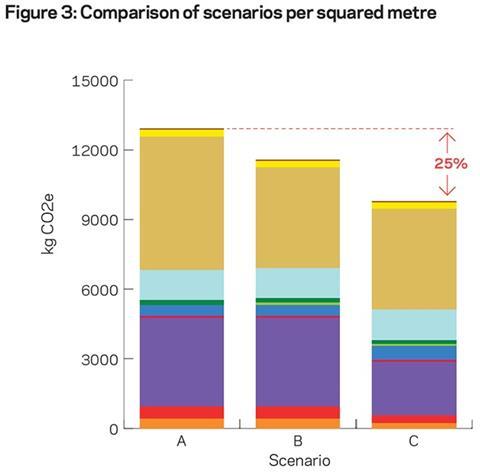 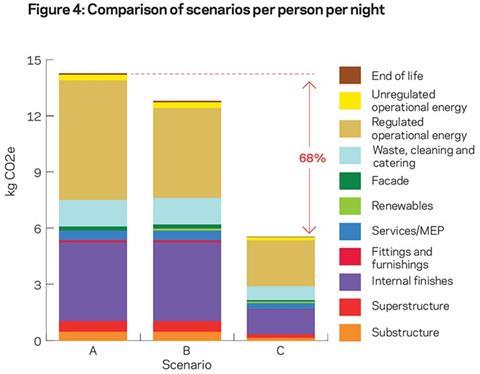 The graphs above shows considerable differences between the whole-life carbon of the three scenarios. The most pertinent findings are as follows: 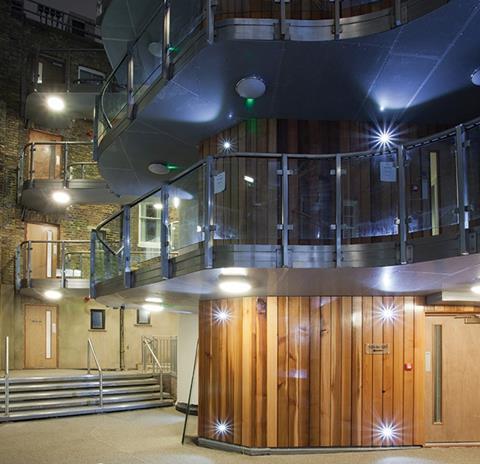 In light of the findings above it is clear that a radical rethinking of design, density and materials is necessary to tackle the pressing need to reduce carbon emissions.

The hospitality industry has made progress in addressing carbon emissions, but it is clear that the focus at the minute only goes so far, and that time and effort would be more efficiently spent pursuing alternative design philosophies.

The chart above plots yearly carbon emissions over the building’s assumed 60-year life cycle. There is a reasonably constant level of emissions arising from operational and maintenance impacts, while peaks correspond to embodied carbon expenditure from replacement and refurbishment. The trend of emissions reducing over time reflects projected grid decarbonisation.

We would like to thank Michael Jones from The Portman Estate and Bev King from Z Hotels for their assistance and advice in preparing this article, as well as Christina Stuart and Gareth Roberts of Sturgis Carbon Profiling