In the latest of our whole-life cost comparison articles, David Weight of Currie & Brown examines the crucial financial considerations when deciding the height of an office block

There are a number of reasons why developers and owner-occupiers would wish to consider developing taller buildings. These include greater prestige and image, as well as the advantage of this enhanced prestige promoting the surrounding area and encouraging further development.

However, the most common reason for developing taller buildings is better land use. With increasingly limited land, it makes sense to build taller to maintain growth while limiting urban sprawl. But the rental sector’s equivalent of a building’s sales value, the capitalised gross development value, may not be a true reflection of the building’s whole-life value because some of the longer-term benefits and liabilities are not always fully appreciated by clients or tenants. Here we compare the whole-life costs of developing four-storey and eight-storey buildings and see what effect the change has on developer profit margins. 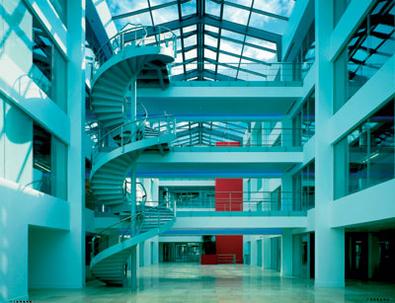 Marlow International, a four-storey office building in Buckinghamshire, was developed by Akeler and designed by architect Aukett

The whole life costings presented here are based upon Currie & Brown’s Live Options software, which is an integrated suite of geometric, engineering and energy calculation programs. Whether the development is an office, school, hospital or warehouse, the process starts in the same way, by using a basic but faculty-specific design template. This template is modified to incorporate, for example, changes in the size, shape, and operational performance.

The program integrates fabric and building services components and can show how costs change when a building element is changed, for example increasing the proportion of glazing in the facade. It does this by providing a detailed breakdown of changes and shows the capital costs of physical items and the effect these have on building performance.

Any changes to heating and cooling loads will be quantified in terms of the effect this has on, say, chillers and the electrical supply loads.

Changes to the energy profile of the facility are also calculated. The program uses this data to assess the cost effectiveness and overall viability of alternative solutions when considered against the facility’s projected economic life.

The model also takes account of repair and maintenance costs. This includes regular inspections and planned and unplanned maintenance and replacement costs for individual building components. These costs are automatically cash-flowed, discounted and summarised and net present costs are shown against each component, which assists in making choices and in value-engineering.

Shown opposite are the typical capital, energy and repair and maintenance costs for a typical deep-plan, four-storey, air-conditioned office building with a gross floor area of 12,000 m2.

Since land use is such an important economic driver for this scenario, this time we have included a view on the development profitability below, based loosely on a location in Sussex. The building has gross-to-net floor area of 80%, which equates to 9600 m2: at 12 m2 per person that adds up to 800 occupants.

The graph below assumes a rental value of £22/ft2 a year and 6% net yield. 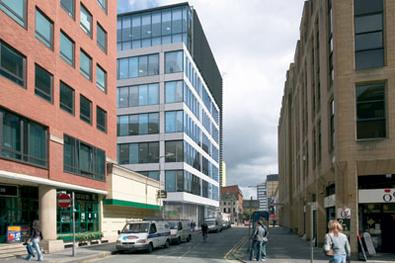 Scenario one: Increasing the building from four storeys to eight storeys - capital costs

Here, we compare a four-storey building with an eight-storey alternative of similar gross floor area. For this scenario, changes were needed for just four inputs as follows:

Changes to the capital costs

The capital cost changes in the graph (see attatched graph) are explained as follows:

The extra cost of going from four to eight storeys allowing for increases of 3% design and price risk and 5% construction contingency and a reduction in net-gross ratio and associated occupancy is £780,100.

This extra cost is less than cost statistics might lead one to believe. However, statistics often do not always reflect “like for like”. As areas with high property and land values are more likely to have tall buildings, the construction standards will be higher as well, whereas our study assumes that the construction quality is unchanged.

Scenario one: Increasing the building from four storeys to eight storeys - energy costs

Before reducing the net and occupancy level, the extra energy cost of going from four to eight storeys was calculated at £2430 pa. However, reducing the net and occupancy level showed a saving of £2820 pa, resulting in a difference, and overall saving, of £390 pa. This is because in most modern buildings, most energy consumption is driven by occupancy (breathing, metabolic gains, use of computers, printers, hot water usage, use of lifts, etc).

To explain the changes to energy consumption:

Scenario one: Increasing the building from four storeys to eight storeys - repair and maintenance costs

Finally, to illustrate the financial incentive in exploiting land, let’s consider doubling both the gross floor area and the height, so that the total footprint is unchanged compared with our base building.

To do this, four inputs are required from the original base scenario:

The changes, in cost/m2 terms, are similar to those illustrated previously, except that, unlike the first change scenario, the building’s floorplate at each level is not reduced, and the wall-floor and window-floor ratio is unchanged this time. This scenario may well be unrealistically large in scale, but for the sake of simplicity, is assumed to be viable, and assumes the same net area and therefore value.

In this example, the net profit has increased dramatically, as the land cost is less significant, although the profit margin has hardly changed. However, the rate of return on capital employed is slightly less.

At the introduction, effective land use was cited as a key driver in deciding how tall buildings need to be. But there are social concerns that are not addressed by conventional economic criteria, even when whole-life costs are considered over 30 years.

So what does this mean? When we look at infrastructure projects such as water pipelines or sea defences, longer periods are considered, and spare capacity is often built in - or taking another example, road construction often allows for extra lanes to be added at a later date. So perhaps the structural elements of new buildings, especially public buildings, should be designed so they can be extended upwards in the future.