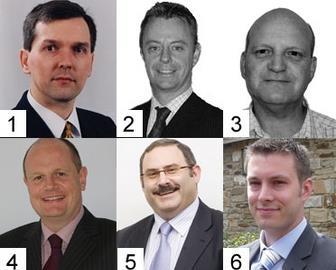 Geoff Sheard (1), Fläkt Woods vice-president of fan technology, has been elected to the board of the Air Movement and Control Association International (AMCA), its first Europe-based director for some years.

Buro Happold has appointed Steve Ogden (2) as director of building services and Michael Parkinson (3) as specialist lift engineer, both at the firm’s Manchester office.

Design, engineering and project management firm Morgan Professional Services has appointed Enzo Adamo (5) as national design and operations director at the firm’s Stratford-upon-Avon head office. Adamo joins from Waterman International, where he was a director based in the Dubai office.

Steven Gowland (6) is the new north-east sales agent for Smith’s Environmental Products, supplier of domestic and light commercial fan convectors in the UK.

Robert Pannell has joined Zero Carbon Hub as head of house building. He is to oversee the Hub’s energy efficiency work stream which will facilitate the delivery of mainstream low carbon homes. Pannell was formerly director of Production UK at Taylor Woodrow.

International engineering, construction, services and investment group Balfour Beatty has appointed Andrew McNaughton to the new role of chief operating officer and to the board. McNaughton will oversee Balfour Beatty’s construction and engineering activities in the UK, the Gulf region, South-East Asia and the group’s worldwide rail business.