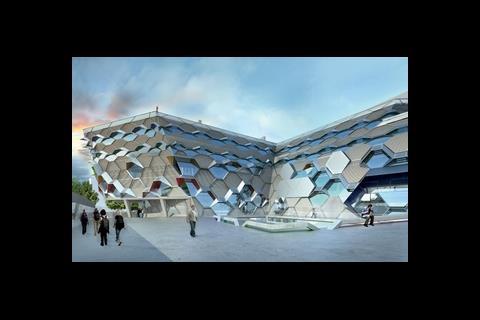 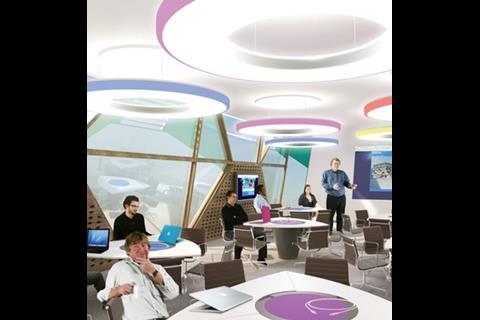 Students will be grouped in clusters rather than rows. 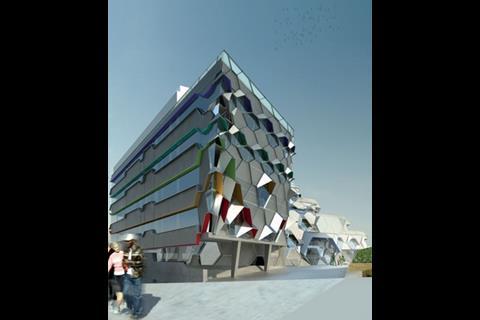 Hexagonal aluminium hoods on the south facade of the north lock. 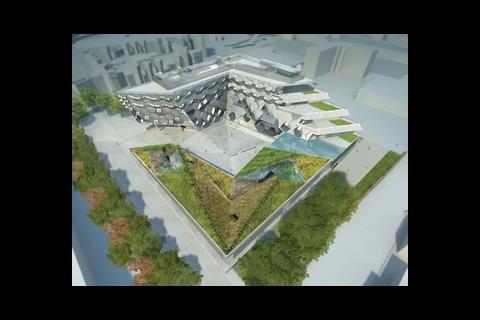 Photovoltaics on the north block terraces are for study rather than an integral part of the services.

Engineering can be sexy, is the message embodied in Coventry University’s new faculty building. Its sustainable design will be a teaching aid too

Coventry University’s new faculty building by Arup Associates is intended to make engineering sexy again – to challenge the perception of architecture as a more glamorous discipline, and give new fields such as computer science a run for their money in attracting students.

Fresh thinking about ways of teaching and learning is central to the design of the £60m Faculty of Engineering and Computing, now on site for completion in spring 2011. The latest green technology is employed not only to create a sustainable building, but to teach students about the techniques (see facing page).

The faculty consists of two linked L-shaped blocks, representing science and nature. Classrooms are located on the first and second floors of the six-storey north (science) building, while the two-storey south/nature building, with its green roof, houses three lecture theatres.

Dipesh Patel, a director of Arup Associates, says: “We have designed spaces to facilitate new ways of teaching engineering, based upon collaborative learning. Gone are the days of lines of desks with a lecturer at the front of the classroom. Now, students will work around bespoke desks in groups of six, to study and solve problems together. They will be able to interact with staff from a variety of disciplines in open tutorial support zones, as well as manufacture their designs in an open-plan engineering workshop.”

But the heart of an engineering school is its practical study areas. At Coventry, the 2200m2 workshops, covering the lower-ground floor of both blocks, will be open-plan except for areas housing particularly noisy or dirty activities. The aim is to encourage students from different disciplines to interact, and a mezzanine level with IT support is intended to further foster that.

The workshop area will be a showpiece to attract students. That is why a Harrier Jump Jet will be parked in the middle of the space. “Visitors will be drawn to a large picture window off the courtyard, which looks into the workshops,” says Patel. “Other visual links via voids and glazed floor panels will constantly connect students to the practical engineering going on in the workshops.”

The design team and academics worked together to break away from the traditional didactic methods of teaching. Classes will not be focused on a lecturer standing at the front of the room. Instead, tutors will circulate and use a variety of devices, including whiteboards and flatscreen displays, to help student groups to solve practically focused projects.

The largest lecture theatre will have 250 seats in clusters of six, echoing the classrooms. “Studies have revealed that a group of six is the optimum number at which people work together co-operatively; more than that and they tend to split into factions,” Patel says. “So the faculty’s class sizes will be multiples of six – 24, 42 and 60 – and the classroom layouts are designed to sit people in groups of six around three-sided desks.”

The two smaller lecture theatres will present the biggest challenge and potentially most reward for users. Located back to back, the semi-circular rooms appear reasonably conventional. It is only when the dividing partition is removed that the full extent of Arup Associates’ innovation will dawn on lecturers. “They will have to teach in the round,” says Patel. “Initially it could be daunting to be surrounded by students, but having to perform, to be more mobile and demonstrative will bring great benefits to both teacher and student.”

Circulation and spaces for the downtime between lectures is another area that was examined by the academics and the design team. Patel says: “We looked at numerous international models for university design and realised that students need different kinds of space in which to work and relax. We want them to enjoy being in the educational environment and to spend more time there.”

So the circulation areas will contain an interactive zone, a “digital world” and workspaces known as the Planets. The interactive zone is a cafe-like space on the ground floor where lecturers will be on hand to help students with problems. The first-floor digital world is similarly informal, providing access to computers outside the classroom for single students or groups.

Teaching outside the box

The Planets are set apart from the main circulation areas but linked by bridges across the atrium/stairwell. They are designed for teaching and student-initiated group work.

“The Planets provide an alternative to the classroom if a lecturer fancies teaching in the buzzing atmosphere of the atrium,” explains Patel. “Alternatively, they are nice spaces for the students to chill in when they are between classes. The key is that they are flexible.”

The upper two floors of the north building contain the lecturers’ offices, housing two or three staff per room. Glazed fronts will further encourage interactivity, as will communal kitchen areas. When staff require somewhere private, they will be able to use the “monk” rooms or “crystals”, portable transparent cells on wheels with enough space for one or two people to pop in and work or chat privately.

The design of the faculty building challenges many educational traditions: it will force lecturers and technicians to interact more with students, and encourage students to stay longer in the building. This could be read as a recipe for disaster by the jaded lecturer, but the university believes it will create an exciting atmosphere for learning and produce a new generation of enlightened and enthusiastic engineers.

Learning with the building

Education was the driving force for the design of the 14,400m2 Engineering and Computing Building, but environmental considerations were important too. Patel and his team are using established passive techniques, such as natural stack ventilation in the six-storey north block and thermal mass insulation in the partly buried south block, but they are not afraid to challenge accepted thinking.

The north block is clad in aluminium, installed on a 330mm deep section hexagonal timber frame. “Aluminium makes sandal-wearing environmentalists crazy,” says Patel, “but I worry about tokenistic eco-architecture and the timber-clad buildings springing up in all of our cities that are perceived as green.

“Timber is rubbish as an external skin in the harsh city centre environment and the trend for using it will unravel as a maintenance time bomb.

The case for aluminium

“Conversely, everyone gets stressed about aluminium because of the huge amount of embodied energy required to make it. But if you look at where the main aluminium smelting plants are located, you find they are in Scandinavia, which means that they are powered by hydro-electrics. And, once it is manufactured, aluminium is a beautiful, fully recyclable material.”

Aluminium hoods are critical to the 40%-glazed south facade, which will harness solar energy in winter. Arup Associates conducted a study to understand the solar gain and shading throughout the year.

“We modelled it using square windows initially,” says Patel, “but hexagonal is more efficient because the shape of the hoods doesn’t impede views out like external shading devices for square windows would.” The non-glazed elements in the facade are packed with blown paper insulation.

Waste heat from IT servers will be used as underfloor heating on the upper-ground floor to pre-heat air to the AHUs and for the workshop air curtains. This will be supplemented by a biomass boiler. Water use will be minimised with low-water and waterless appliances, and rainwater will be harvested for irrigation, to keep the ponds on the roof of the south building topped up and for lavatory flushing. Hot water requirements will be supplemented by a rooftop solar hot water system.

“PVs still don’t make sense yet; they aren’t a viable option. The only PVs on the project will be installed by the students as part of their studies and hopefully they will help to advance the science to a place where we can start using PVs regularly,” says Patel.

Local fauna is catered for too. The neighbouring Whitefriars Abbey has a colony of pipistrelle bats, so Arup Associates is providing a tree-lined avenue as a route for the tiny creatures to fly along to the planted roof of the south block, where a roost for them is being built into the eaves. The planting specified for the roof is ideal for attracting the insects bats like to eat.