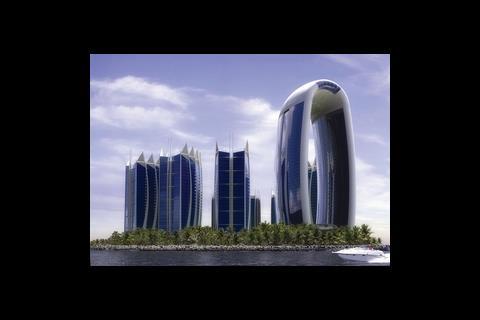 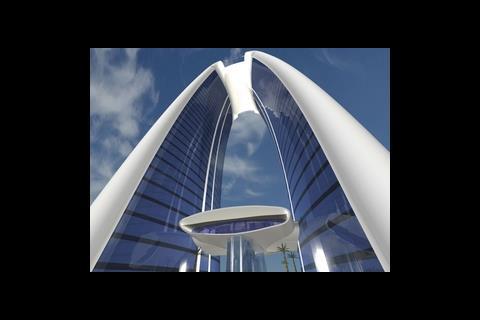 All the plant is integrated within the two legs of the hotel so as not to interrupt its sleek lines.

Jakarta’s Arch hotel, part of the Regatta scheme, is sure to rank as one of the world’s iconic buildings when it is built. But its striking design belies the straightforward services required within

One sure-fire way of putting a city on the map is to give it an iconic building. London has its Gherkin, Dubai boasts the Burj Al Arab and Bilbao the Guggenheim. Now Jakarta is aiming to join their ranks with its striking Arch hotel. The curvaceous 320-room, five star hotel towers 150 m above the shores of the Java Sea and features a ballroom for a thousand guests, a state of the art health spa and four restaurants, including a 2000 m2 sky lobby.

As the centrepiece of the 11-hectare Regatta development (a mixed-use development situated on the Pantai Mutiara Canal Estate), the Arch will be surrounded by 10 fully serviced residential towers that will be built in three phases. As the name suggests, the development follows a nautical theme, with the hotel being representative of a lighthouse or 'beacon' and the apartment towers as tall ships sailing around it.

According to Trevor Godding of Atkins,the architects and multidisciplinary design engineers on the scheme, the brief for the design of the hotel was very clear: it had to have minimal impact on the city’s infrastructure and be suitable for a multinational hotel chain to take on.

So, while the building has clearly been designed to be striking to the eye, the services had to be straightforward, robust and easily maintainable so that they would appeal to an international hotel operator.

As you’d expect in a city with year-round temperatures averaging in the high 20s and daytime humidity levels hitting above 90%, year round cooling was a prerequisite – there is no heating requirement – and the hotel will be installed with 12 MW of cooling capacity.

To maintain the building’s sleek lines, no plant could be located on the rooftop. Instead, the services team have had to integrate the cooling towers into the two ‘legs’ of the building. These will sit in double height plant spaces around two-thirds of the way up the building and hidden behind louvres built-in to the main façade. The main chiller plant is located in basement plant areas – although there were concerns about going down this route following the tsunami.

“Obviously if another tsunami struck, the basements would flood and the plant would be destroyed but after considering the commercial risks and building in flood defences, the client decided to go down this route,” says Godding. Other plant rooms are located a third of the way up each ‘leg’, effectively splitting the building into manageable zones for servicing.

A key requirement from the client was 100% standby electrical generation plant – with no load shedding – due to the fluctuations in the local supply. CHP had been ruled out in the early stages on grounds of cost and also because it was felt there was insufficient local expertise to operate it. Instead, standby electrical generation will be provided by diesel generators –

3.5 MVA for each phase of the residential schemes and 9-9.5 MVA for the hotel. These feed into the site’s 20 kV distribution network, which is fed by multiple incoming feeds, before stepping down to the 6.6 kV low voltage distribution.

Another issue was the availability of gas to the site. Gas is essential for the restaurant kitchens and propane is being supplied from storage cylinders via a dedicated riser to the four kitchens.

However, for the domestic hot water generation, Atkins has designed a system that uses small heat pumps to extract heat from the return condenser water circuit. This is then boosted using electrical heaters. The same system is also being used to supply hot water to the public toilets. “We debated whether it was necessary to install hot water in these areas, however we have left the final decision up to the hotel operator that takes it on and it can be detailed out at a later stage,” says Godding.

To reduce the development’s impact on the local infrastructure and limit discharge into the local drainage system, sewage treatment will take place on site, with a mains sewer connection providing a back-up overflow. Grey water from wash hand basins and showers is treated and re-used for toilet flushing while rainwater is harvested across the site and used to supplement the incoming mains water supply.

Detailed design of the scheme has now been handed over to a local contractor and work has begun on the first phase of the project, the four luxury apartment towers, which are due for completion towards the end of 2007. The hotel is scheduled for construction in the later phases and should ensure Jakarta joins the ever-growing list of cities with iconic buildings.