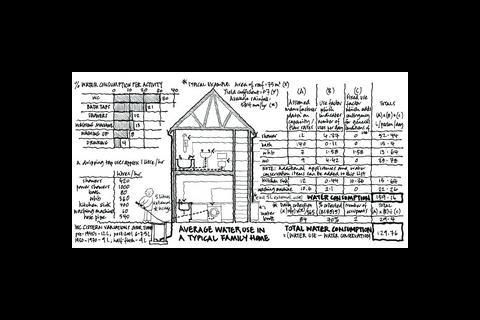 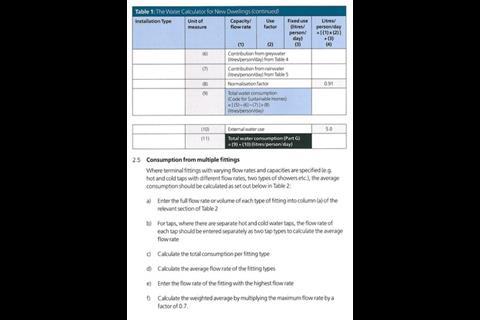 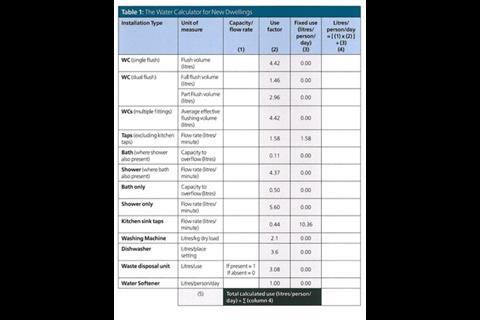 The revised Part G puts the emphasis on efficiency. An explanation on the part played by the new water calculator

The new Building Regulations (England and Wales) Approved Document G explicitly states that not only should water be used less profligately than it is at present, but also that designers must provide evidence to that effect.

Regulation 17 states that local authorities will be within their rights to withhold a completion statement until a certificate specifying the calculated water consumption has been submitted. It is important to realise that this certificate will not indicate the actual water consumption within that dwelling – how could it? It is merely a guesstimate in the same way that the energy performance certificate frequently bears no relation to the actual energy usage.

The new Part G was due to come into force this month, but BSD understands it is now expected to be delayed until April (see news, page 8). Previously titled simply as “Hygiene”, the latest version is titled “Sanitation, hot water safety and water efficiency”. It applies to the erection, extension and material alteration of a building, not just dwellings. In fact, the new Part G will apply to all new buildings – and building designs – approved after it comes into force, except where:

¦ work has commenced before that date; or

¦ a plans certificate has been given before that date.

Even though the word no longer appears in the title, hygiene is still an important feature of the new Part G. For example, a sink must be provided wherever food is prepared, a recommendation not previously included. But it is the performance targets that make this document stand out.

Part G now sets a target limit of 125 litres of water use per person per day, which is only 25 litres or so per person less than that currently used in the average household.

Advocates of the changes point out that it ought not to be too onerous to make such reductions. Already, housing associations are installing smaller baths, and dual-flush WCs are now common, cutting the water use from 9l per flush to 4l.

The 125l domestic target includes 5l per person per day for outdoor use – watering the garden, say – so dwellings without a garden could consider omitting the external use quota and work to a target of 120l per person per day. This is the equivalent of level 1/2 of the Code for Sustainable Homes (CSH).

One of the important stipulations of the new Part G is that all washing, cleaning and drinking outlets must have “wholesome” water, which is water that is supplied to a building for domestic purposes such as cooking, drinking, food preparation or washing. It used to be called – and within the CSH, it still is – potable water.

“Non-wholesome” water includes water for flushing and laundry use, such as:

The last revision of Par G was in 2000 but it has not really changed since 1992. The code for Sustainable Homes, on the other hand, has been revised every six months.

¦ water abstracted from wells, springs and other natural sources

¦ reclaimed greywater (treated waste water), which can be used for WC flushing and for washing machines

¦ reclaimed industrial processes – such as air-conditioning condensate – which can be used in carefully controlled circumstances in buildings other than dwellings.

Hot water must be provided to all washbasins, showers and fixed baths in sanitary conveniences and residential accommodation. To minimise the risk of scalding, there must be thermostatic controls on bath taps to keep the temperature to less than 48C. About 20 people die every year in the UK as a result of bathwater scalding in their homes.

Rhianna Hardie, an 18-month-old girl, suffered fatal burns when a tank with a faulty thermostat collapsed and flooded her cot. In the light of accidents such as this, when metal or plastic cisterns are replaced or upgraded, the supports must also be upgraded to provide “adequate” structural support capable of supporting the cistern when full to the brim. In addition, any hot water storage container should have two safety devices to prevent the temperature of the water, which may become pressurised, exceeding 100C.

As mentioned earlier, a “water efficiency calculator for new dwellings” (see left) must be used to assess the notional water consumption. The water calculator tells us intriguing statistics, such as that we fullflush a dual-flush toilet 1.46 times a day.

Each water-using fixture or fitting has to be assessed and its capacity in litres, or its flow rate in litres per second (taken from manufacturer’s data), entered in a table. Multiplying by a use factor gives a figure for the amount used per person per day. The figures are added together to get the total water consumption of the home, which is divided by the number of occupants to give the per person rate.

Any recycled or harvested water is discounted from the total and the external water use factor of 5l per person per day is added to give the full and final total water consumption rates.

Non-fixed flow-reducers, such as the water-saving Hippo for WCs, should not be included in the calculations as occupants can easily remove them and distort the water-use rating results.

It is clear that the new Part G is chasing, to some extent, the Code for Sustainable Homes, which sets clear standards for the environmental performance of dwellings. The water element is a mandatory aspect of the final rating – from the least environmentally sensitive level 1 to the notionally zerocarbon level 6.

The last revision of Part G was in 2000 but to all intents and purposes it has not really changed since 1992. The CSH, on the other hand, has been revised every six months. Whether this rate of change is itself sustainable, only time will tell, but as a more flexible, responsive document it is likely that the CSH, rather than Part G, will push designers in the direction of water efficiencies in future.

Austin Williams is the architectural producer at NBS Learning Channels and author of Shortcuts.