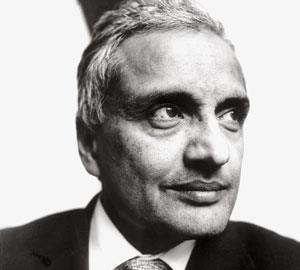 An impassioned communicator himself, the RIBA president believes services engineers need to let the wider world know what they have to offer. He tells Krystal Sim what he would do if he were president of CIBSE

Sunand Prasad, president of the RIBA, has some advice for the engineering community: stop selling yourselves short. He believes communication, or the lack of it, is holding the sector back.

“I’ve often wondered why environmental engineering isn’t attracting more people,” says Prasad, 50, co-founder of Penoyre & Prasad architects. A voluble and impassioned communicator himself, he believes the term “services engineer” is not fit for purpose any more. “It’s about communicating the right thing. Building services is just one facet of the story. I think ‘environmental engineering’ says it much more. The word engineering should be in there. It’s a beautiful word.”

While he concedes that architecture is often seen as the fashionable side of the built environment, he enthuses about the engineering sector, particularly given its “important environmental agenda”.

“If I were president of CIBSE, I would consider who could tell the engineer’s story better. How does engineering work? How does it deploy resources in the least damaging way possible? How do we engineer our comfort, creating the best conditions for human beings to operate in? Whether that’s [achieved] through the work of artists, dramatists or brand experts, I don’t know. PR gets a bad name for telling stories that don’t exist, but it’s a bigger crime to fail to describe something wonderful.

“What the profession has to do is to seize hold of the idea of communication, and make it central to its concerns.

There are such rich stories to tell, and CIBSE and the profession at large haven’t paid enough attention to communicating them. They have almost accepted simply being part of the support group and need to raise their game. If the industry can nail that, then they’ll give architects a run for their money.”

Prasad is nearing the end of his term, and you might think that two years in such a prominent role would have made him a slick media operator. But his comments seem to stem from a genuinely held personal philosophy. When asked about his firm’s long-standing reputation for work in the public sector, the issue of social conscience arises.

“I’ve always felt ill at ease with the term,” he says. “If you’re a greedy bastard you won’t care about other people, but a true assessment of your own interests must conclude that they are linked with everyone else’s. That’s social conscience with a huge dollop of reason, and a fundamental sense of right and wrong, justice and equality. It’s a question of the will, courage, and the energy to do something.”

Prasad’s parents were involved in India’s independence movement, instilling in him what he describes as a “streak of utopianism”. The family moved to Britain in 1962, when his father was offered a job running a pacifist organisation in London. He studied at the University of Cambridge, with the intention of becoming a civil engineer. “I was obsessed with Meccano as a child. I was always interested in science and astronomy but I wanted to be a practical person, so I decided to study engineering.”

The profession needs to raise its game. There are such rich stories to tell and CIBSE and the profession at large
haven’t paid enough attention to communicating them

Prasad attributes his desire to be a “useful person to society” to his upbringing in central India in a sustainable community founded by Gandhi. “It was probably a carbon negative community,” he says. “Even in the early 60s we had methane digesters and solar cookers. At that point it was all about rural uplift and shaping a new India, post-independence.”

In his first year at Cambridge, he found studying engineering “too much like being back at school”, and wondered if architecture might be a better fit. “The architecture faculty was next door and I had a chat with Barry Gasson [architect of Glasgow’s Burrell museum]. He looked at my drawings and said I could have a place. It was like finding myself. I was comfortable in the world of design very early on.”

After Cambridge, Prasad moved to the Architectural Association to do his diploma and later worked for Edward Cullinan Architects for eight years. He remembers the backdrop of his early career as a highly political time, when the key issue was the context of buildings and why they were being built. He was eager to glean a better understanding of the construction industry.

“While I was at the AA we formed a building company called Unit 7 Building Partnership. We took on a project in Camden where one of us would work in the client office, one in the architect’s office, and one would be on site as a labourer. We each wrote up reports on our experiences and it taught us a lot about construction, although it didn’t develop our design skills.”

“In my experience there has always been an excellent level of cooperation between engineers and architects. It’s only become dicey when contractors have been in charge because they often have a very set view of who does what. There’s nothing more stimulating than the early design stages, when the whole team doesn’t observe professional boundaries, thrashing out opinions and approaches, and I don’t think that’s changed much over the years.”

Despite the overlap of architectural and services design, Prasad doesn’t believe the two will merge completely. “The question of whether or not that’s the future is a valid one, but I believe in the idea of the integrated team assembled for the job in hand. There’s such a diversity of projects out there I don’t think you can make simple rules. I’ve enjoyed working with different engineers and hearing different philosophies. We don’t have to work with the same people; we can be promiscuous in our professional life.”

He thinks the architect is still in a better position to lead the way as “project integrator”. “One of the reasons I moved to architecture is because architects have a holistic view of the world. They can’t be masters of all, but they have a unique ability to conduct this orchestra of people. I’m not saying others can’t, but architects are in the best position to do it.”

However, Prasad is quick to point out the increasingly important role engineers will play in the future. “Sustainability is the concept of our times, there’s no escaping the importance of it, but it is often used incorrectly. Climate change and the imperative to reduce carbon emissions make it inescapable now.”