Labour cost inflation continues to be the prime driver for an overall rise in building costs, but increased material costs are also playing their part. Michael Hubbard of Aecom reports

A composite measure of building costs increased over the last 12 months by 1.4% at Q2 2016. Labour costs are still rising, and materials cost inflation is now also contributing to the overall increase.

The rate of annual change increased to 2.2% at Q2 2016 from 1.1% in the preceding quarter. Labour costs remain the primary driver of inflationary trends in this index.

The electrical cost index increased by 2.2% over the year. Again, the annual change results primarily from labour cost increases, with materials still largely benign though this may change in coming quarters.

Consumer price inflation picked up slightly in Q2 2016, recording 0.4% annual change. Latter months in the quarter were higher than this, reflecting some pressures now thought to be in the system. 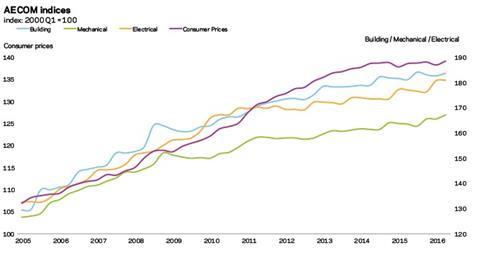 Price Adjustment Formulae indices, compiled by the Building Cost Information Service (previously by the Department for Business Innovation & Skills), are designed for the calculation of increased costs on fluctuating or variation of price contracts. They provide guidance on cost changes in various trades and industry sectors and on the differential movement of work sections in Spon’s price books.

The 60 building work categories recorded an average increase of 2% on a yearly basis.

Higher increases were recorded in the following categories:

The All Work material price index declined by 0.2% in the year to July 2016, although the index increased by 0.3% compared with the previous month. Housing-related materials increased by 0.8% over the last 12 months. Non-housing materials prices fell over the year though, declining by 0.4%. All M&E categories posted small annual increases.

Consumer price inflation rose by 0.6% in July. Some inflationary pressures have been introduced into the system as a result of changes to sterling against its major currency pairs. Consequently, it is now thought that the inflation outlook may be a little higher than the benign outlook previously forecast.

Input prices increased by 4.3% on a yearly basis up to July 2016. This is the first annual increase since September 2013. These recent data points mark a notable rise in input costs, particularly when overall trends have been negative for so long. Some of the rises are attributable to weaker sterling experienced through 2016 as, all other things being equal, lower sterling tends to raise sterling prices of imports. Additionally, as the oil price has stabilised at around $40-50/barrel, its contribution to negative overall input cost trends has waned. Imported food, metals, parts and equipment are all major components of the overall increase.

Factory gate prices increased 0.3% on a yearly basis in July. This is the first annual increase since June 2014. A combination of higher input costs, a stronger labour market and increased confidence among manufacturers to pass on higher prices to consumers all contribute to recent changes. Again, the effect of falling oil prices has much less effect now in sustaining the falling or flat output price trends of recent quarters. The core index, which is narrower because it excludes items such as petroleum and food, increased by 1% in the year to July 2016. With higher input costs, output prices will come under pressure to be increased further still over the near-term. 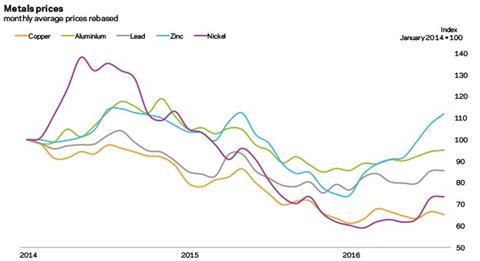 Commodities price trends showed signs of life and reversing the long-established downward trend of the last two years. Apparent efforts to address production over-capacity have provided support to prices, along with some improvement in aggregate demand. Denominator effects also play a part in the yearly change calculation.

Sterling was sold off heavily immediately after the EU referendum outcome, against both the Euro and the US dollar. Although sterling is described as being significantly weaker against the Euro, this is relative to its recent history. A longer-term comparison with the Euro shows sterling back to levels recorded through the period 2009 to 2013. The period prior to the referendum also saw a sustained reversal in sterling’s appreciation up to early 2015. Against the US dollar, sterling is materially weaker, now at a level not seen since the mid-1980s. This is not due entirely to the referendum outcome, instead it also reflects the relative positions of each country’s economic position more broadly.

Following negotiations between the parties to CIJC, the council has agreed a two-year agreement on pay and other conditions. Hourly pay rates will increase by 2.5% from 25 July 2016 and then by a further 2.75% in June 2017. Industry sick pay and subsistence allowance will also increase in line with the basic pay rate increases. Workers will receive an extra day’s holiday from 1 January 2017, which is worth an additional 0.4%.

A two-phase agreement has been agreed between BESA and Unite trade unions. Phase 1 includes 2% and 2.5% increases in the hourly wage rate effective from 3 October 2016 and 2 October 2017 respectively. Phase 2 covers the periods 2018/2019 and 2019/2020 involving increases in index and other benefits agreed in July 2016. 2018 and 2019 hourly wage rate discussions will take place towards the end of 2016. Introduction of calculating daily fare and travel allowances has been changed from kilometres to miles. Workers annual holiday to increase from 23 to 24 days effective from February 2020.

The electrical contracting industry has agreed a four-year wage deal, effective from January 2017. Hourly wage increases of 2% in 2017, 2.5% in 2018, 2.75% in 2019 and 3% in 2020. Introduction of a new mileage allowance and rate to replace travel allowance and travel time also comes into effect. Annual holidays increase to 23 days in 2019 and 24 days in 2020. For more information on the agreement, refer to the Electrical Contractors’ Association and Unite wage agreement document – July 2016.

The Building and Allied Trades Joint Industrial Council (BATJIC) agreed a two-year pay deal effective from 27th June 2016. Workers will receive a 2.5% pay rise this year and a further 2.5% increase in 2017. Lower paid operatives will get a bigger boost of 4% this year, followed by 2.5% next year. The agreement includes a commitment that, if inflation in early 2017 is higher than 2.5%, then the 2017 pay rise will match this up to a limit of 3%.

A 2.5% increase in hourly rates came into effect from 4 January 2016. Employees rates of pay, allowances entitlements and benefits are published in promulgation No. 171 of JIB for Plumbing, Mechanical Engineering Services in England and Wales agreement.

They are intended to provide an underlying indication of price changes and differential movements in the various work sectors but do not reflect changes in market conditions affecting profit and overheads provisions, site wage rates, bonuses or materials’ price discounts/premiums. Market conditions and commentary are outlined in Aecom’s quarterly Market Forecast (last published August 2016).