Our quarterly analysis of the main construction cost indices shows material and labour price continuing to rise, but global economic uncertainty may affect the numbers in future. David Holmes of Aecom reports

A composite measure of building costs increased by 4.9% over the previous 12 months. Materials costs remained a significant driver of cost inflation to the overall index, likely driven by the fall in sterling against the euro and the dollar, which introduced inflationary pressures from the subsequent higher cost of imported materials and components, particularly with dollar-priced commodities. Labour costs also continued to rise steadily over the second quarter as contractors report difficulty in recruiting skilled labour, particularly carpenters and bricklayers.

Aecom’s mechanical cost index shows the rate of annual change slowed to 4.4% in the second quarter of 2018. Labour and materials maintained steady increases, but some inflationary pressures appear to be easing.

Aecom’s electrical cost index increased by 2.7% over the year. This marks an increase in the rate of change, likely stemming from a significant pick-up in global metals commodity prices experienced through the first half of 2018. 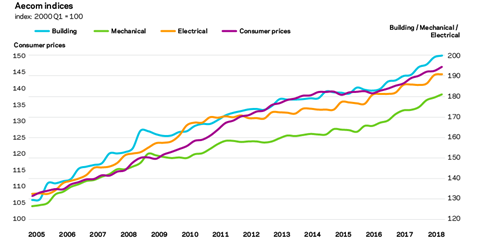 Price adjustment formulae indices, compiled by the Building Cost Information Service, are designed for the calculation of increased costs on fluctuating or variation of price contracts. They provide guidance on cost changes in various trades and industry sectors – those including labour, plant and materials – and on differential movement of work sections in Spon’s price books. The 60 building work categories recorded an average rise of 4.1% on a yearly basis. The six highest rises were recorded in:

The other changes were as follows (only one category recorded a decline and one no change):

The BEIS all-work materials price index increased by 6% in the 12 months to June 2018. Housing-related materials increased by 5.2% over the same period. Non-housing prices rose by 6.1% annually. All M&E categories continue to post significant yearly increases.

Consumer price inflation including owner occupiers’ housing costs was 2.3% in the 12 months to June 2018. This marks a further slowing in the rate of change, reflecting the reducing effect of the past fall in sterling and all-round competitive pressures. Energy, utility and fuel prices have all been increasing recently.

Input costs increased by 10.3% on a yearly basis up to June 2018. This reflects a pick up in the rate of change after a slower period of input cost increases over the first quarter of 2018. The largest upward contributions came from refined petroleum products oil and metals, both of which tend to be imported and are therefore subject to the changes sterling exchange rates. Construction materials had quite significant increases.

Factory gate prices increased by 3.1% on a yearly basis to June. The largest upward contribution from non-food items was from petroleum products. This 12-month rate of change has been positive since July 2016 and is below the corresponding trend for input costs.

Construction remains little changed on a year ago with caution around the short-term outlook. The level of activity bounced back from the effects of adverse weather in the first quarter, but has not been fully made up partly owing to continuing capacity constraints. Housebuilding remains the strongest part of the sector. 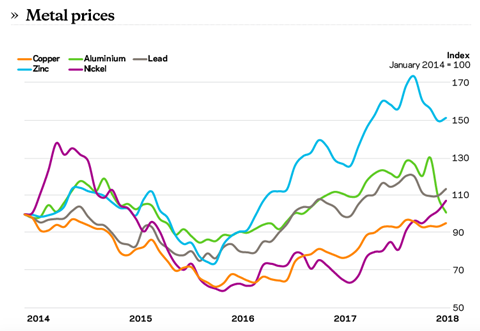 Aluminium prices have fallen with the uncertainty surrounding the market and trade sanctions and increased inventory levels, but the price remains volatile. Other commodities continue their upward trend although the pace of change slowed as ongoing uncertainty around global economic activity.

Further movements in price trends will play out through 2018, as the impact of the tariffs and retaliatory measures begin to influence overall levels of global economic activity, along with any supply responses around domestic metals production and possible results of trade sanctions. 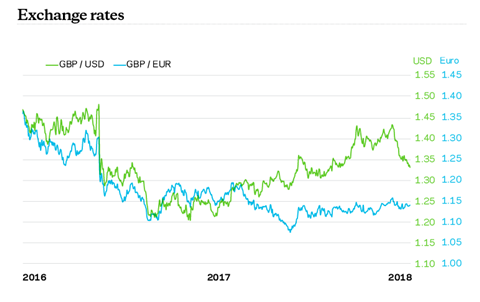 Sterling lost significant ground against the US dollar recently. Stronger economic growth and a higher probability of bank rate increases in the US make its currency a preferable FX holding to sterling. Persistent uncertainty remains for the UK, as the chance of a no-deal Brexit appears to be growing. Against the euro, sterling has made little or no progress in moving away from its prevailing level after the European Central Bank said it would keep interest rates at zero until “at least next summer”.

They are intended to provide an underlying indication of price changes and differential movements in the various work sectors but do not reflect changes in market conditions affecting profit and overheads provisions, site wage rates, bonuses or materials’ price discounts/premiums. Market conditions and commentary are outlined in Aecom’s quarterly market forecast (last published August 2018).