Construction jobs and activity continue to tumble but orders are at their highest reading since June 2011, according to latest figures from Experian Economics

The construction activity index decreased by 10 points to 46 in December, taking it into negative territory and to its lowest level since June 2012. The seasonally adjusted indices for civil engineering and residential activity both edged up, by five points and one point respectively. However, the non-residential one dropped to 47, below the 50 no-change mark for the first time since July last year.

The orders index rose by one point to 50, indicating that orders were normal for the time of the year. This is the highest reading posted since June 2011. Both the non-residential (59) and civil engineering (49) sectors saw their orders indices fall by four points. However, whereas the former index remained in positive territory, the latter one moved below the no-change mark of 50. The residential sector saw its orders index go up by eight points to 49.

The percentage of respondents reporting no constraint on activity (20%) decreased for the second month running. Bad weather and finance as a limitation became more important at 9% and 17% respectively. Furthermore, other factors holding up business activity rose to 5% - a level not seen since June 2011. The proportion of firms reporting that insufficient demand was restricting their activity levels declined to 46%, while labour shortages became less of a concern as 2% of businesses reported this as an issue.

The employment index saw a small rise of one point to 42. The index has been below the no-change mark of 50 since December 2007.

According to the Office for National Statistics, the number of workforce jobs in the construction industry declined for a fifth successive quarter in Q3 2012, falling to just under two million. This is the lowest level since Q2 2001. 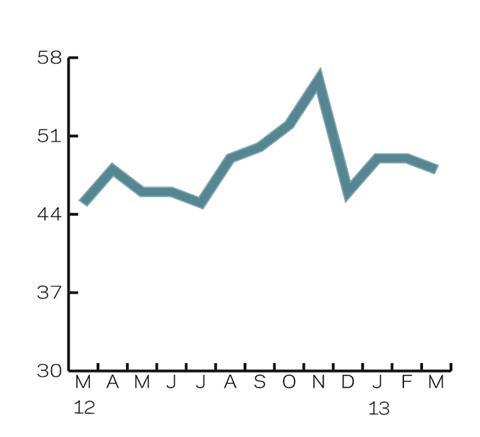 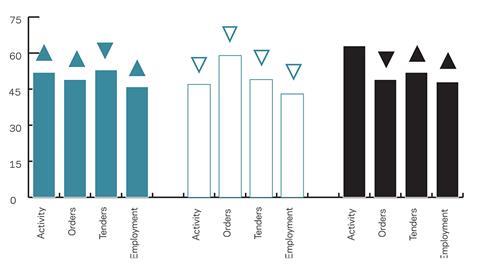 In December 2012, the majority of firms across all three sectors reported having less than three months of work-in-hand, with only 17% of civil engineering respondents having three months or more. Twenty-eight per cent of firms in the non-residential sector reported work-in-hand of between three and six months, up from 19% three months earlier.

Fifteen per cent of respondents in the residential sector reported having more than six months work-in-hand, better than both the non-residential (9%) and civil engineering (7%) sectors. 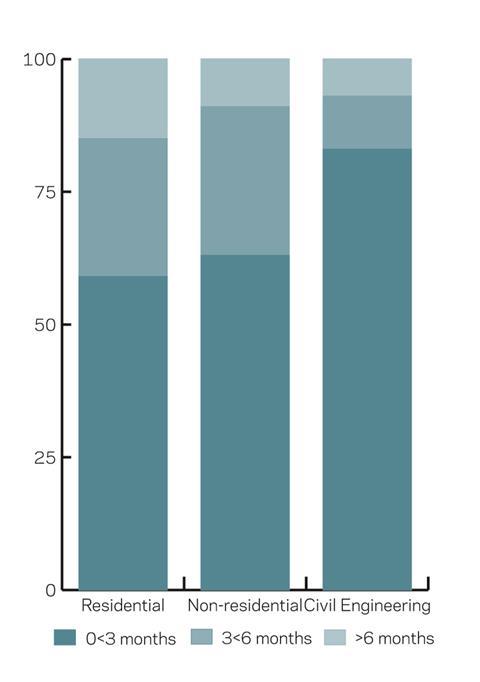 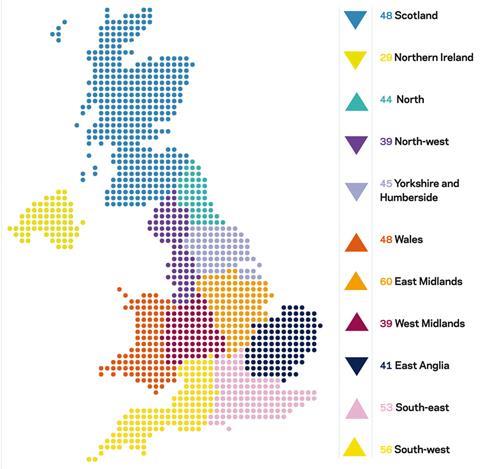 In December five of the 11 regions in the UK saw a decline in their index. Yorkshire and Humberside experienced the largest decrease as its index dropped sharply by 20 points to 45, taking it below the no-change mark of 50 for the first time since July of last year.

Northern Ireland saw its index go down by four points to 29 - the lowest level since January 2009. Both East Anglia’s (41) and Scotland’s (48) indices fell by two points while the North-west experienced the smallest decrease of one point to 39.

The North saw the greatest increase in its index, as it improved by six points to 44. The East Midlands, South-west and Wales all saw their indices go up by three points to 60, 56 and 48 respectively. The East Midlands has not seen this level of reading since April 2008.

The South-east index rose by two points to 53 while the West Midlands index edged up by one point to 39.

The UK index, which includes firms working in five or more regions, saw a decrease of eight points to 48 - taking it into negative territory for the first time since August 2012.