Construction activity showed a slight fall in the third month of the year but remained in positive territory, pointing towards a period of sustained expansion. Experian Economics reports

The construction activity index continues to support the conventional wisdom of a period of sustained demand-led growth in the industry, as it rose to 61 points, for the second time in three months. The index has managed to stay above the no-change mark in each month since August 2012. Both the residential and non-residential sectors were up, by five points to 62 and four points to 61 respectively. On the contrary, civil engineering fell five points to 50, its lowest level since May last year.

In April the orders index dropped three points to reach 62, although it stayed 10 points above its value for the previous year. In fact, it has remained in positive territory 13 successive months, buoying reports of sustained demand within certain facets of the construction industry.

The percentage of respondents indicating that they were experiencing no constraints on activity decreased marginally to 34% in April. Meanwhile, the proportion indicating that bad weather was impeding activity remained elevated, now totalling 7%. Those who indicated insufficient demand restricted activity increased to 40%. Labour shortages continued to be of minimal concern, as only 5% felt it was a significant factor. Material/equipment shortages became more of a worry as 4% of respondents felt it was affecting their activity levels, up from 1% in the previous month. The proportion indicating that financial concerns were a significant factor decreased to 10%, the lowest level for nearly four years.

The employment prospects index was up on a month-by-month basis, with a two point increase to reach 50. The index has been approaching the 50-and-above mark fairly frequently within the last eight months, in stark contrast to the persistent weakness observed from mid-2008 onwards.
The tender prices index rose by three points in April to reach 64. Indicating that firms are expecting the prices they charge to increase over the coming three months.

CFR’s Leading Construction Indicator is set to fall in May, albeit marginally. We anticipate continued positivity over the coming months, at a slightly slower clip, as the prolonged bull-period begins to taper down somewhat. 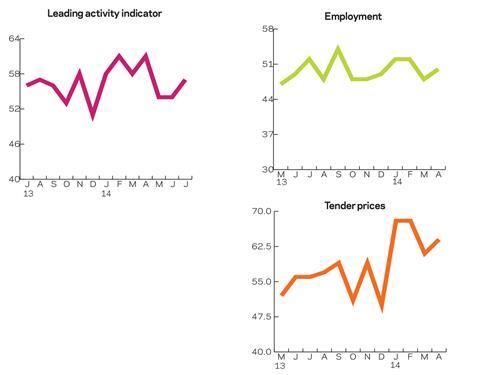 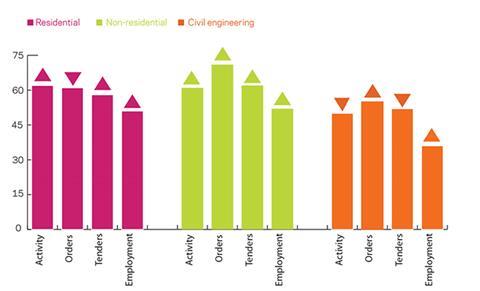 The percentage of building firms reporting falling labour costs decreased to 2%. Approximately 32% of respondents indicated that they had experienced 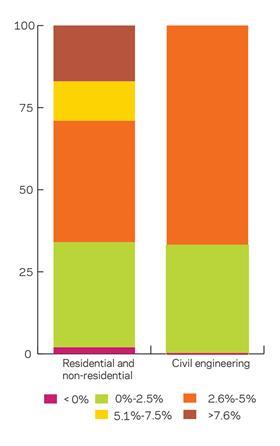 annual labour cost inflation of less than 2.5%, up 21% from three months ago. The percentage of respondents indicating costs had risen between 2.6% and 5% decreased to 37%, down 30% from three months ago. Meanwhile, the percentage of respondents indicating that their wage bill had risen by between 5.1% and 7.5% increased to 12%, while the share of firms reporting labour cost inflation over 7.5% increased from 0% to 17%.

In April, six of the 11 regions and devolved nations saw their indices improve. The East Midlands saw the largest increase with a six point upswing to 69. The South-east experienced a three point uptick to take its index to 62. Despite Scotland’s index climbing four points, it remains in negative territory for the fifth consecutive month. Both the West Midlands and North-west saw their indices rise by two points to reach 53 and 54 respectively. While South-west’s index advanced further, growing by one point to reach 74; the highest index on record for the region.

East Anglia experienced the largest downturn of five points, although it remained in positive territory at 58, while the North-east posted a decline of four points to 59. Despite Yorkshire and Humberside recording a two point fall in its index, it remains in a strong position (78). Falls were also seen in Wales and Northern Ireland, as their indices both fell by one point to reach 35 and 47 respectively.

The whole UK index, which includes firms in five or more regions, saw its index decline two points to 61.