The construction activity index takes a hit for the second month running, with all three sectors - residential, non-residential and civil engineering - experiencing contractions

The construction activity index stood at 54 points in September, down three points on the previous month’s level. All three sectors experienced contractions to their corresponding indices last month. Residential and non-residential both edged downwards to 59 and 51 points respectively, while civil engineering experienced a heavy double-digit contraction to reach 36 points. This was its lowest level since February of 2012.

The orders index fell five points in September to 64 points. It has now posted above average orders for its eighth consecutive month. Tender enquiries were also down, dropping one point to reach 65 points on the same measures.

The percentage of respondents posting no constraints fell to 26% last month, indicating an overall increase in the amount of reported factors which could adversely affect activity. Of these factors insufficient demand rose six percentage points to reach 37%, while bad weather also became more of an issue, although at 3% it remains a minor one. The proportion of respondents indicating that labour shortages were restricting productivity rose to 15% in August. Material/equipment shortages are slowly becoming more of a factor with 6% of respondents reporting them as an issue, which was its highest reported percentage to date. Meanwhile, financial constraints were unchanged in September at 12%.

The employment prospects index stood at 54 points in September, down six points on the previous month’s level. Despite this fall the index has remained above 50 for its sixth consecutive month, suggesting that employment is still firmly in expansion territory.

Tender prices declined by one point in September to reach 65 points. The series has now remained above the 60 mark for its ninth consecutive month. 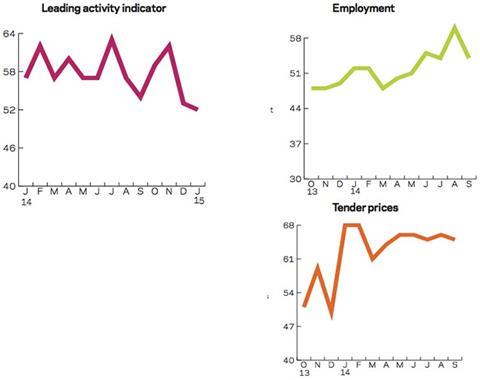 CFR’s Leading Construction Activity Indicator1 dropped to 54 in September, down three points month-on-month. Despite this fall the index posted above average activity for its 20th successive month. 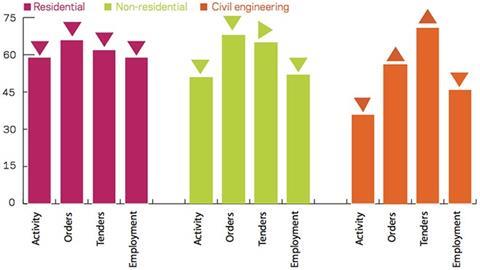 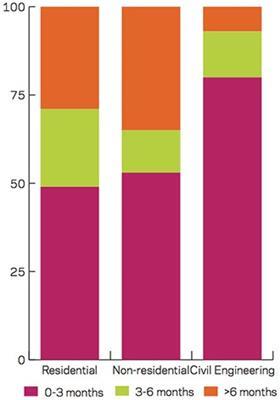 The majority of regions and devolved nations saw an increase in activity in September. The largest upswing was seen in the South-west’s index, which climbed 12 points on a monthly basis to reach a high of 81 points. Noticeable upticks were also seen in Wales and the East Midlands. Both were up eight points on the same measures to 53 and 74 respectively. Wales’ index rose above the 50 mark for the first time since March 2013. The North-west (57) and the West Midlands (59) saw an increase to their indices by one and two points respectively. Activity in the South-east strengthened further in September, reaching 63 points. It has now remained above the 60-point mark for the six successive months.

Northern Ireland’s index fell two points to 57 last month. The largest declines were in Scotland and the North-east as each of their indices saw a four point fall in activity, although both remained firmly in expansion territory. Moderate reductions were also seen in Yorkshire & Humberside and East Anglia.

The UK index, which includes firms working in five or more regions rose three points to 61. 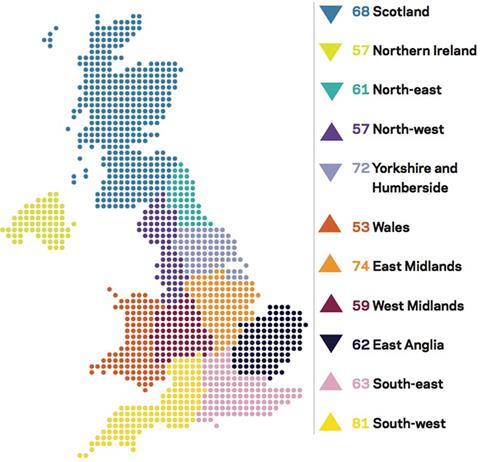