Construction activity continued to increase in February and was up four points on the previous month. This represents 18 months of sustained positivity. Experian Economics reports

Experian’s construction activity index increased by four points to 62 in February, indicating a further upturn in activity, it is worth noting that the index has now stayed above the 50 mark for the 18th successive month, suggesting sustained positivity for new construction work.

The civil engineering sector saw the greatest increase as the index rose by six points to 68, staying in positive territory for the third straight month. The residential and non-residential sectors also increased, with the former up one point to 57 and the latter rising 5 points to 63.

The orders index saw an uptick of two points to 61 in February, the fourth instance where orders rose above 60 since January 2013. However tender enquiries dropped to 58, with a 12-point decline, this was expected given the historic high (70) in the previous month.

The proportion of respondents indicating that insufficient demand was restricting productivity increased slightly to 39%. Those indicating that they were experiencing no constraints on activity rose to 24% in February, while those which felt bad weather was a factor decreased significantly from 24% to 7.

Labour and material/equipment shortages remain of little worry, as only 7% and 3% of respondents respectively indicated these were a concern. However, financial constraints became more of an issue with 17% of respondents indicating their liquidity was depressing activity.

Following a steep increasing in January, the tender prices index remained unchanged at 68, as firms expect the prices they charge to increase over the coming three months. 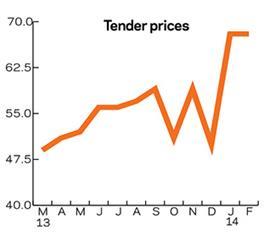 CFR’s Leading Construction Indicator is expected to fall in March, before activity picks up at a faster rate in April. 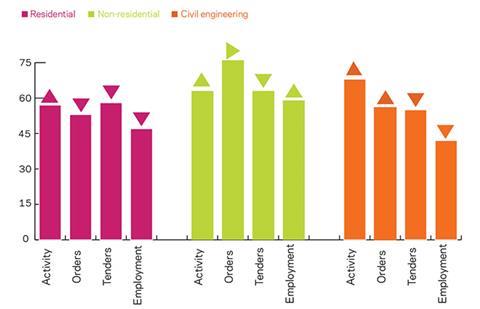 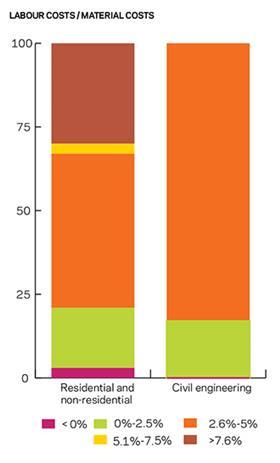 In February, 3% of residential and non-residential firms reported that material costs had declined on an annual basis, down from 6% in November.

The percentage of building firms indicating material cost inflation between 0% and 2.5% rose to 18%. The majority of respondents indicated that annual material costs have risen by between 2.6% and 5%, up from 42% three
months ago.

The percentage of building firms indicating material cost inflation of over 7.5% remained at 30%. 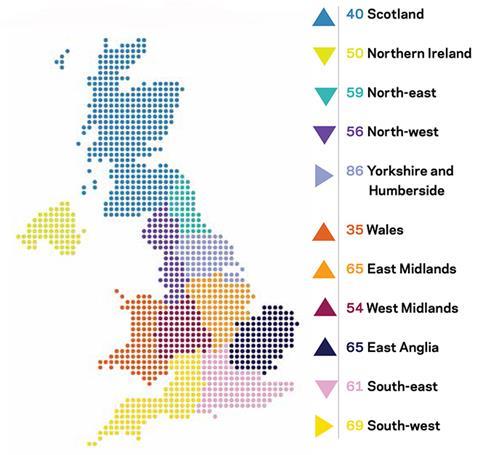 Five out of 11 regions and devolved nations had an increase in their indices. The East Midlands and East Anglia increased five points to their respective indices, taking both to 65.

Wales also experienced a moderate uptick to its index, increasing by four points to 35. However the index remains below the no change mark of 50, pointing towards a decrease in overall construction activity and outlook for the devolved nation.

The indices in the West Midlands and Scotland also rose, the former increasing by two points to 54 and the latter by one point to 40.

The sharpest downturn was seen in the North-west, with a two-point decline, taking the index to 56. The North-east and the South-east saw their indices drop one point to 59 and 61 respectively. Meanwhile Northern Ireland’s index fell by one point to 50.

In February the UK index, which includes firms working in five or more regions, climbed seven points to reach 61.