Despite dipping below its three-month average, construction activity numbers remained positive in May with strong output and orders figures for most sectors. Experian Economics reports

The construction activity in index remained in positive territory in May, albeit slightly below its three-month average. Nevertheless, at 57 points the series remains significantly above its nadir for the last 12 months (50). The index seems to be following expectations, with strong output and orders figures for most of the new work sectors within the construction industry, coupled with less severe public sector declines.

Breaking down activity by sector, only civil engineering managed any growth on a monthly basis, swinging up 13 points to 64, while the residential and non-residential ones fell. All three remain above 50.

The orders index saw an uptick of one point to 63 in May, the fourth successive month where the orders index remained above 60, and the 14th straight period of bullish orders sentiment. Tender enquiries were also positive, reaching 60 points for the first time since January.

The employment prospects index remained at the no-change mark of 50 in May, suggesting a flattening out of expectations over the coming three months.

The tender prices index rose by two points in May to reach 66. Indicating that firms are expecting the prices they charge to increase over the next three months. 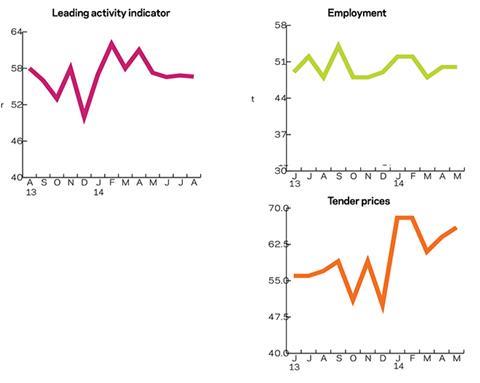 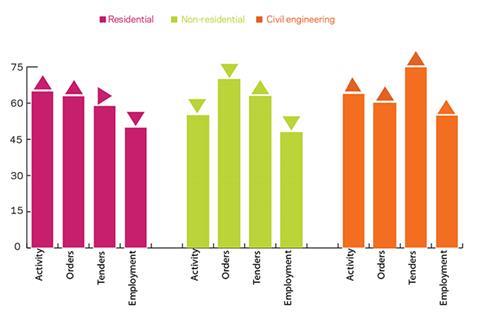 CFR’s Leading Construction Activity Indicator1 dropped four points last month, reaching 57, its lowest level since January. The indicator is forecast to remain close to the 57-mark for the next three months, signalling a period of potentially low volatility for construction expectations. 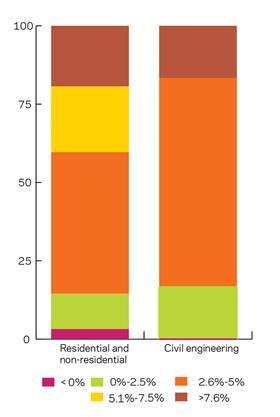 Seven out of 11 regions and devolved nations saw a decrease in their indices. The largest downturn was experienced by Yorkshire and the Humber which saw its index plummet by 17 points to reach 61, despite this the region remains firmly in positive territory.

Wales and the East Midlands also saw moderate declines to their indices, both decreasing by five points to 30 and 64 respectively. This decline for Wales brought its index to the lowest level since the survey began. East Anglia saw its index decline by four points to 54 while Northern Ireland’s index fell by three points to 44. Despite declines seen by the North-east and West Midlands, both indices remain in positive territory at 57 and 52 respectively. Meanwhile the South-east’s index flattened out at 62, on monthly basis.

The largest uptick was experienced by the South-west, as its index rose four points to 78. Scotland and the North-west both saw their indices rise by two points, the former reaching 48 and the latter 56.

In May the UK index, which includes firms working in five or more regions, dropped three points to 58. 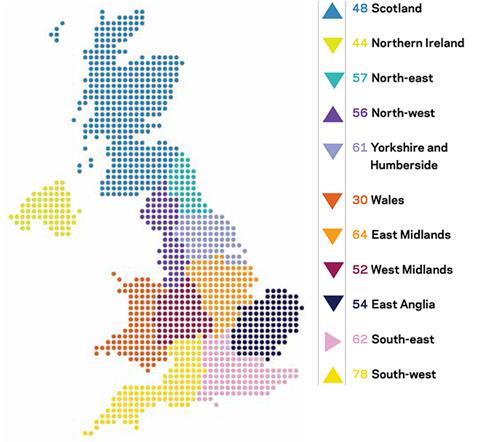 This an extract from the monthly Focus survey of construction activity undertaken by Experian Economics on behalf of the European commission as part of its suite of harmonised EU business surveys.
The full survey results and further information on Experian Economics’ forecasts and services can be obtained by calling 0207-746 8217 or logging on to www.experian.co.uk/economics
The survey is conducted monthly among 800 firms throughout the UK and the analysis is broken down by size of firm, sector of the industry and region. The results are weighted to reflect the size of respondents. As well as the results published in this extract, all of the monthly topics are available by sector, region and size of firm. In addition, quarterly questions seek information on materials costs, labour costs and work-in-hand.