Construction activity showed a slight fall in the third month of the year but remained in positive territory, pointing towards a period of sustained expansion. Experian Economics reports

After growing at a respectable clip for two consecutive months, Experian’s construction activity index fell four points to 58 in March. Despite this, the index remained in positive territory for 19th successive month, pointing towards a period of sustained expansion. At the sector level, activity declined across the board, with civil engineering experiencing the largest fall of 11 points to 56, non-residential activity followed with a six-point decline to 57, while the residential index edged down one point to 56.

The orders index saw an uptick in March, rising four points to 65, its highest value since October of last year. Conversely, tender enquiries fell one point to 56. However, this fall could be interpreted as a correction from the unusually high level reached at the beginning of the year.

The employment prospects index was down on a month-by-month basis, with a four-point reduction to 48. Indicating that businesses expect employment levels to fall over the next three months.

Tender prices remained above the 60 mark for the third consecutive month in March, although the series was down seven points month-on-month. 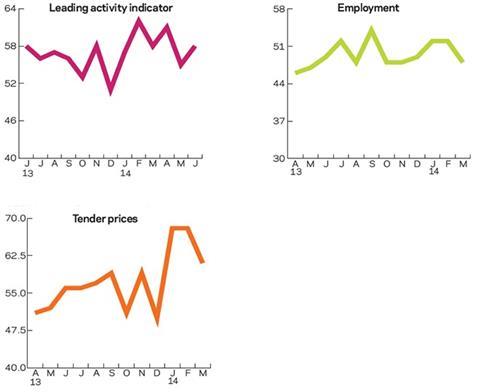 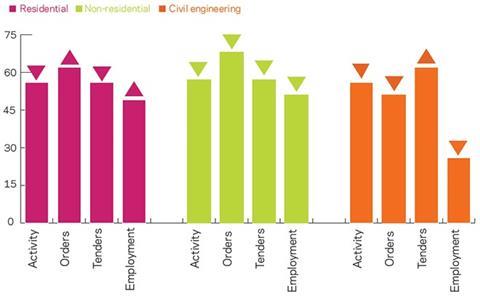 CFR’s Leading Construction Indicator is expected to rise in April, before activity falls in the following month. 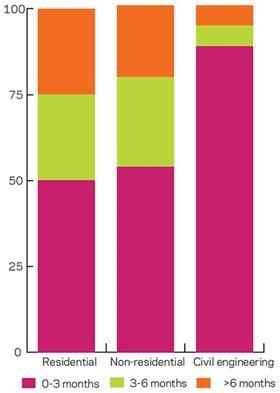 During March, around 50% of residential respondents reported less than three months’ work in hand while for non-residential and civil engineering firms this was 54% and 89% respectively. The non-residential sector saw the highest proportion of respondents (26%) reporting that they had enough work to keep them active for between three and six months.

Four out of 11 regions and devolved nations saw an increase in their indices. The North-east and South-west both saw an increase of four points to their respective indices, taking the former to 63, and the latter to 73.

Scotland and Wales both saw a moderate gains, the former was up two points to 42, and latter ticked up one point to 36. Despite this, both indices remained significantly below the no-change mark, with Wales sitting firmly in negative territory for the 12th straight month.

Yorkshire and Humberside saw the sharpest contraction in March, falling six points on a monthly basis to 80, although the figure is 27 points above its value for the same period of 2013. The region’s index has been particularly strong over the last 12 months, ranging from a low of 60 in September, to a high of 103 in December. The West Midlands and North-west were also down, as the former fell three points to 51, and the latter four points to 52. Northern Ireland, East Midlands, East Anglia and the South-east all saw moderate declines.

In March the UK index, which includes firms working in five or more regions rose two points to reach 63, its highest level since February 2008. 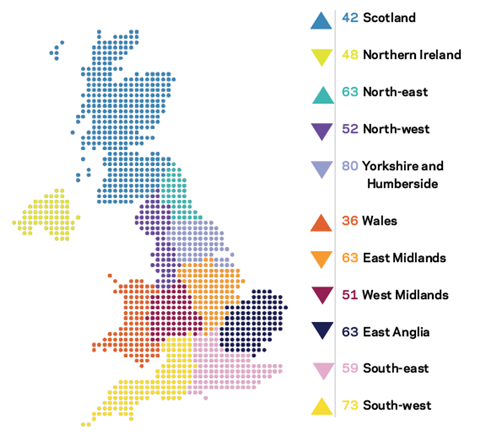