The total activity index for February remained in positive territory, gaining two points on January to reach 54. However, it is still down on August, when it stood at 60 points. Repair and maintenance activity, which has been losing momentum since September, lost three points and fell below the no-growth line to 49 points.

Both orders and tender enquiries indices have moved little in the past five months and remained stable in February. Orders remained flat relative to January, at 67 points, while tender enquiries ticked up by a point to 58.

Orders in the residential and non-residential sectors had a slight recovery from their recent slowdown – ticking back up by a point or two to 67 and 76 respectively – but civil engineering saw a serious deterioration, with the index falling 20 points to 40, its lowest figure since January 2012.

The tender enquiries indices suggested growth in all sectors, though only one gained points since the previous month. The residential index dropped four points to stand at 55, while civil engineering saw a five-point drop to the same level. Non-residential rose in February to hit a five-month high of 61, the same as in September.

Tender prices remained expansionary, with February the 19th month of a tender price index above 60. It gained two points over January’s figure, and posted an eight-month high of 69.

Employment prospects continued to expand despite the down-tick in its index by a point to 52. The general dynamics in the last half-year, however, suggest a gradual slowdown – the index has been losing points since September 2017.

The activity index for February continued to suggest positive developments in contractors’ workloads, standing at 54 points, but has been decelerating gradually since August 2017. The leading activity indicator gained two points over January’s figure to 54 and is expected to change little over the coming months. 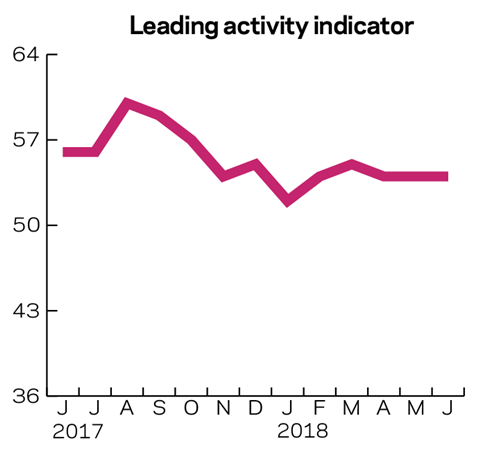 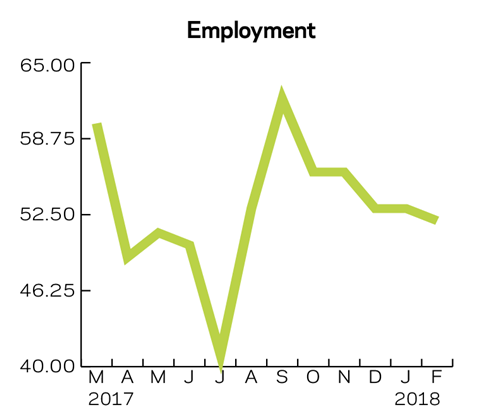 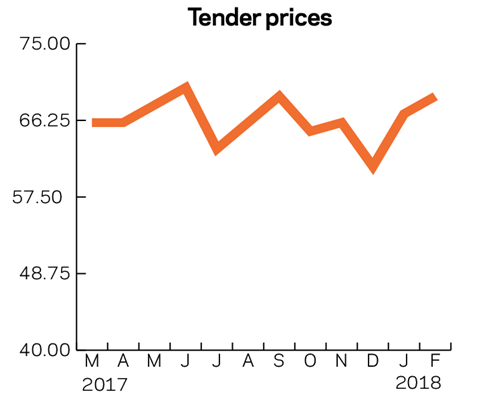 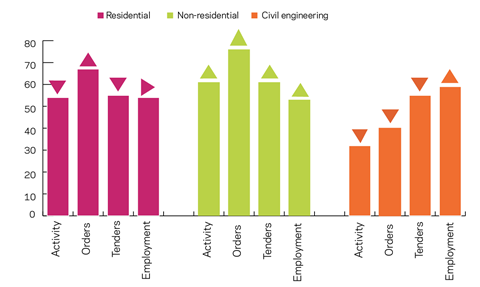 There has been a slight shift in the range of materials price changes. Just over a half of respondents (53%) in the residential and non-residential sectors have experienced an increase in materials costs of up to 5% (compared with 42% reporting an increase back in November), while the share of those who reported changes exceeding 5% has shrunk by 14 percentage points to 42% of the respondents. The share of builders that have reported a decrease in materials costs also saw an increase – from 2% in November to 5% in February.

The situation in the civils sector differed somewhat, with the share of respondents reporting materials cost increases of more than 7.5% doubling to 50%, relative to November. The other half of respondents reported either a decrease in the costs of materials (25% of the responses, compared with none in November), or a change within the bounds of 2.6% and 5% (25% of the responses, compared with 50% of responses in November). 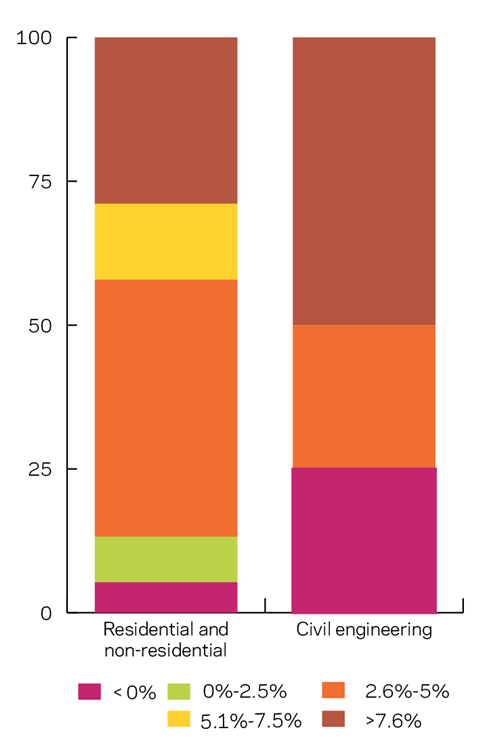 Results across regions varied noticeably during February. Those that were in the negative in January remained there and were joined by the North-west, which tipped the overall UK composite index just below the no-growth bound, at 49.

Yorkshire and Humberside and the North-east remained the leaders, with indices of 66 and 64 respectively, despite the seven-point drop in the former over the past month. The East Midlands managed to catch up with them, as its index gained six points to 62. The region shared third position with Wales, which gained seven points, closely followed by the South-west with a four-point increase to 61.

The North-west’s index dropped just below the no-growth point, as it lost seven points over February and stood at 49. The South-east gained eight, but remained in negative territory with an index of 48.

The West Midlands marked its ninth month of non-positive development and its seventh of holding last place, as it lost three more points to stand at 29, the region’s lowest ever figure. The East of England came second-to-last for the third consecutive month, with no change in its index (at 41 points). 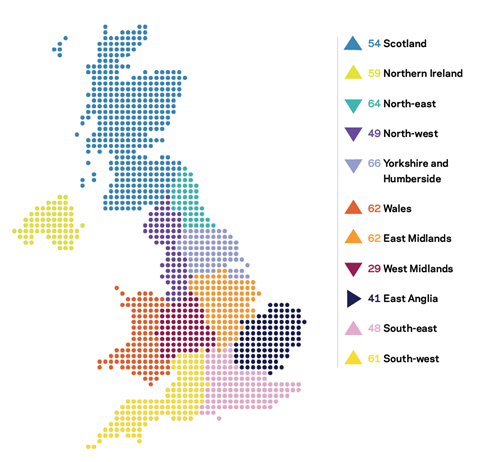