While concern about constraints has edged up, the orders index has hit a record high and things are looking up for nearly every region

The construction activity index stood at 63 points in March, representing a three-point month-on-month increase. In contrast, repair and maintenance activity edged downwards by one point to 55 on the same measures. Both the residential (64) and civil engineering (66) sectors experienced growth in March, with rises of four and one points respectively. Conversely, non-residential fell by three points to 58.

In March, the orders index reached a record high, after climbing 11 points month-on-month to 77. The index has now remained above 60 for 14 consecutive months. On the same measure, tender enquiries were unchanged at 64 points.

On the whole, opinions regarding restraints to construction activity in March rose in relation to the previous month’s consensus. The percentage of respondents posting no constraints fell by one percentage point to 34% in March, indicating a slight increase in factors which could adversely affect activity among the panel of construction firms. Worries regarding demand in the construction industry remain prominent, with 34% of respondents stating that it was an issue. Adverse weather conditions have become less of a concern, given the recent spate of settled weather.

Meanwhile, labour shortages have intensified, with 19% highlighting this as an issue, though material and equipment has not been in short supply. Despite financial constraints remaining a consistent concern among industry professionals, the percentage of respondents reporting them as an issue fell to 8% in March, the lowest level since November 2010.

The employment prospects index returned to positive territory again in March, with a 12-point increase to 59. This suggests that employers within the construction industry will look to expand their current workforce in the coming three months. 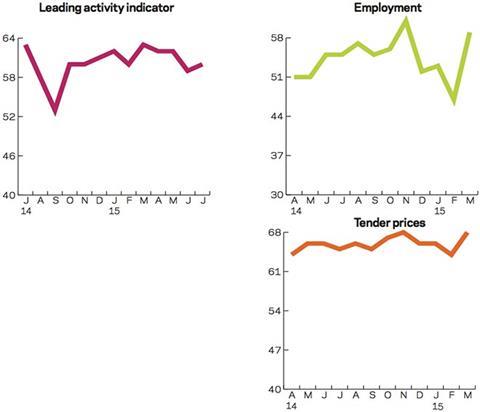 In March, the CFR’s Leading Construction Activity Indicator gained three points on a monthly basis to reach 63. It has remained at or above 50 in each month since September 2012. 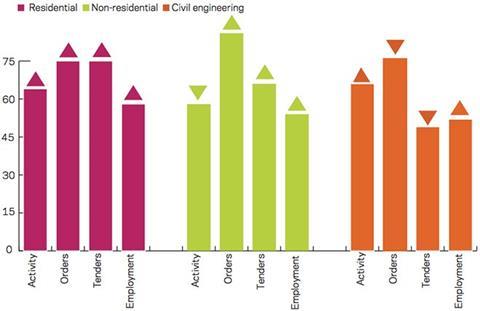 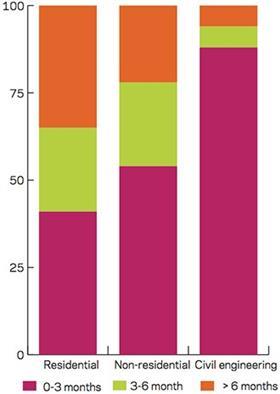 The majority of regions and devolved nations saw an increase in activity in March. The North-west posted the strongest increase, rising by 10 points to 58, thereby re-entering positive territory. Other robust movements came from the North-east (58) and the East Midlands (79), both posting increases of eight points to their indices. The South-west remained strong in March, with its index holding steady at 79 points. The West Midlands’ index also held steady, albeit in negative territory at 46 points. East Anglia’s construction activity rose by just three points to 63. Wales (58) and the South-east (58) rose by two points and one point respectively. Yorkshire and Humberside continued to exhibit further positivity, as activity rose by five points to 83. Scotland’s (54) index increased by five points, taking it out of negative territory. With an uptick of three points, Northern Ireland’s positive performance carried on in March.

The UK index, which includes firms working in five or more regions, rose to 62 points in March. 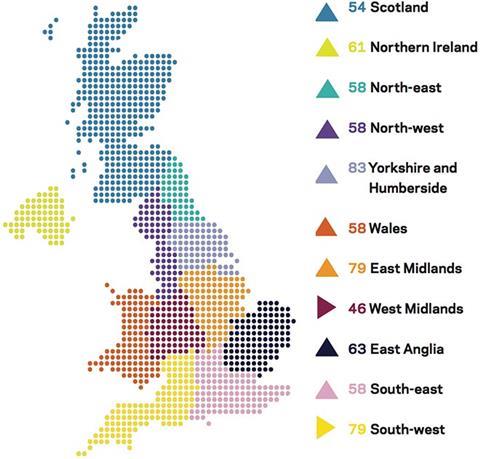 1. CFR’s Leading Construction Activity Indicator incorporates a range of factors to assess the construction industry’s prospects over the next quarter. The indicator is put together using information about past levels of activity, orders and tender enquiries.