With the non-residential and civil engineering sectors bouncing back, the construction activity index made a seven-point month-on-month jump to 60 points

The construction activity index stood at 60 points in October, representing a month-on-month increase of seven points. The non-residential and civil engineering sectors bounced back last month after contracting in September. They rose by five and 19 points respectively to reach 57 and 55. The residential sector, on the other hand, remained unchanged month-on-month at 60 points.

The orders index gained one point in October to reach 65. It has now posted above average orders for its 19th consecutive month. Tender enquiries also increased by one point to reach 66 in October.

On the whole, opinions regarding construction activity constraints in October remained fairly similar to the previous month’s consensus. The percentage of respondents posting no constraints fell by one percentage point to 25% last month. This indicated an overall increase in factors which could adversely affect activity among the panel of construction firms. Of these factors, insufficient demand rose one percentage point to reach 38%, while bad weather also became more of an issue - although at 4% it remains a minor one. Those indicating that labour shortages were restricting productivity fell to 14% in October. Material / equipment shortages remained unchanged at 6% for the second consecutive month. Meanwhile, financial constraints were also unchanged in October (12%).

The employment prospects index stood at 56 points in October, up two points on the previous month’s level. The index has now remained above 50 for its seventh consecutive month, suggesting that firms are set to remain bullish on hiring for at least the short term.

Tender prices gained two points in October to reach 67 points. The series has now remained above 60 for 10 consecutive months. This suggests we are in the midst of a sustained and robust expansion in tender pricing. 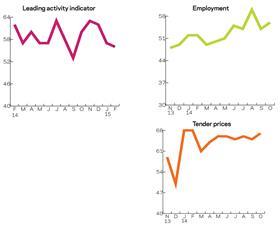 CFR’s Leading Construction Activity Indicator1 rose to 60 in October, up seven points month-on-month. The index has now been at 50 or above for 26 successive months. 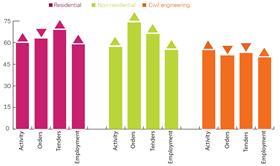 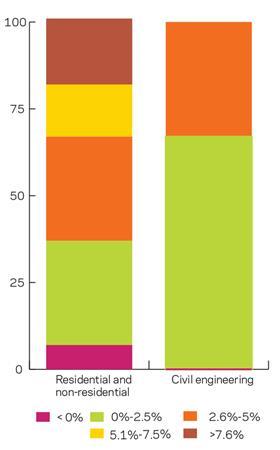 During October 2014, 29.6% of non-residential and residential respondents reported labour cost inflation in the range of 0% and 2.5%. This was the same case for labour cost inflation in the region of 2.6% and 5%, down from a significant 49% of respondents that indicated this level of inflation three months earlier. The percentage of those reporting no inflation rose on a quarterly basis to 7.4%. About 15% of respondents indicated that their wage bill had risen by between 5.1% and 7.5% from their level three months earlier. The share of firms who experienced labour cost growth of more than 7.6% fell slightly to 18.5%.

Experian’s regional composite indices incorporate current activity levels, the state of order books and the number of tender enquiries received by contractors, to provide a measure of the relative strength of each regional industry.

The majority of regions and devolved nations saw a decrease in activity in October. The largest fall was experienced by the North-east, declining by 10 points to 51. Yorkshire and Humberside’s index posted the largest rise, climbing eight points to reach 80. Upticks were also seen in the North-west and Wales, where both indices saw an increase of four points to reach 61 and 57 respectively. Despite Scotland’s index falling by two points in October; it has again remained firmly in positive territory at 66. Wales’ index (57) extended its positive performance, standing above 50 for the second consecutive month. The East Midlands (73) and East Anglia (60) however, saw a reduction to their indices by one and two points respectively. The second largest decline was seen in the West Midlands, where activity fell by four points to 55. This followed seven consecutive monthly increases. Moderate reductions were also seen in the South-east (60) and South-west (80), whose indices dropped by three points and one point respectively. Northern Ireland was the only region that remained flat in October, standing at 57 points.

The UK index, which includes firms working in five or more regions, saw an increase of one point to 62. 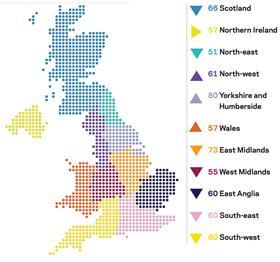