The gloomy forecast in the Tracker is in stark contrast to a surprisingly buoyant second quarter. Now, the good news, from Experian Marketing Information Services

There was an astonishing 9.6% increase, quarter-on-quarter, in construction output during the second quarter of the year, according to the latest official data from the Office for National Statistics.

Growth was recorded across all sectors except the public housing repair and maintenance sector, which posted a marginal decline (0.3%). New work output rose by almost 11%, with R&M output increasing at a slightly more moderate pace of 7%.

The Kickstart housing delivery programme, which benefits both the public and private housing sectors, is well under way. Work on schemes funded under the first round of allocations is due to be completed by spring 2011.

The public non-residential sector continued to perform well in the second quarter of the year with output rising for a 12th successive quarter. Output rose by 12% as work continued on a large number of Building Schools for the Future projects.

There was good news for the industrial sector where output rose for only the second time in two years - and it was double-digit growth of 11%. The commercial sector, which has been one of the worst hit by the recession, recorded a second consecutive quarter of output growth. There is evidence of returning demand for office space and a number of mothballed projects are coming back on line.

On the repair and maintenance side, the private housing sector was particularly buoyant with R&M output rising by 14%. Consumer sentiment improved during the first half of the year, boosted by favourable economic data, and the possibility of change with the general election may have led to higher spending.

The unexpected strength of output growth in the first half of the year is unlikely to continue during the rest of 2010, and the pace of increase is expected to moderate. New orders fell by 14%, quarter-on-quarter, during the three months to June.

Anecdotal evidence suggests pessimism is returning. The autumn spending review will shed light on further areas of the industry at risk from spending cuts, following the decision to scrap those schools under the BSF programme that had not reached financial close. 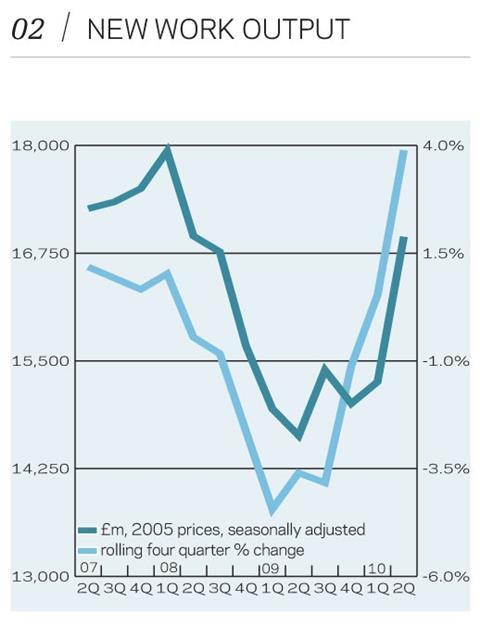 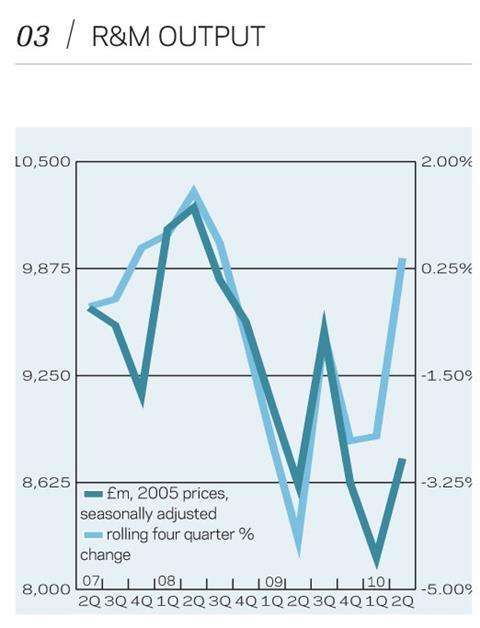 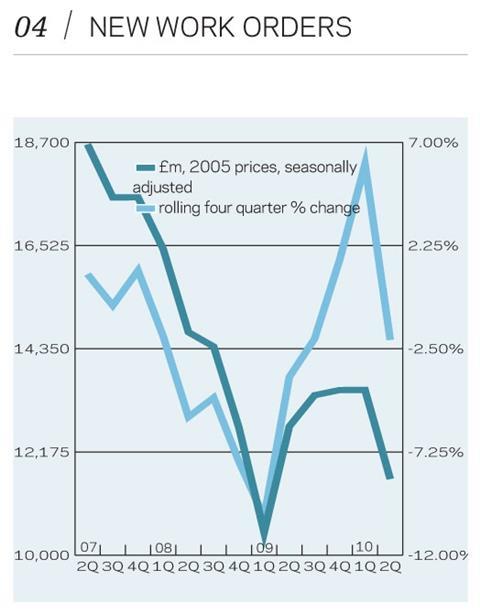 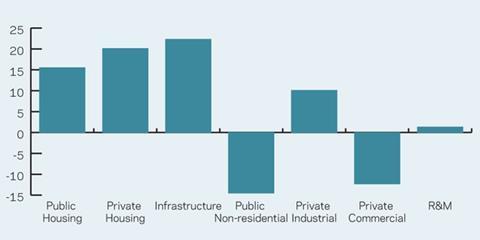 The chart presents sectoral forecasts for 2010 to 2012. The housing sectors, both public and private, are expected to fare well over the forecast period, with growth of 16% and 20%, respectively. Work on the Kickstart housing delivery programme will drive output in both sectors in the shorter term. Credit conditions will continue to ease and this, coupled with a general improvement in economic conditions, will underpin a strengthening of demand for private housing. Having seen output fall dramatically during the recession, the industrial sector will begin to recover next year and the pace of growth will strengthen in 2012.

New work output rose in all 11 regions and nations in 2Q10. The strongest was in the West Midlands where output rose by 26% from 2Q09, as work continues on the upgrade of Birmingham New Street station. There was also double-digit growth in the East Midlands, where output rose by 22% on 2009. Meanwhile, output in the north east and Yorkshire and Humberside rose by a weaker 4% and in London it was 6%.

The performance of the R&M sector was much more mixed, with output falling in five of the 11 regions and nations. The biggest declines were in Wales and the North-east, where output fell by 32% and 30% respectively. There was a substantial 34% jump in R&M output in Scotland and double-digit rises in Yorkshire and Humberside, London (12%) and the South-east (11%).

New work orders varied substantially among the regions and nations. There were marked declines in new orders in East Anglia (54%), Wales (41%) and north west (36%), as well as London (30%) and the South-west (11%). This was in stark contrast to the East Midlands, where new orders in 2Q10 more than doubled from a year earlier (103%). There was also a strong increase in the North-east as new work orders rose by 48%.