Experian Economics shows that construction activity stayed flat throughout the second quarter of the year, but still putting it 5% higher when compared with the same period for 2013

In the three months to June of this year, total construction activity totalled £29.05bn. It was flat on a quarterly basis, yet 5% higher than its level for the corresponding period of last year. On a four-quarter moving total basis output returned to growth in the second quarter of last year. It has continued to increase in each subsequent period.

The second estimate of UK GDP for the second quarter of this year did not account for expenditure data. The estimate has left the quarterly growth rate unchanged at 0.8%, but the increase on the year has been revised up by one percentage point to 3.2%. This release therefore confirms that GDP has now surpassed its pre-recession peak in the first quarter of 2008.

Public housing was one of the better performing sectors. In the second quarter of 2014 it stood at £1.43bn, its highest three-month total on our 17-year records. It increased on both a quarterly and annual basis, by 7% and 28% respectively. It remains somewhat unclear as to what is driving output in the sector, given weakening new orders data, and persistently low levels of public funding. Empirical evidence at the regional level suggests that social housing providers are becoming more adept at sourcing finance from areas other than the public purse. If this is the case growth could be curtailed sharply towards 2016, as the providers look to service outstanding obligations. Rising interest rates would also have a similar effect, especially in the medium term.

It was a similar story for private housing output, totalling £4.96bn, an increase of 4% and 17% on the same measures. Help to buy has had a pronounced effect on the sector at the national level, although its effectiveness at the regional level is varied. We expect the sector to post a further double-digit growth this year and next, before the rate of expansion eases towards 2016.

Industrial construction also made significant gains over the same period, with output in Q2 totalling £937m, up 9% quarter-on-quarter and 17% on the same three months of 2013. Strong new orders figures, coupled with macroeconomic improvement, especially in demand-led components like manufacturing, business investment and overseas demand should help the sector post consistent growth in each year to 2016. Major domestic projects like the London Gateway Logistics Park will provide medium-term buoyancy. Increased reliance on distribution services will have a similar effect.

In contrast to this, infrastructure activity fell on both a quarterly and annual basis, by 4% and 8% respectively. It reached £3.04bn in the second quarter of this year. It was the only new-work sector to fall on both measures. However, given the lumpy nature of new orders, and project driven shifts in the sector, we do expect some growth this year, driven by work starting on site in the rail and road subsectors.

The commercial and public non-residential sectors also exhibited weakness. We expect the former to post consistent growth in each year of the forecast period. In contrast to this, the latter is forecast a further fall this year, before it returns to growth in 2015 and strengthens the following year. The upswing will be primarily supported by surging activity in the universities subsector.

New work orders in the three months to June of this year stood at £11.9bn. They were up 4% on a quarterly basis, yet they were 5% below their level for the same three months of 2013. On a four-quarter moving total basis they began rising in the first half of last year, and have followed a positive profile. In the first half of this year only the private housing and public non-residential sectors saw growth on a half-year on half-year basis, as well as on the same period of last year. 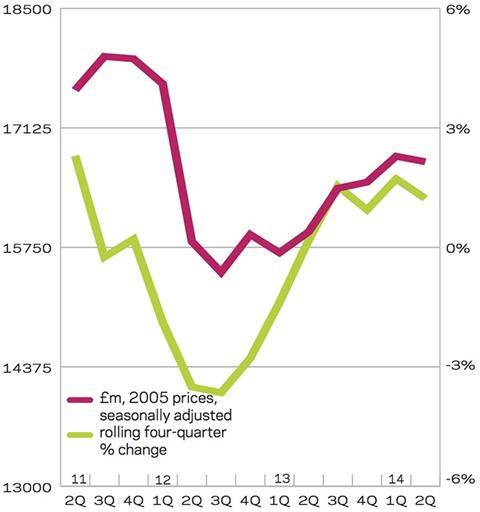 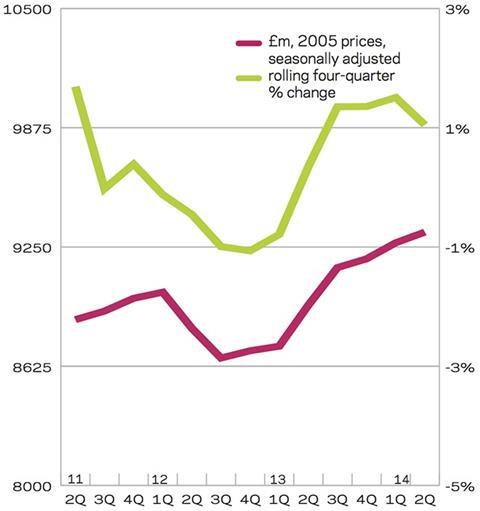 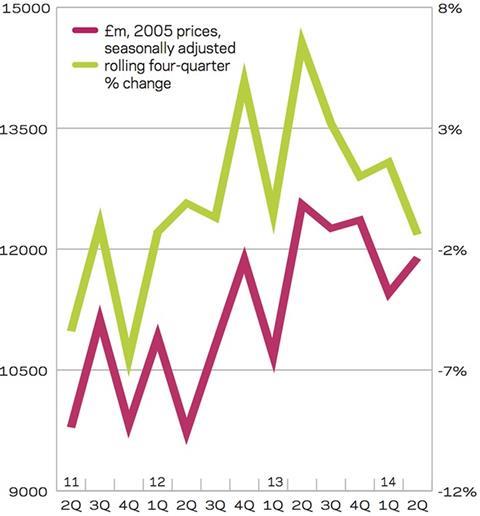 We expect growth across all the new work sectors on an annual average basis, with private housing set for the largest expansion. The public housing sector should be next in line.

Output in the second quarter of this year was higher than it was in the same period of last year for the majority of regions and devolved nations. The exception is Wales, which fell on the same measures.

Repair and maintenance (R&M) grew in eight out of 11 regions and devolved nations, over the same measures. The West Midlands, South-west and Greater London made the largest gains.

New work orders were less positive, with five out of 11 regions experiencing a decline. The North-east, South-west and East Midlands endured the largest falls.