The latest figures from the Office for National Statistics show that total construction output remained flat over the quarter, but registered above levels recorded for the same period last year. Experian Economics reports

The most recent data from the Office for National Statistics (ONS) stated that total construction output in the second quarter of 2015 totalled £31.48bn in 2011 prices. It had remained flat on a quarterly basis, but was 2.4% above its level for the same three months of 2014. On a four-quarter moving total basis, output has been rising steadily since the second half of 2013.

The second estimate of GDP was unrevised from the first, confirming growth had picked up to 0.7% quarter-on-quarter in the three months to July 2015, up from 0.4% in the previous quarter. Encouragingly, the details reveal a more balanced picture, with solid growth in consumer spending and business investment, alongside a rebound in exports. On the domestic front, consumer spending remained a key engine of growth, expanding by a healthy 0.7%, following a rise of 0.9% in the first quarter. Strong confidence, recovering household incomes, low borrowing costs and subdued inflation should continue to buoy spending for the rest of 2015.

About half of the new work sectors saw an increase in activity on an annual basis in the second quarter. Private housing and infrastructure saw the strongest increases on this measure. The former was up 12% to £5.83bn. Performance in the sector has been buoyed by increased demand stemming from government incentives like Help to Buy. Although its effect has varied between regions, its impact at the national aggregate level has been quite pronounced. However, we do expect growth rate to ease slightly over the forecast period (2015-2017) as the level of new orders trends upwards at a less robust pace.

Output in the infrastructure sector rose by 17% in the second quarter of this year. At £3.82bn, it had reached its highest quarterly total since the third quarter of 2011. On a four-quarter moving total basis it ticked upwards for its fourth successive quarter in the three months to July.

A number of key projects are getting underway in the electricity and road sub-sectors. Both of these are also expected to be primary drivers to growth over the forecast period.

Industrial construction was the only other new work sector to post an increase in activity. At £977m, output was 1% higher than its level for the same three months of 2014. On a four-quarter moving total basis output has been rising steadily since the first three months of 2014.

In contrast, the public housing and commercial sectors were the only ones which saw a fall in activity on an annual basis in the second quarter of this year. The former was down 7% to £1.32bn. The drop in output has been driven by a reduction in the level of new orders in the sector, coupled with a meagre pipeline of new work. Some of the downside may also be from uncertainty over the election period, although this effect should be mitigated in the third quarter.

The commercial sector saw a less severe decline. At £5.68bn, output edged down by 1% in the second quarter of 2015 on an annual basis. The sector suffered as the Defence Infrastructure Organisation’s work is now classified under the public non-residential sector. However, much of the associated downside for this was absorbed in first-quarter output numbers.

The public non-residential sector remained flat on an annual measure. However, on a four-quarter moving total basis output ticked downwards in the three months to July 2015 after three successive quarterly increases.

Total new work orders stood at £12.44bn in the second quarter of 2015. They were 2% above their level for the same period of 2014, but remained unchanged on a quarterly basis. Performance at the sector level on an annual basis was quite mixed, however. Only infrastructure and private housing experienced an increase on the same measure, although growth was much stronger for the former. In contrast, both public non-residential and public housing saw the sharpest falls. 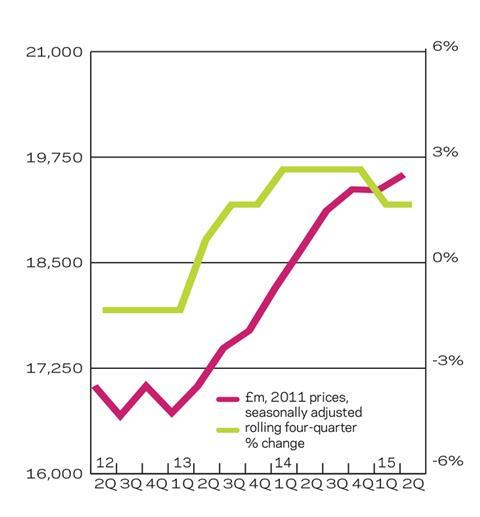 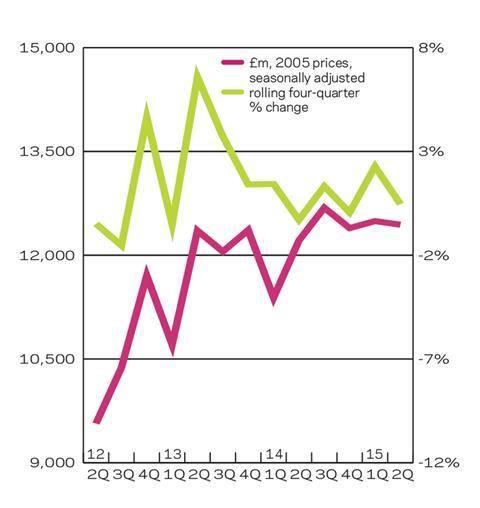 We predict that the majority of new work sectors will post growth on an annual average basis over the forecast period. The exception is public housing, which isn’t predicted to have any growth until 2017 at the earliest. 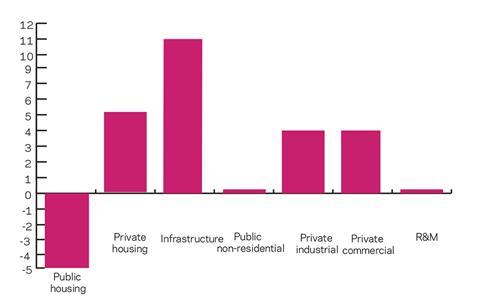 Output in the second quarter of this year increased in eight out of 11 regions and devolved nations, when compared with the same period a year earlier.

Repair and maintenance (R&M) output also grew in three out of the 11 regions and devolved nations, over the same measures. These were the east of England, the South-east, and Scotland.

Only five out of 11 regions and devolved nations saw their orders increase on an annual basis in the second quarter of the year.