The latest construction output data published by the Office of National Statistics showed that the sector continued its strong recovery in the three months to September 2010, although the pace of increase eased from the second quarter of the year.

Rising by 4%, quarter-on-quarter, output in the third quarter of the year totalled just over £26bn (in 2005 prices), the highest quarterly outturn since the third quarter of 2008.
With the exception of infrastructure, output rose across all the new work sectors. Infrastructure construction output fell by 2% during the quarter but still remained above the quarterly outturn seen throughout most of the early years of the decade.

Following an abysmal couple of years for the industrial sector, output rose by 15% in the three months to September 2010 to reach an eight-quarter high. The commercial and public housing sectors both saw output rise by 7% during the quarter, as the former continued to benefit from the Kickstart housing development programme (designed to unlock stalled mixed-tenure developments) and this saw some improvement in demand for, in particular, office developments.

Public non-residential output continued to rise, increasing by 5% in the third quarter of 2010, as work continued on a number of Building Schools for the Future projects. It was the 13th consecutive quarter that output had risen in the sector. The private housing sector saw the weakest growth at just 3%. On the repair and maintenance (R&M) side, the most buoyant sector was public non-residential, where output rose by 9% during the quarter. Private housing R&M work was also boosted during the three months to September as output rose by 8% to its highest quarterly total since the final three months of 2008.

In contrast, public housing R&M declined at a negligible rate of 0.2% as the bulk of work on the Decent Homes programme in England begins to wind down.

In the third quarter of the year, total new construction orders fell for a fourth successive quarter, declining by 4% to their lowest level for six quarters. This adds weight to the view that the recent buoyancy in the construction sector will not be sustained.

Meanwhile, publicly funded construction is likely to suffer over the next couple of years. This comes after the range of government spending cuts announced in the Comprehensive Spending Review, including a cut of almost 50% in public housing funding. However, there are some indications that demand is beginning to recover, which should boost growth in the private sectors. 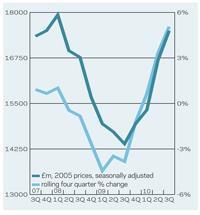 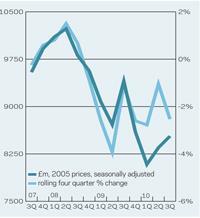 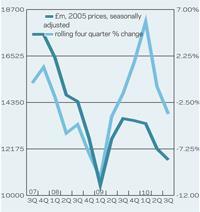 The chart (right) presents sectoral forecasts for 2010 to 2013. The most buoyant sector over the forecast period is projected to be infrastructure, with output 44% higher in 2013 than 2009’s level. This is not surprising given the number of projects either on site or due to start in the next couple of years - Crossrail, Thameslink, Thames Tideway, Reading station upgrade and Birmingham New Street improvement, to name just a few.

The public non-residential sector is expected to be the worst performing, as government spending cuts begin to be felt across the board. The marked fall in the public housing budget for 2011-2015 means that output is expected to contract markedly in the shorter term.

New work output rose, year-on-year, across all regions and devolved nations in 3Q10, the second successive quarter that growth had been recorded across the board. The strongest was in West Midlands (31%), followed by North-east (27%) and East Midlands (26%). Yorkshire and Humberside saw the weakest growth, with
output rising by just 8%, while the South, West and North-west all saw growth of 13%.

It was a much less positive performance from the regional sectors, with just two regions/nations seeing an increase on a year earlier. R&M output rose by 33% in the South, while Yorkshire and Humberside saw a rise of 10%. Strongest falls were North-east (33%), West (26%) and East Anglia (21%). R&M output in West Midlands fell by 1%, while East Midlands saw a 4% decline.

Only four of the 11 regions and nations saw an increase in new orders in 3Q10. New orders jumped by 58% in the North-east and by 44% in London. West (16%) and South (3%) saw weaker increases. New orders in West Midlands fell by 47% and North-west saw a 41% drop, following a particularly strong outturn in 3Q09. Weakest falls were in East Midlands and East Anglia, with declines of 4% and 9% respectively.