The latest figures from the Office for National Statistics show that total construction output dropped across the quarter, but is marginally up on a year ago

Data from the Office for National Statistics (ONS) stated that output stood at £32.4bn in the third quarter of 2015. It was down 2% on the previous quarter, but 1% above its level for the same three months of 2014. On a four-quarter moving total basis, activity has been trending upwards at progressively weaker rates since the first half of 2013.

The final estimate of GDP for the third quarter of 2015 revised down growth from an earlier estimate of 0.5% quarter-on-quarter to 0.4% in real terms. Annual growth was also cut from the previous reading of 2.3% to 2.1%. In addition, the latest release revised down growth in the second quarter from 0.7% on a quarterly basis to 0.5%, and from 2.4% to 2.3% on an annual basis.

Output growth among the new work sectors was mixed in the three months to September 2015, when compared to the same period a year earlier. The industrial and infrastructure sectors made the strongest gains, with activity in the former up 15% year-on-year to £1.15bn. Expansion is projected to moderate over the forecast period after its quite strong showing in 2015. However, it is still expected to post annual average growth in excess of 4% in the three years to 2018, largely driven by the warehouse sub-sector.

The latter also performed very well, with output totalling £4.44bn in the third quarter of 2015, up 31% on the corresponding quarter of 2014. As long as there is no further slippage on nuclear new build, infrastructure is expected to see the most robust growth of any sector over the forecast period. Activity in the water & sewerage sub-sectors under Asset Management Programme 6 (AMP6), which runs from 2015 to 2020, should peak around 2017/18 if historical precedent is anything to go by.

In contrast, public housing saw the sharpest fall, with activity in the three months to September 2015 down 26% to £1.1bn, when compared to its level for the same quarter of 2014. The prospects for the public housing sector are poor. Housing starts were down by 14% in the first three quarters of 2015 compared with the same period a year earlier and new orders have declined by 37%. While some of these falls have already been reflected in output declines in 2015, they suggest another reasonably substantial contraction this year.

The public non-residential sector experienced a decline on the same measures, with a 5% contraction to £2.3bn. While the focus of further public expenditure cuts will primarily be on resource rather than capital spending, it is unlikely that there will be any significant uplift in the latter, except for large infrastructure projects.

At £5.9bn, commercial activity was unchanged in the three months to September 2015, when compared to the same period of 2014. Growth in commercial construction output should accelerate again after its poor 2015. The offices market remains buoyant with many of the view that the London market is approaching the peak of its current development cycle. Further tightening of Grade A space availability is leading to a return of speculative building in many of the main regional markets.

Total new work orders stood at £12.59bn in the third quarter of 2015 in 2005 prices. They were up 0.8% on the previous quarter, but remained unchanged when compared to the corresponding three months of 2014. The majority of new work sectors experienced a decline in orders on an annual basis in the three months to September 2015. The exception was infrastructure orders, which were up 63% on the same measure. All of the remaining new work sectors saw double digit declines when compared to their level a year earlier. 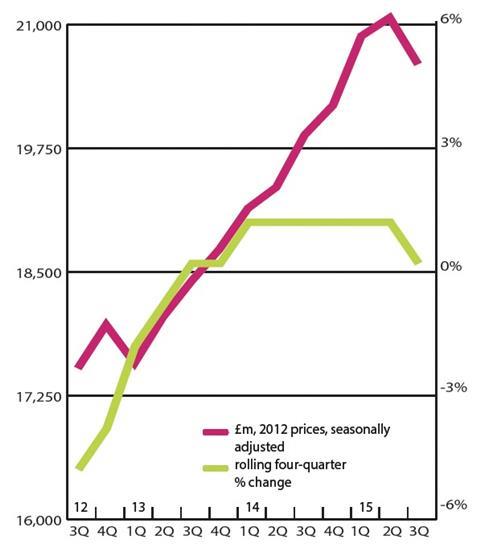 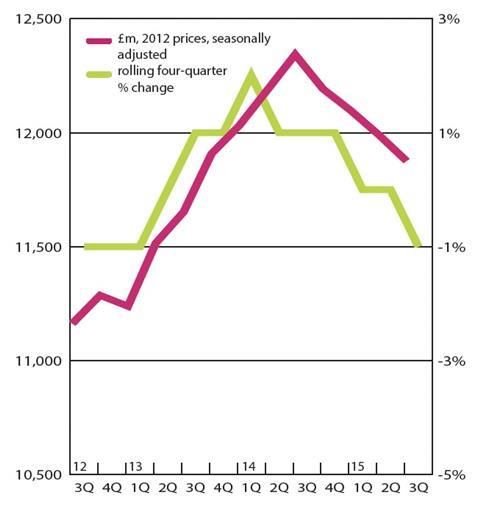 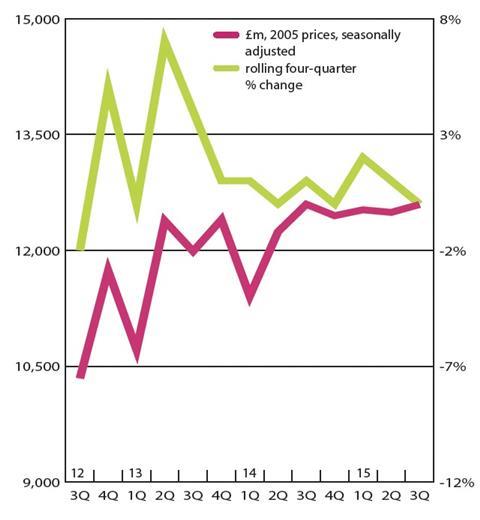 The majority of new work sectors are projected to post growth on an annual average basis over the forecast period. Infrastructure activity is set for the strongest expansion, followed by the industrial sector. In contrast, only public housing is predicted to contract on the same measure. 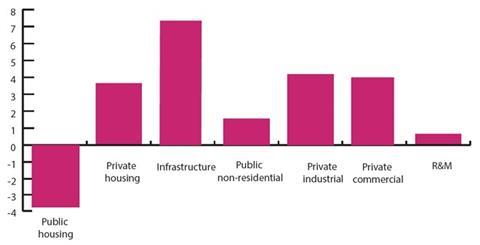 New work output in current prices in the third quarter of 2015 increased in eight out of 11 regions and devolved nations when compared to its level for the corresponding period of 2014.

Activity for the repair and maintenance sector (R&M) only increased in four out of 11 regions and devolved nations on the same measures. Of those, Scotland saw the largest expansion in percentage terms.

New work orders increased in six out of 11 regions on an annual basis in the third quarter of 2015. The East Midlands saw the sharpest increase in orders on this measure in percentage terms.