Construction output rose by 3% in Q3 of 2017 with a particularly strong performance from public sector housing. But although infrastructure is expected to do well, pressures including Brexit may see a slackening in the quarters to come. Experian Economics reports

The first Office for National Statistics estimate of GDP for Q3 of 2017 showed that the economy grew by 0.4% quarter on quarter, in real terms, against 0.3% in the previous two quarters. Service sector output increased by 0.4%, and remains the largest contributor to GDP growth.

We expect output rises to hold back in the final quarter of the year, until inflation slowly dissipates through 2018, and wage increases eventually pick up.

Between July and September 2017 total construction output rose by 3% to £38.19bn (in 2015 prices) compared with the same period in 2016. Among the new work sectors, the public housing market experienced the strongest year-on-year growth of 14% to £1.38bn. Public housing output is expected to grow by a more modest annual average of 6% over the next three years with a fall in business investment triggered by Brexit uncertainties potentially undermining social housing providers’ ability to raise finance. However, recent Budget announcements around government plans to focus on encouraging council housing building could offset some of these impacts and provide some uplift.

Over the same period, the private housing sector posted a reasonable 6% expansion to £7.9bn, making it the largest new work sector for the eighth consecutive quarter. The sector is expected to continue growing over the forecast, albeit it a slower rate of 3% per year. Growth in new orders has slackened in recent quarters and we expect this trend to continue as uncertainty around economic conditions curbs investor appetite at the same time as affordability issues dampen buyer confidence and demand. However, this should be put in the context of the fact that private housing activity, at least in output terms, is running at a historically high level. House price growth is expected to average 2.4% per year between 2018 and 2020.

In the third quarter of 2017, infrastructure output increased by 2% to £4.6bn compared with the same period a year earlier. The sector is expected to experience the strongest annual average growth out of all sectors at 7%. The Highways England (HE) investment programme in major road network schemes is the main driver of roads output, with funding being extended for an extra year beyond the current five-year investment period to March 2020. Continued investments in rail projects are another major driver of growth, with expenditure on HS2 set to increase in each year of the review period. As work on Network Rail’s Control Period 5 (CP5) expenditure program concludes by March 2019, a further £47.9bn in 2017/18 prices has been allocated for the subsequent CP6 period from April 2019 to March 2024 in England and Wales. Works on Hinkley Point C nuclear power station are also anticipated to contribute to double-digit growth overall from 2019.

The public non-residential sector saw a year-on-year contraction of 8% to £2.49bn in the third quarter of 2017. Output in the sector is expected to continue declining.

Industrial output experienced a slight recovery in the third quarter of 2017, increasing 3% in year-on year terms to £1.1bn. Reasonably strong growth is forecast for 2018, and more modest expansion is predicted for 2019 and 2020 as the number of projects starting on site decline.

The commercial market posted another year-on-year increase to £7.22bn in the three months to September 2017, albeit at a modest rate of 1% and a slight contraction in quarter-on-quarter terms. It has become clearer during 2017 how the heightened uncertainty as a result of Brexit is impacting this sector in particular. It has undoubtedly led to a significantly more cautious attitude by investors and developers to bringing new projects forward. With little in the way of notable projects in the other commercial sub-sectors over the forecast, annual growth in the sector is expected to decline by an average of 4% per annum over the forecast period. 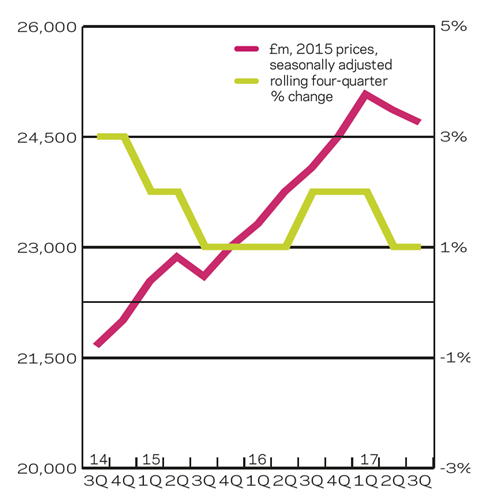 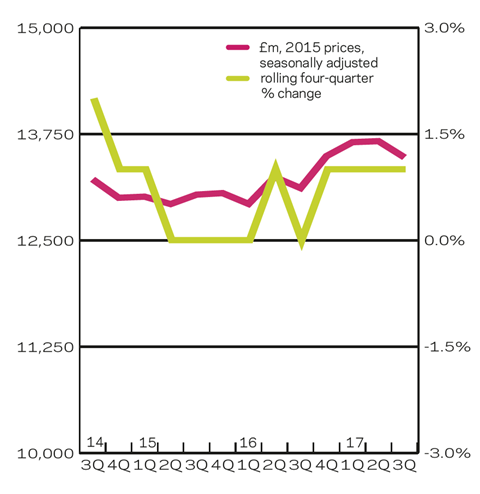 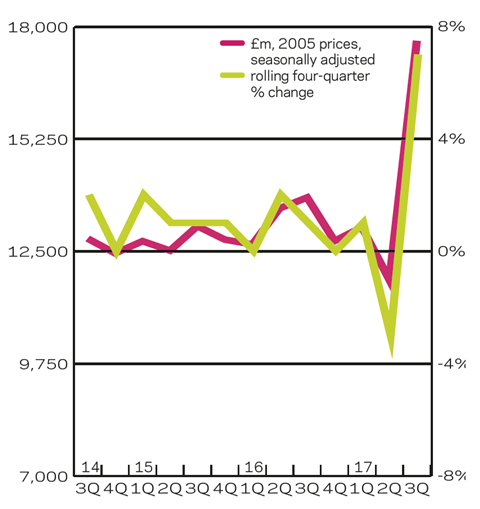 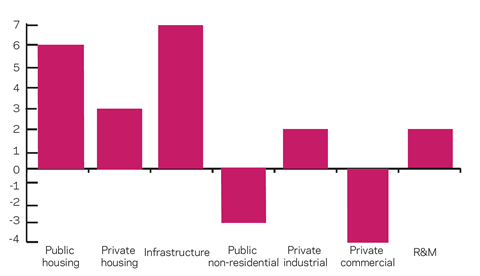 In the three months to September 2017, new work output in current prices increased in eight out of 11 regions and devolved nations on an annual basis.

Output for the repair and maintenance sector (R&M) increased in six out of 11 regions and devolved nations on the same measure.

New work orders increased in six out of 11 regions on a yearly basis in the third quarter of 2017. The West Midlands and Greater London experienced the biggest absolute rises in orders as a result of HS2, as they went from £1.53bn to £4.68bn and £3.23bn to £6.37bn respectively.