Construction output is rising, driven largely by housing, both public and private, but public work is slipping – and the offices market is likely to be hit hardest by Brexit. Experian Economics reports

The latest figures released by the Office for National Statistics showed UK GDP increased by 0.6% in the third quarter of 2018. This was in line with market expectations and represents a 1.5% rise compared with the same quarter the previous year. The strong performance of the past four years means the UK economy has recovered ground lost during the 2007/08 recession more quickly than seemed likely a few years ago. But the repercussions of the recession and the Brexit vote are set to hamper economic progress for a few years. The pace of expansion is likely to be well below the long-term trend throughout 2018-22, with GDP growth averaging 1.6% a year, against 2.6% from 1981 to 2008.

Between July and September 2018 total construction output increased by 2% to £41.56bn (in 2016 prices) compared with the same period in 2017. The public housing market contributed with a 3% rise to £1.64bn. The sector is expected to grow by an annual average of 7% over the next three years. Recent budget announcements of increased funding for social and affordable housing should boost both public and private housebuilding but growth is likely to be held back initially by the uncertainties around Brexit. The announcement of the removal of the local authority borrowing cap could prove a game-changer, bringing growth in public housing output to double-digit levels by 2021.

For new work, private housing posted the strongest annualised growth in Q3, rising 10% to £9.35bn. It is expected to continue growing over the forecast period at 3% per annum: with output already at historic highs and given the turmoil of Brexit, the room for further robust growth is constrained. However, in the absence of a recession the ongoing mismatch between supply and demand is likely to keep activity in the sector moving upwards.

Infrastructure output in Q3 rose 6% to £5.26bn, compared with a year earlier. It is expected to experience the strongest annual average growth of all sectors over the short term, at 8%. Much of this growth forecast is from already committed mega projects, such as HS2 and Hinkley Point.

The public non-residential sector experienced the largest annualised contraction of all new work sectors in percentage terms for the fifth consecutive quarter, falling 11% to £2.32bn in Q3 of 2018. Output for 2018 as a whole is estimated to have dropped to its lowest level since 2007 in real terms. Anecdotal evidence has suggested that work under the Priority School Building Programme has not been coming through as quickly as anticipated and the government has cooled somewhat on the free schools one. This is not that surprising given the current focus on the housing crisis. Some modest increase in output is likely as more education work comes through and work restarts on delayed hospital projects such as the Midland Metropolitan in Sandwell. Output is expected to average a modest 1% in annual average growth terms over the new forecast period to 2021, with growth flattening out by the end.

Output in the industrial sector remained fairly stable, with a modest 1% downtick compared with Q3 2017, to a total of £1.23bn. Output is expected to remain fairly flat through 2019, gradually recovering thereafter, giving annual average expansion of around 1%. The components of industrial construction are likely to move in different directions as Brexit uncertainties impact on them in diverse ways.

Despite remaining the second-largest new work sector by a clear margin, commercial work saw a third consecutive period of decline, with an annualised contraction of 5% to £7.34bn in the three months to September 2018. This sector – especially offices – is the most exposed to Brexit uncertainties. 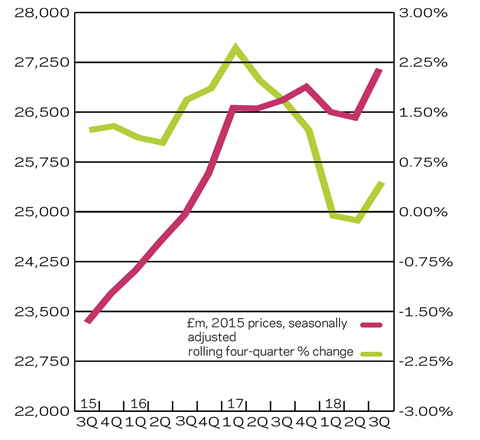 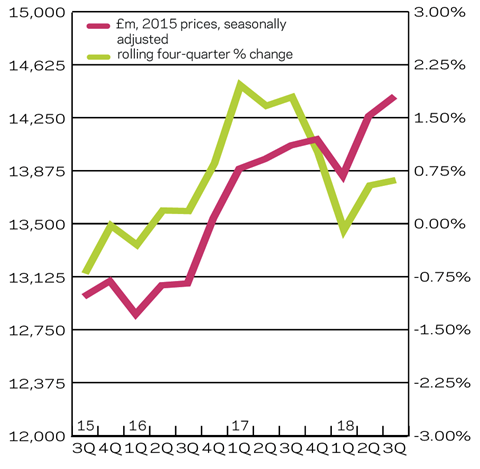 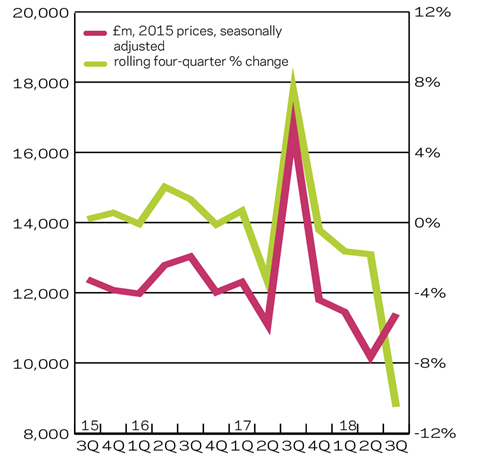 The public housing, private housing, infrastructure, public non-residential and industrial sectors are all expected to post annual average growth over the latest forecast period, with infrastructure output growth remaining the strongest. Repair and maintenance (R&M) output is also expected to remain buoyant throughout. The private commercial sector is forecast to post average yearly declines over the same period, however. 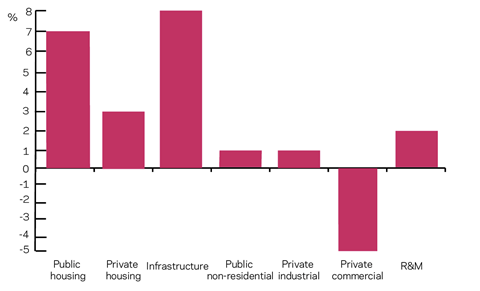 In the three months to September 2018, new work output in current prices increased in seven out of 11 regions and devolved nations on an annual basis.

Output for the R&M sector increased in eight out of 11 regions and devolved nations on an annual basis.