In 2010 construction output totalled £101bn, in 2005 prices, an increase of 6.5% on the previous year. This was largely driven by strong performances from the new work sectors, with repair and maintenance work declining during the year, particularly for non-residential.

In the three months to December 2010, growth was strongest in the public housing sector where output rose by 37% from a year earlier. Work on Kickstart-funded schemes has been gaining momentum and further allocations were made under the 2008-11 National Affordable Housing programme in the second half of the year, after a funding restriction related hiatus. Private housing output also rose during the final quarter of the year as output totalled £3.2bn, 21% higher than the same quarter of 2009.

Growth of 13% was recorded in commercial construction output, a second successive quarterly rise. Some developers have demonstrated their confidence in the London market by restarting a number of projects, including the Leadenhall Street Tower and 20 Fenchurch Street.

Infrastructure was the only new work sector to see output fall during the final quarter, surprising given the number of large ongoing projects - Crossrail; Thameslink; the M25 widening. However the decline was marginal at 1% and the quarterly outturn of £2.7bn was above the totals seen in most of the decade to 2010.

The private residential R&M sector held up unexpectedly well, with output increasing by 18% from a year earlier in the final three months of the year.

Following growth in 2010, construction output is likely to decline this year, as public sector cuts begin to bite. There have been early indications of returning demand in some private sectors, but this is unlikely to outweigh the falls on the public side in the short term.

The chart below presents sectoral forecasts for 2010 to 2013. The public sectors - public housing and public non-residential - are expected to be the weakest over the forecast period to 2013. This is not surprising considering the significant cuts in public spending that have been announced. The infrastructure and industrial sectors are forecast to be the strongest, with output in each more than 40% higher than its 2009 level. There are a number of large infrastructure projects that are currently on site and due to continue throughout the forecast period, not least Crossrail. Preliminary works for the first nuclear power station at Hinkley Point are also expected to start in the next couple of years.

New work output rose, year-on-year, across all the regions and devolved nations in the final quarter of 2010. The strongest growth could be seen in the North-east region where output increased by 25% from a year earlier, followed by the West Midlands (19%). In contrast to this, output rose by just 4% in the North-west and by 7% in both the South and Yorkshire and Humberside regions.

The performance from the regional R&M sectors was more varied, with output increasing in five of the 11 regions and devolved nations. While its new work sector was strongest, the North-east R&M sector was the weakest, with output declining 44% in 4Q10. The West (-22%) also saw a decline. The South was the star performer as output jumped 41% from a year earlier. 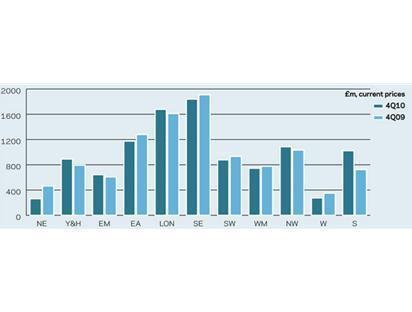 Eight of the 11 regions and devolved nations saw an increase in new orders in 4Q10. The most buoyant was the West where new orders jumped by 63%, while the South-west saw a marked increase of 41% and the South-east a rise of 32%. The other end of the scale saw a 36% fall in the North-east and a 22% decline in Yorkshire and Humberside. New orders in the West Midlands fell by a weaker 7%.