3D-printed glass: Print me off another Shard

Glass has resisted the technological advancements in 3D printing, but now a team from MIT has invented a technique for printing fully transparent glass. The breakthrough, says Ike Ijeh, could revolutionise the way we make windows, cladding and even full facade systems 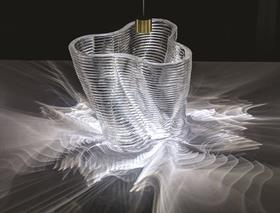 3D-printing technology has made massive leaps and bounds in recent years. There was a time, not too long ago, when the concept existed in the realm of science fiction, with the “protein resequencer replicator” (food synthesiser to you and me) in Star Trek - whose fans were once the only audience that took these kinds of things seriously.

But today that has all changed, as predicted two years ago by Autodesk senior industry program manager for construction Dominic Thasarathar. “It’s a very interesting time for the world of 3D printing. BIM and the Cloud have already taken the construction industry by storm and prove that trends within the profession are inevitably accelerating towards digital realisation. It’s partially cost driven; digital realisation can deliver the predictability and speed that is particularly attractive in the current difficult global economic climate.”

Accordingly, all manner of objects are now commonly created using 3D modelling and printing technology and it has had an enormous impact on architectural fabrication techniques. All the structural steelwork on London’s 48-storey Leadenhall Building - commonly known as the Cheesegrater - was fabricated from 3D drawings, and designers and engineers such as Arup are now at the forefront of developing additive manufacturing technologies that can essentially print a huge range of architectural nodal components.

But one particular material has resisted these technological advancements: glass. For David Benjamin, founding principal of Autodesk eco-design studio The Living, “glass hasn’t really had the explosion in technical innovation that has happened with other materials like plastic”.

Until now, that is. Earlier this month, Media Lab, an interdisciplinary research unit at the Massachusetts Institute of Technology (MIT), made a startling announcement: they have invented a technique for 3D-printing fully transparent glass. The particular kind of glass the printer produces is known as soda lime glass, which has a huge range of applications, from windows to domestic glassware. 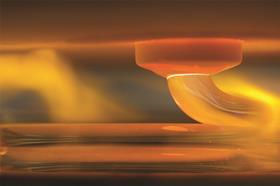 Some of the objects MIT Media Labs have produced using 3D-printed technology. Liquid glass is poured through a ‘printer’ nozzle

Benjamin, along with several others within the research and development community, has described this development as a “game-changer” that could potentially revolutionise the possibilities and characteristics of architectural components such as windows, cladding and even full facade systems.

Media Lab has named the new system G3DP and to work it requires a bespoke dual-chamber 3D-printer with each chamber stacked above the other and separated by a rotating custom nozzle. The uppermost chamber acts like a kiln and is fitted with heating coils capable of maintaining temperatures of 1,000°C and above, the minimum heat required to liquefy the glass to a state that renders it malleable.

This upper compartment acts like a print cartridge from which a continuous stream of liquid glass flows down to the lower chamber.

In order to do so, the molten, or liquid glass, passes through a specially customised nozzle fitted with its own heating coils to maintain the required high temperature. The nozzle oscillates to produce whatever object it has been pre-programmed to create from 3D drawings created in the design stage, thereby acting in a similar way to an ink jet printer. 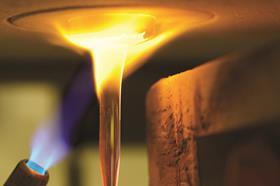 Because the nozzle has to maintain the liquid glass at a temperature high enough for it to flow, a special alumina-zircon-silica nozzle is used rather than the platinum that is usual in the conventional glass manufacturing process. As aluminium oxide is highly resistant to heat, this ensures that the molten glass remains hot enough to maintain a consistent flow through the nozzle without the nozzle itself melting.

Temperatures are significantly reduced in the lower compartment, which acts as a cooling chamber in which the glass eventually becomes solid. As the reduction in temperature applies stresses that expose the glass to the risk of shattering, the cooling process is slow and gradual and still supplies sufficient heat to ensure that the glass doesn’t break.

Crucially, this radical new printing process could have a significant impact on the manufacture of building components. While windows are the most obvious application, the Media Lab team claims there may be even more ambitious possibilities. According to a Media Lab report, “a multifunctional building module can be created by coupling glass’ properties [compressive strength, optical transparency and chemical inertness] with the ability to deposit material in complex cross-sections.” 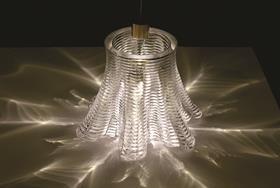 Their aims go even further, according to their report. “[We] are investigating a building envelope for ‘greywater reuse and integrated thermal building control’, which treats greywater through a system of microlenses submerged in a microbial solution to create the photocatalytic treatment process. The optical properties exhibited from the printed glass structures can be further refined to concentrate light by customizing extrusion profiles.’ MIT’s long-term goal is to manufacture composite glass facades with integrated ventilation and insulation systems that are capable of modulating environmental conditions.

These aspirations concur with Benjamin’s prognosis of the potential impact of 3D-printed glass on the construction industry. “This is a really interesting time for glass technology, and what has been achieved at MIT represents the first version of all kinds of technology that bring glass in line with other 3D-printing advancements and have the potential to be truly fascinating.”

Benjamin identifies two key advantages with the newly developed glass system. “It removes size limitations, which is one of the biggest constraints when it comes to specifying glazing. With customised fabrication of this kind a single pane of glass could be scaled up to be virtually any size and shape.” While at present the size of the glass components is limited by the size of the printer, progressions in contour crafting technology, the robotic construction system that enables 3D-printed objects to be produced on a much bigger scale.

The second advantage, as intimated by Media Lab and expanded here by Benjamin, concerns the potential the new system has to create facade solutions. “Glass could be blended in with other elements to create a composite unit that incorporates all manner of architectural features and specifications related not just to windows but the wall construction around it. These could include heat conductors, emissivity characteristics, light sensors, shading performance or insulation properties.

“These specifications could simply be programmed in at concept stage to produce a fully specified facade component. This could enable glass to have a far more fluid and dynamic relationship with the entirety of the building envelope.” 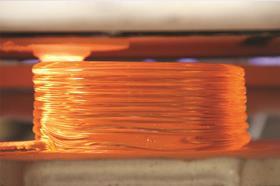 Benjamin himself has long experience of this area of research. Prior to its acquisition by Autodesk in May 2014, The Living developed
a groundbreaking smart glass product known as Living Glass, a thin, transparent, non-mechanical surface in which “gills” would automatically open and close to regulate air quality and carbon dioxide.

Since the move to Autodesk, its work has continued and Benjamin is now developing facade components, including glass, where series of embedded sensors and actuators enable the building envelope to become more organically interactive in a visual and performance sense or, in Benjamin’s more simple words, “to come alive”.

All these lines of research suggest a future where glass technology finally catches up to advancements made with other construction materials. For Benjamin, these developments are anchored in one crucial and mutually beneficial relationship, “the combination of super-advanced simulation tools and the ability allowed by new technologies to more precisely determine facade performance”.