With the government-commissioned review into the cost-effectiveness of tidal lagoons giving Swansea Bay Tidal Lagoon the thumbs up last month, could this be a watershed moment for tidal energy? Ike Ijeh investigates the benefits and risks 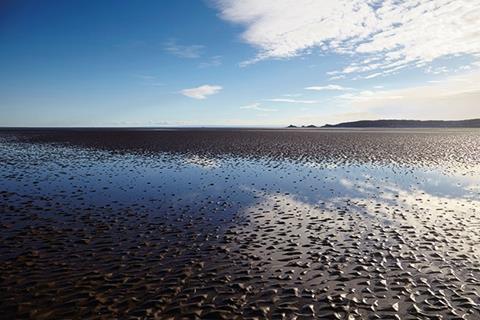 Last month, plans for the world’s first-ever tidal lagoon took a significant step towards becoming a reality. The £1.3bn Swansea Bay Tidal Lagoon was the subject of an independent government-commissioned review assessing its viability which was published in the new year.

After a detailed eight-month analysis, report author and former UK energy minister Charles Hendry MP was unambiguous in his support of the scheme. He said: “The evidence is clear that tidal lagoons can play a cost-effective role in the UK’s energy mix and there is considerable value in a small pathfinder project … Tidal lagoons would help deliver security of supply; they would assist in delivering our decarbonisation commitments; and they would bring real and substantial opportunities for the UK supply chain. Most importantly, it is clear that tidal lagoons at scale could deliver low carbon power in a way that is very competitive with other low carbon sources.”

The report’s findings came as a huge boost to renewable energy firm Tidal Lagoon Power (TLP) which is seeking subsidies to build the project. TLP believes that the Swansea facility could generate enough electricity to power all the homes in Wales. But even more ambitiously, it views it as a test-bed that, if eventually rolled out across the UK in a further five bigger plants, could provide as much as 10% of Britain’s energy requirement within a decade.

This new technology could therefore make a key contribution to government efforts to satisfy EU requirements to source 15% of national electricity from renewable sources by 2020, a commitment that, for the time being at least, is still binding. 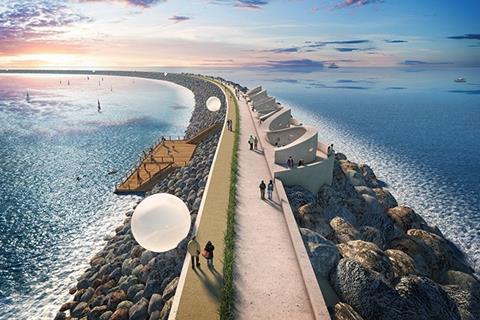 The tidal lagoon will be formed by an enclosed stretch of water surrounded by an accessible 9.5km barrier wall

For TLP chief executive officer Mark Shorrock tidal energy is a win-win. “Swansea Bay Tidal Lagoon is a vision of how Great Britain can replace part of our ageing power station fleet with low cost, reliable power that also revitalises our industrial heartlands and coastal communities.

“When we pay our electricity bills, we are mostly supporting other countries’ energy industries and other countries’ workers. It doesn’t have to be that way. Tidal lagoons will generate electrons that work for Britain and bring down bills. Never has there been such an untapped energy source. Let’s really harness it, let’s create jobs and create a brand new industry and let’s set up the necessary authority that governs how all this is delivered.”

The proposals at Swansea Bay are core to achieving this ambition. The project was awarded a development consent order in 2015 and aims to start construction in 2018. This marks a two-year delay from the original start date. The government is expected to respond to the Hendry Review in March but one of the key stumbling blocks still likely to be in place concerns the setting of the “strike price”, the price the government is prepared to pay for the energy the lagoon will produce.

If or when construction begins it is expected to last for four years with the first power being generated a year before completion. The anticipated 2018 start also suggests a programme presumably designed to optimise central government’s current infrastructure momentum as demonstrated by its recent support of major works relating to Heathrow, Hinkley C and HS2.

As Hendry says, the Swansea project has been designed as a “pathfinder” scheme with 320MW installed capacity. However, TLP hopes that this will provide a “scalable blueprint for a fleet of much larger UK tidal lagoons” dotted at other strategic points along the western British coastline including Cumbria and Colwyn Bay. 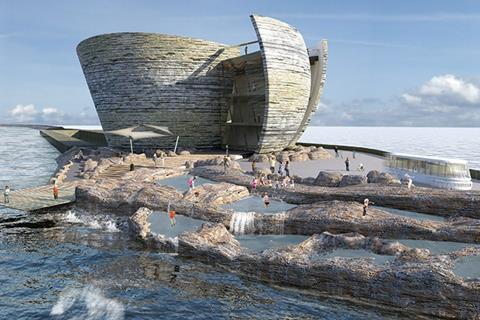 Juice Architects has designed a visitor centre for the proposed lagoon

A crucial point in TLP’s argument is that despite the massive initial capital outlay, Swansea will eventually provide electricity at a significantly lower cost than the planned Hinkley C nuclear power station. It is a point on which Hendry largely agrees, estimating that over its planned 120-year lifespan, Swansea Bay will only cost each household in Britain about 30p per household a year for the next three decades.

Although the Environment Agency’s jurisdiction lies primarily in England and it will not play any planning or regulatory role with regard to the Swansea Bay facility, Ross Lowrie, the organisation’s senior renewables business and environment adviser, also largely welcomes the introduction of tidal lagoon technology onto the British coastline. “They can offer tremendous benefits and can be a hugely reliable source of renewable energy. They are ultra-low carbon and could potentially be a massive help in achieving UK targets on carbon reduction. They can also be a big boost to social and economic regeneration in coastal areas and can potentially provide a new and unique form of recreational attraction.”

Lowrie also maintains that tidal lagoons generally stack up well in comparison with other renewable energy sources. “Each renewable energy source has unique characteristics so it’s not necessarily useful to compare them. But we can fairly confidently say that the UK being an island obviously makes hydropower a particularly attractive solution. Additionally, tidal lagoons are potentially more predictable than wind power, are less seasonally dependant than solar power and are greener and have a lower waste storage capacity demand than nuclear power.”

So what exactly is a tidal lagoon and how does it work? As the name suggests, a tidal lagoon is an artificially isolated body of water cordoned off from the sea where tidal power is harnessed to create electricity. Tidal lagoons differ from tidal barrages in that barrages are dam-like structures placed across a river estuary or bay in order to generate energy as opposed to the separated body of water created by lagoons.

While there are as yet no tidal lagoons in existence, there are around a dozen tidal barrages across the globe with the largest and oldest located on the Rance River in Brittany, France. Yet this has an output of 250MW of power, significantly less than the 320MW anticipated at Swansea which is itself a smaller “pathfinder” tidal lagoon model. 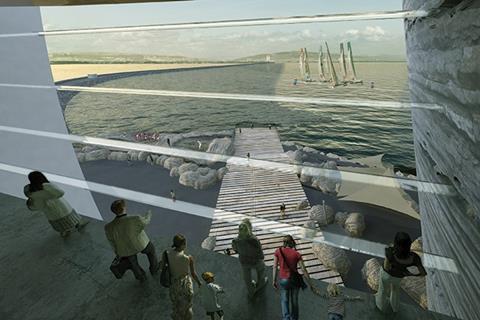 The visitor centre will provide views across Swansea Bay

Tidal lagoons are a facility the UK is uniquely placed to exploit due to the fact that after Canada, the British Isles has the highest tidal range in the world. At Swansea alone the tidal range is between a massive seven to nine metres.

There will be two main components to the Swansea bay lagoon. The first will be the wall which will act as the barrier between the sea and the isolated pool of water that will form the lagoon. The lagoon itself will measure 11.5km² and its barrier wall will be 9.5km in length. The second component will be the turbine housing, with a 550m-long concrete channel that will house the power-generating turbines. The housing will be located along the section of wall that faces towards the sea.

The barrier wall will be constructed by the continuous build-up of high-strength textile geo-tubes layered up from the sea bed. The tubes will be filled with gravel and sand sucked up from the local sea bed by a specialist dredger. The area between the tubes will be filled with sand eventually forming a triangular wall structure covered in a final layer of graded rocks. The wall will reach a height of 2.8m above full-tide level and a continuous public walkway will be placed at its apex. The full circumference of the lagoon will be enclosed by this structure.

The wall barrier will be broken by the concrete turbine housing. This concrete structure will contain 26 bio-directional turbines each one 18m high and 6m in diameter. The turbines will be set within a steel wicket structure which will act as a gate and will be located at the centre of a tube burrowed through the housing. As the tide rises, the wicket closes isolating the lagoon from tidal flow and leaving the water level within it lower than the sea level outside it.

When the wickets are opened, seawater rushes through the tubes and flows into the lagoon raising its water level and powering the turbines. This process can create up to 16MW of energy per hour. Equally as the tide falls the process is reversed and releases raised lagoon water back into the sea, creating additional turbine-powered energy along the way. With the rise and fall of the tides the energy-generating process can occur up to four times a day. 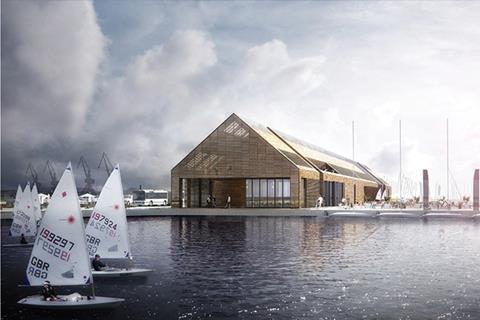 But the process is not without its risks and ironically one of the key risks is the inverse scenario of what Lowrie identifies as one of the key advantages of the tidal lagoon solution: flood protection. “Potentially tidal lagoons can act as flood defences by diverting the flow of water into a specific area and thereby essentially creating a protected area of coastline. But the opposite is also true. Tidal lagoons involve the wholesale deflection of water from the lagoon back into the sea, that water has to go somewhere and extensive detailed modelling is still required to prove that that process does not present a flooding risk.”

Another potential risk linked to flooding is sedimentation. The manipulated flows of water could potentially create areas of sedimentation along the sea bed where they did not exist before. Lowrie maintains that this could have a “profound” environmental impact which could require additional dredging of the sea bed to ensure that flooding risk is not increased. He also points out that plans will need to considered within the context of climate change and the projected rises in sea level by 2075.

Another challenge concerns the ecological impact of tidal lagoons, an area which Lowrie insists still contains considerable “unknowns” and still requires a “huge” amount of modelling. “The coastal areas with the highest tidal ranges are often those with the highest level of environmental protection. This is because they tend to present the most dynamic ecological environments with regard to fish habitats and migratory bird patterns, although this isn’t the case at Swansea Bay. It might be possible to compensate for the potential ecological loss caused by tidal lagoons by the creation of compensatory habitats but it is impossible to mitigate against that loss.”

Others, such as professor Paul Ekins, professor of energy and environment policy at University College London, believe that tidal lagoons in themselves are economically and environmentally useless unless they come as part of a nationwide fleet. While both Hendry and TLP allude to the long-term creation of such a network, as yet it is only Swansea Bay that enjoys any level of certainty.

When it comes to tidal lagoons, it is that lack of certainty that is perhaps the biggest risk. Lowrie himself describes the level of uncertainty that still surrounds tidal lagoon technology and impact as of a “completely different level of magnitude compared to what we’re used to dealing with”. Consequently, as Douglas J Arent, executive director of the Joint Institute for Strategic Energy Analysis at the National Renewable Energy Laboratory in Colorado, US, explains, the stakes at Swansea Bay could not be higher.

He says: “If it’s put together and it’s a success, people will look for other similar areas where there might be similar development opportunities. But if it disappoints, it could quash the chances of further projects elsewhere.”