BMW Welt: How’s this for a car showroom? 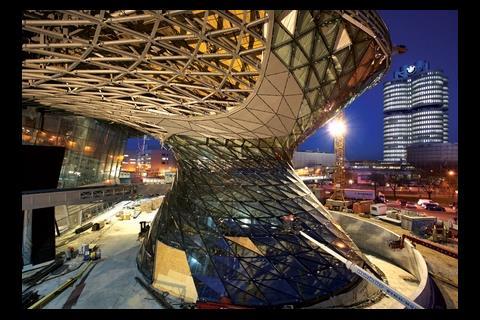 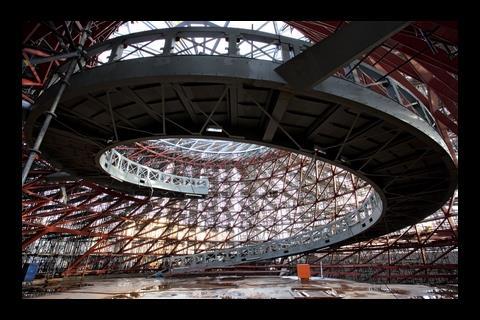 The centrepiece of BMW World is this tornado-shaped events space that will be used for important ceremonial occasions, such as car launches 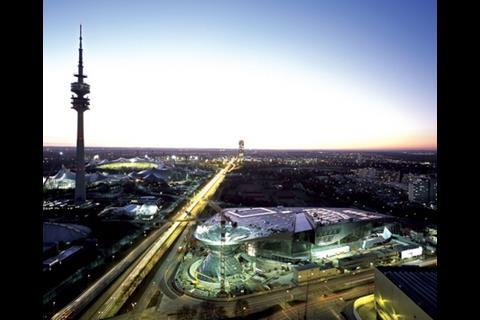 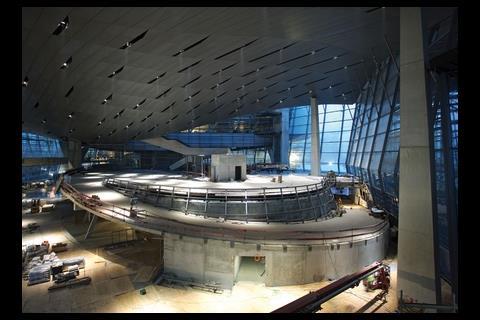 The highlight for many people will be the car collection point. Happy buyers go down a walkway from a lounge to the raised podium where their new car is waiting, then drive out of the building via the spiral ramp

The war between car-makers BMW and Mercedes-Benz has just been ramped up another notch with this addition to the Munich skyline.

Competition between the two spilled over from cars to buildings two years ago with the Zaha Hadid-designed extension to the BMW plant in Leipzig. A year later, Mercedes retaliated with a striking museum in Stuttgart, designed by UN Studio.

But this summer, when BMW World is completed, its owner will strike back. This will be no ordinary car showroom. For a start, it is massive – according to its designer Wolf Prix, co-founder of Austrian architect Coop Himmelb(l)au, its roof could cover St Mark’s square in Venice.

Second, it turns the car-buying experience into theatre. “People come here to collect their new car and then drive through the building to the street,” says Prix.

He’s underselling the experience somewhat. Inside the huge central area is a raised podium with a ramp that spirals down to ground level. Above the podium is a box cutting into the swooping roof. This is a reception area, where buyers wait as their new car receives its final polish on the podium below. The reception is connected to the podium by a smaller ramp that acts as a walkway.

“When their car is ready, they come out of the showroom,” says Prix. “They are very happy as they can see the object of their desire below. They go down to the walkway to their car and drive it away.”

Prix says this dramatic exit has made the building extremely complex. The plan is to unite 200 cars with their owners each day, so the cars will be stored in racks in the three-storey basement. German fire regulations demand that all these storage areas be oxygen-free.

But it is above ground that this complexity is most visible. “The building had to be dynamic and elegant like the car,” says Prix. Rather than following the language of car design, which dates very quickly, Prix turned to a signature of his practice – highly sculptural, cloudlike roof forms. Prix describes the roof gracing BMW World as an inverted landscape – flat on top but undulating below.

The undulations are not random but serve to differentiate the spaces. “It allows us to have sequences of spaces without having walls,” says Prix.

These demarcations are vital because the building is not just a collection point. BMW expects 850,000 people to visit each year to see the cars, go shopping, eat in the restaurants and even see a film.

The roof sweeps into the building’s architectural highlight: a double cone by the entrance that looks just like a tornado. Inside a ramp spirals around the cone, leaving a space in the middle that Prix describes as “the eye of the hurricane”. This will be used for events such as the launch of a new model – spectators will be able to watch from the spiral ramp.

The building is as much an engineering triumph as an architectural one. The 16,000m2 roof contains 2,000 tonnes of steel and consists of an upper and a lower skin made from a series of small steel members that follow the shape of the roof. These two skins are connected by a series of steel struts to form a truss with sufficient inherent rigidity to be supported by just 11 columns.

The cone is also constructed from a latticework of steel to form a space frame; this is clad in glass with some solid panels on the south side to act as a solar shade.

According to Prix, the building will be finished this summer, but he doesn’t know when it will open to the public. Apparently, BMW wants the opening to coincide with a vehicle launch. The company should make the most of this razzmatazz while it can. Pencils are almost certainly being sharpened over at the Mercedes HQ in Stuttgart …