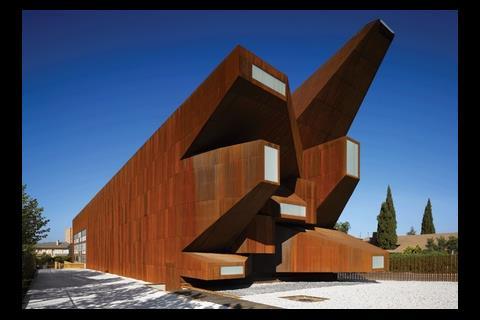 Spanish firm Vicens + Ramos is a reclusive practice, but this iconic/iconoclastic church in Madrid is hard to miss. 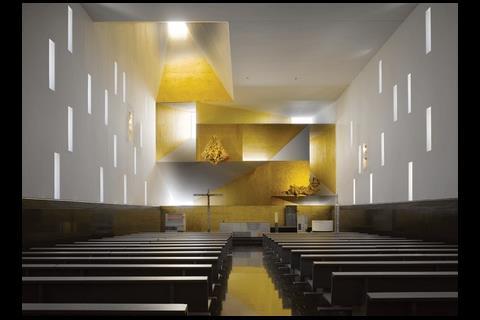 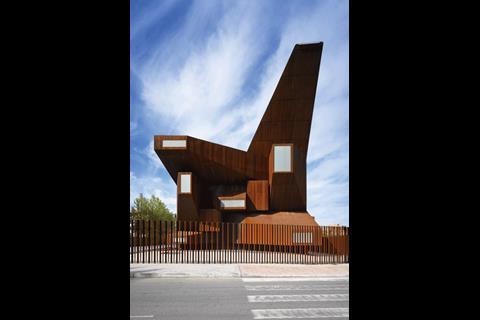 Vicens + Ramos describes the building as “an explosion”

Spanish firm Vicens + Ramos is a reclusive practice, but this iconic/iconoclastic church in Madrid is hard to miss

The Iglesia de Santa Monica in Madrid, designed by Spanish architect Vicens + Ramos, is a church unlike any other. Clad entirely in weathering steel, it resembles an expressionist war memorial more than a religious building.

The completed building was the third design that the architects came up with for the building. Original proposals for a more traditional church in concrete fell by the wayside as there were insufficient funds.

Vicens + Ramos’ solution was to shape the church to fit the awkwardly placed site and build it entirely from Corten steel with plasterboard panelling inside.

The building is long and narrow, curved to fit the road along its westerly aspect and cut off abruptly at the north-easterly face. Described by the architect as “an explosion, frozen in an instant after detonation”, the sculptural protuberances at the north end seem to jostle for the light, and almost resemble a hand pointing heavenwards.

Appropriately, this is the end of the church in which the altar sits. The windows, covered in mesh, form a disjointed pattern that resembles a cubist painting.

The architects asked five artists to create the interior fittings of the church, including the crosses, altar and decorative images, and each did so free of charge as the priests had no money to pay them.

Vicens + Ramos, which designs predominantly in a modernist style, prefers its clients and projects to remain secret even though it has been designing in Spain since the late seventies. Its buildings include a social sciences building at the University of Navarra and the Las Encinas house in Madrid.

Original print headline: 'The exploding church of the invisible architect'.