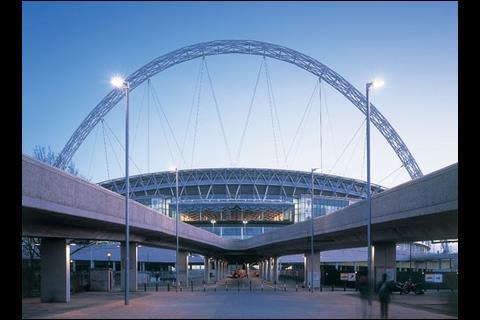 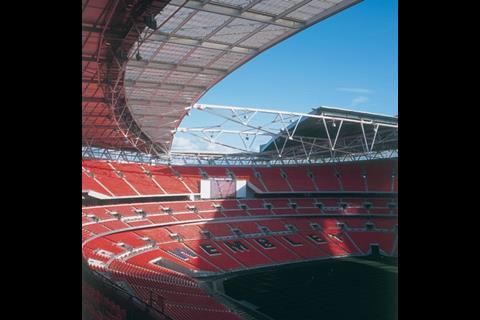 The roof keeps the 90,000 spectators dry during events. The arch directly supports the leading edge of the north side of the roof and trusses span across to support the south side. A perimeter truss supports the rear of the roof sections. The south, east and west sections of roof retract when the stadium is not in use to let light onto the pitch 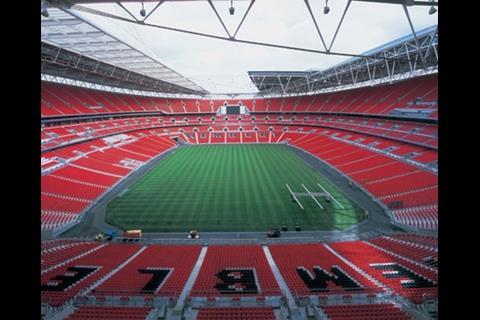 Seating is arranged in three tiers, the upper and lower are for the general public and the middle is for corporate seats. Speaker clusters suspended from the roof provide a plug-and-play sound system for rock concerts 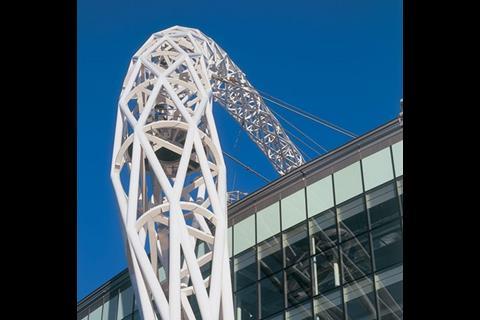 The arch straddles the stadium. 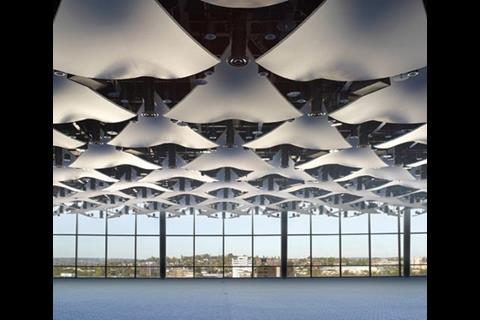 There are generous hospitality areas, although some of these can feel rather corporate and bland. 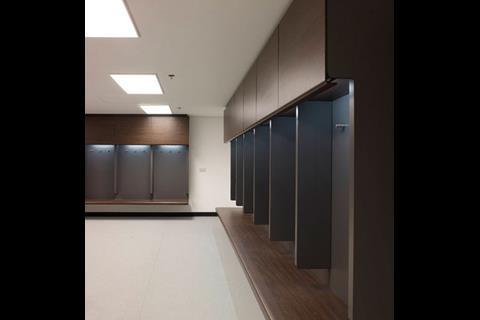 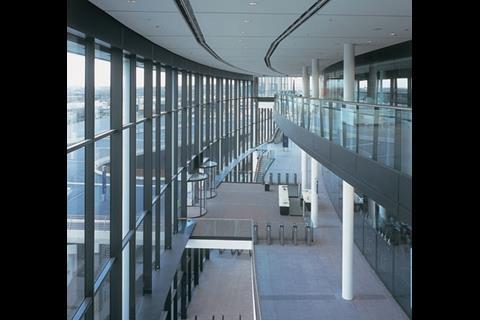 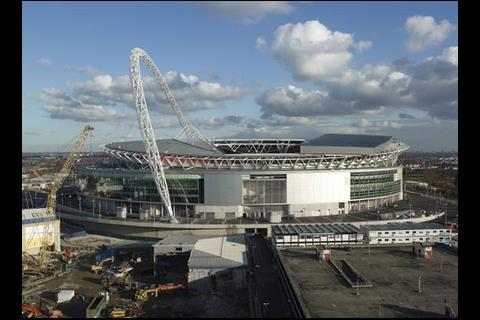 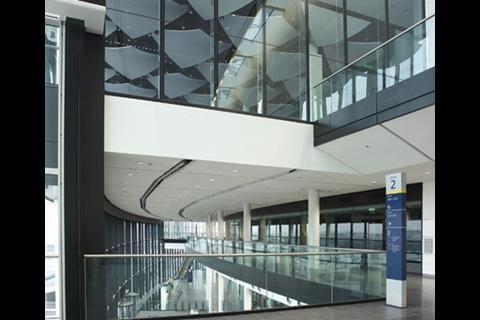 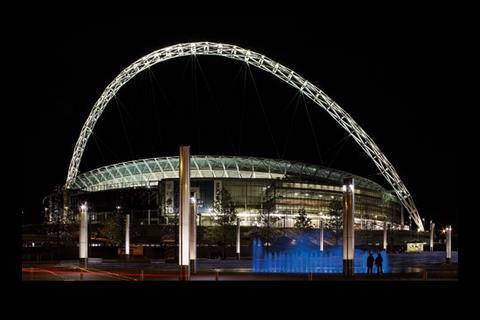 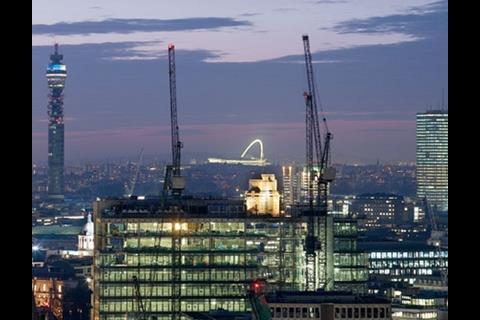 As we approach the final deadline for Wembley, it looks like Multiplex may be about to pull its shirt over its head and land a kneeling skid at the corner flag. But haven’t we heard that somewhere before?

The day that Multiplex has been working towards since 2002 is finally in sight. After many false dawns, it looks as though the glorious day of practical completion is about to arrive. This is the day that the national stadium at Wembley is handed over to its client, and its builder can stretch its back, take a deep breath and apply itself to the rest of its lawsuits.

As those of you blessed with either long memories or access to the Building archive will know, the stadium was to have been handed over at Christmas 2005, then March 2006, then September 2006. Now it looks like the pass will be made in a matter of weeks.

When Building took a tour a week last Thursday, the stadium certainly looked finished. Crockery for 13,000 people is being unpacked, the pitch is being lovingly caressed with brushes and small lawnmowers to ensure it is perfect for the first match, and paint is being dabbed on the odd bit of filler.

Indeed Multiplex is probably spending more time these days with M&E firm Honeywell in the High Court, while Honeywell is still very much on site, working on what is probably one of the most risky elements of the project – making sure the fire alarm system works. But because this work is largely invisible, what we see now is the same as the public will when the stadium opens. So has the long wait been worth it? And will the stadium definitely be ready for the cup final on 19 May?

Most people’s first view of the stadium will be from the revamped Wembley Park tube station. As before, they will then walk along Olympic Way past the shabby information booths and hamburger sellers. But instead of the twin towers, they will be moving perpendicular to the stadium’s 133m-high arch, which towers over the flotsam below.

Foster + Partners has orientated the stadium so the arch leans towards the Olympic Way to maximise the sense of arrival. Deviate off the main drag and you can appreciate the visual and technical qualities of the arch. In typical Foster style, architecture and engineering are blended – the leaning arch and the cables connecting it to the roof look like someone leaning backwards as they take the strain in a tug of war.

But back to the grand approach. Below the arch, the circular building is largely clad in glass. From a distance, this element of the stadium has a similar feel to Arsenal’s Emirates stadium in Highbury, north London. The difference is that the Emirates is much lower owing to planning restrictions and because it caters for 60,000 rather than 90,000 spectators, it is inevitably scaled down compared with Wembley.

At the end of Olympic Way there is a blast from the past as you go up the old, raised concrete pedway (which will eventually be replaced) into the stadium.

Inside, the most impressive thing about the business end of the stadium is the bowl. This is vast, as it has to accommodate 90,000 people which it does by being very high. The seating is arranged in three tiers, with the public positioned in the upper and lower levels. The middle level is reserved for the corporate boxes.

Internally, the roof is less dramatic. The arch is only visible on the south side, and there is no real sense of how the structure functions. In fact, the arch directly supports the front edge of the northern roof section and trusses at each end span across to support the front edge of the south side. The rear of the roof sections is supported by a perimeter truss that rings the stadium. Internally the roof is the main element, not surprising given that Wembley will be the largest stadium in the world that promises to keep spectators dry. It completely covers the stands but retracts when the stadium is not being used, to get as much light as possible onto the pitch. The south, west and east sections retract but the north section of roof is fixed.

The ground will also function as a stadium rock venue, so acoustics were an important part of the design. The idea is that bands turn up and plug straight into the carefully engineered sound system without having to set up their own equipment. Sound is dispensed through 54 clusters of speakers suspended from the roof. During our visit we were treated to a Robbie Williams CD to demonstrate the effectiveness of the acoustics. This was played at 45% of the maximum volume, and was loud enough. There was some reverberation consistent with being in a large stadium, but this didn’t detract from sound quality and gave the sense of being in a large space. Indeed, a lot of thought has gone into the acoustics, for example the glass fronts of the boxes are angled to break up sound reflection. Whether the Wembley roar has been preserved remains to be heard.

Inside the stadium are a million square feet of restaurants, bars, corporate boxes, toilets and connecting corridors. Two atriums situated at the northern and southern ends of the building are the most impressive spaces, as these span the full height of the stadium and afford dramatic views.

The Queen has her own entertaining area in a black and windowless inside bar, which has one purple wall, making it feel rather like a nightclub. The purple is made up of 3D diamonds, which are one of the recurrent decorative features of the hospitality areas. The diamonds repeat in other areas but are treated differently, for example some are gloss-black or even chrome.

Miles of grey carpet and white painted corridors link these elements together. It is smart, corporate and bland, but if it helps 90,000 people concentrate on what they have really come for, then the stadium can be judged a success.

Will it be ready in time?

The stadium may look finished, but whether it opens on time is largely up to a team of people with notebook computers. According to Ashley Muldoon, Multiplex’s project director, Honeywell has yet to finish testing the fire alarms.

Fifteen scenarios have to be tested. “That’s been a bit of a challenge in terms of getting Honeywell across the line,” he says, with a hint of understatement.

Once that is done, all the systems have to be checked to ensure they integrate with each other. This includes power supply, fire alarms, air-conditioning and the public address system. They have to be able to cope with six scenarios, for example a loss of power. If this happens, the systems have to preserve power for critical systems.

Integrating systems is difficult. BAA is allowing more than a year to integrate Terminal 5. Admittedly a terminal is a complex beast, but Wembley is not exactly simple.

The final hurdle is a fault-free 24-hour long test. Muldoon describes this as being for the benefit of WNSL. “It’s really a comfort zone for them to take control of the stadium.” Once this is complete Multiplex has achieved practical completion and further delays will be down to WNSL.

WNSL will need a general safety certificate before the stadium is fully operational. It is already working towards this, for example it has carried out exercises with 1,500 stewards evacuating the stadium. WNSL will also hold a series of “ramp up” events to see if the stadium functions properly with increasing numbers of people.

Multiplex has a history of predicting that the programme is on schedule when in fact it is suffering serious delays. But this time, providing nothing goes badly wrong, they should do it.

If any individual has become associated with Wembley, it is Ashley Muldoon, Multiplex’s project director. He has come to be seen as the hard man of Wembley, partly owing to his shaven-head and partly owing to the way Multiplex has donned the legal boxing gloves when things go wrong.

Unsurprisingly, he says he will be relieved when it is finished. On the construction side, he says the roof was the toughest job. “It’s complex and the tolerances are tight. Once you started to de-prop it the question was, is the geometry right? Putting it all together involved a lot of technical work.”

But the biggest challenge was just finishing the job.“There were a couple of rough relationships. These may continue after the job, but at the same time there were a lot of very good relationships.”

Would he do it differently next time? “In terms of the team and the way we managed this I don’t have any regrets about it,” he says. “It’s regretful that we lost money.”

Next, he is to work on some residential schemes in London. This may be tame stuff by comparison – but that might not be a bad thing.

For the full strife-torn history of the national stadium, log on to www.building.co.uk/archive