The grade II-listed Great Arthur House in the City of London urgently needed a new facade that stopped its leaks and improved its thermal performance, but double glazing was too heavy for its structure. Thomas Lane found out how the project team came up with a solution that retains its distinctive appearance 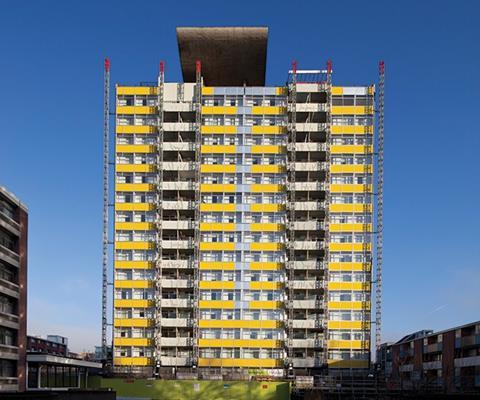 The new facade; the team created a thermally broken extrusion 119mm wide with the glazing fixed in with structural silicone.

One of the most distinctive features of Great Arthur House is the elegant glazing system characterised by the combination of impossibly thin framing and bright yellow panels. Located on the Golden Lane Estate in the City of London, it was one of the earliest local authority tower blocks when completed in 1957, and at 15 storeys was briefly the tallest residential building in the country.

It was one of the first buildings designed by Chamberlin, Powell & Bon, who went on to design the neighbouring Barbican. Other distinctive features include the concrete canopy topping the building and an innovative sliding partitioning system separating living and bedroom for greater flexibility. Unsurprisingly, it is grade II-listed.

Like the partitions, the windows slide rather than pivot open. These were made by a Wandsworth-based company called Quicktho which also made windows for the original Routemaster bus. Like the bus, the single-glazed windows feature a top hung pivoting light above the sliding panes. The glass is framed in aluminium with the glazing bars just 80mm wide, which gives the building its streamlined, elegant appearance. After nearly 60 years, the cladding needed replacing and upgrading. 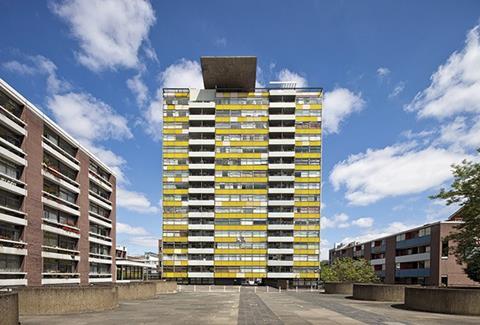 Great Arthur House before the alterations had begun

“We were faced with a cocktail of how we could reclad the building so it didn’t leak, improve the thermal performance and meet the grade II-listing requirements,” explains John Robertson, director of John Robertson Architects. “The more we looked at it the more challenging it became. The frame extrusions are phenomenally thin which made putting in double glazing very challenging as it’s double the weight. We had to do all this with the residents in situ.”

Leaks were a particular bugbear of residents. “We found two flats with guttering on the inside,” says Wayne Salter, senior site manager for contractor Keepmoat. In many instances the bright yellow glass panels had been replaced by plywood sheet painted in the wrong colours and this had started to rot. Investigations revealed the curtain wall was essentially a set of windows attached to teak bearers cast into the concrete frame with woodscrews. “It was pretty rudimentary,” says Robertson. Water ingress meant the teak bearers had rotted so badly it was a miracle the cladding hadn’t started falling off the building.

Robertson brought in consultant Mott MacDonald and Austrian cladding specialist Fill Metallbau to come up with a solution that would satisfy the heritage bodies, residents and client. “We did a huge amount of work with the residents, English Heritage, the City planners and the Twentieth Century Society,” says Robertson. “They had to be persuaded the new curtain wall would be visually as good as the original.” 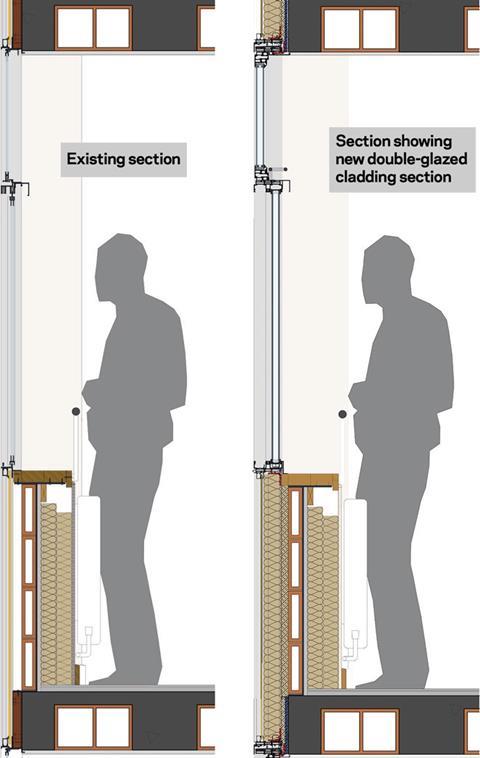 After a lot of work, the team came up with a thermally broken extrusion 119mm wide with the glazing fixed in with structural silicone. German cladding giant Schüco added its experience of sliding window systems and tested the system. Tests revealed wind-driven rain was a problem because the window gutter locating the sliding section flooded. The solution was to fit non-return valves to the channel drainage to prevent water being driven upwards into the gutter by strong winds. Glass manufacturer Pilkington recreated the muro glass panels in the original sunflower yellow colour. A mock-up was built on one end of Great Arthur House so stakeholders could compare new against old. “We did this as a final check before committing to millions of pounds worth of extrusions,” says Robertson.

Investigations had also revealed the floor slabs featured hollow terracotta pot infill which meant there was no spare capacity to take the additional weight of the double-glazed curtain walling system. Luckily there was plenty of capacity in the shear walls separating the flats, providing a way could be found to span up to 6m between the walls. The solution was to place a 12mm-thick galvanised steel plate in front of the floor slabs, which acts as a structural beam supporting the cladding.

The installation has been done by Keepmoat. The first step involved putting up a temporary wall inside each flat in front of the windows to enable the old system to be taken out while the flat was in occupation. Keepmoat came up with a reusable solution consisting of structurally insulated panels complete with integral windows. The 1,200mm high by 900mm wide panels could be slotted together to form an airtight wall. 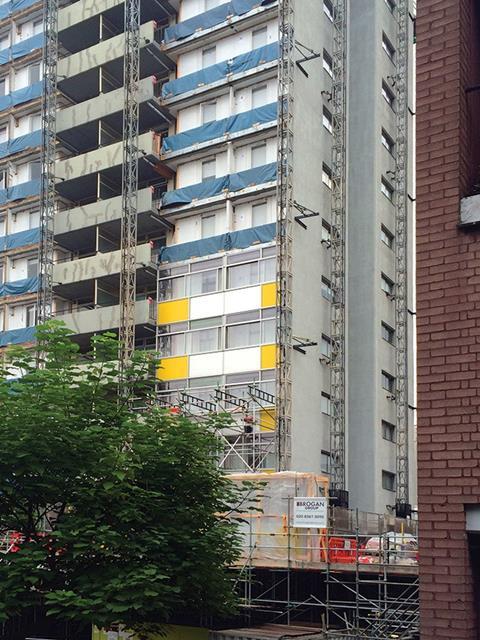 A mast climbing system with mobile platforms has been used to install the unitised cladding panels from the outside. The gap between the floor slab and steel beam was filled with grout and the panels attached to the beam. The coloured glass was put in once the panels were in place to reduce the risk of breakage. Insulation batts were put into the gap between the new cladding and upstand below the window. With the cladding in place, the temporary wall could be taken down inside the flat.

The west elevation completes in March. It replicates the original perfectly, with the added bonus of 31% better thermal performance, 13% lower carbon emissions and modern niceties including restrictor catches to limit how far the windows can be opened. Work is due to start on the east elevation with the £5.8m job to complete by July 2017. This job assures the future of Great Arthur House as a distinctive feature of the City of London for at least another 50 years. 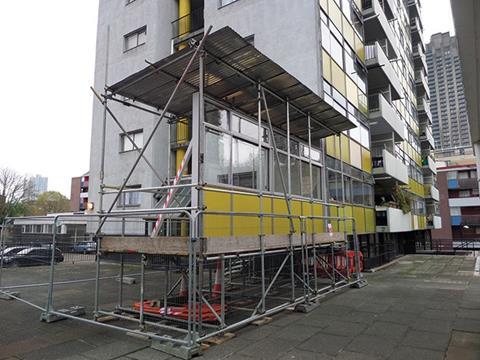