In at the sharp end 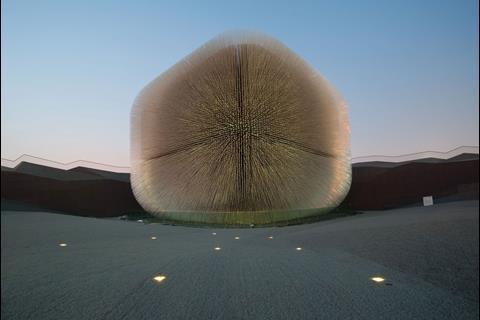 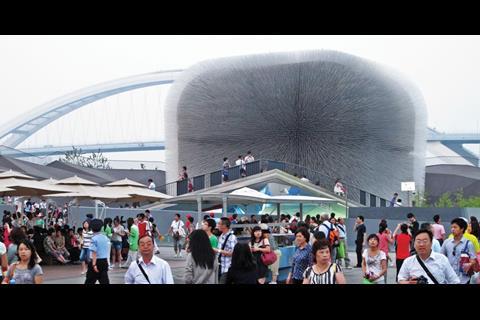 The pavilion is one of the most popular at the Expo, with more than 50,000 visitors a day 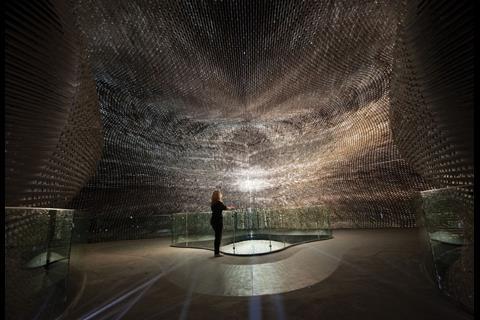 The interior is illuminated by the daylight that filters in through the 60,686 acrylic rods 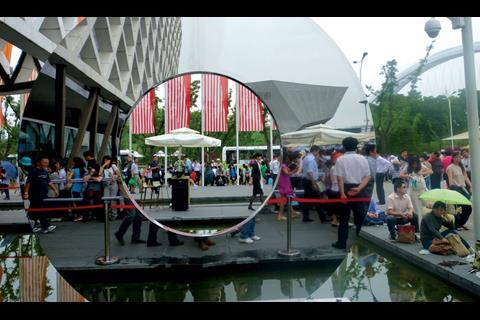 The 60,686 acrylic spikes on Heatherwick Studio’s British pavilion have been the talk of the Shanghai Expo, as Stephen Kennett found out when he paid a visit. But how on earth was it all put together?

How many times have you seen photographs of the British pavilion for this year’s Shanghai Expo and had to look again to make sure they are not computer generated? In the flesh, amid the 200 or more pavilions all jostling for attention on the vast Expo site, it’s no less dramatic. When the thousands of acrylic fronds get caught in the breeze, it becomes almost hypnotising.

And, as one of the most talked about and visited of all pavilions at the event - and having just last week scooped the Lubetkin prize - it seems to be living up to its task, which is to alter the way the Chinese perceive Britain. Research shows that we’re seen as a country of tradition and stability, which is no bad thing, says John McManus of the Foreign Office. But as the Chinese economy motors on through the downturn, this isn’t enough. “We’re not seen as exciting or good at design or forward thinking.”

Keen to drive home the message that there’s more to Britain than beefeaters and red telephone boxes, the British government has pulled out all the stops. The focal point of its £26m investment is the Heatherwick Studio-designed pavilion.

Katerina Dionysopoulou, architect on the scheme, says visitors to expos tend to either remember the building or the exhibition inside. “We wanted to combine the two.”

What it came up with was a 20m-high cube-like structure pierced by 60,686 acrylic spikes. Each spike is embedded with a selection of hand-picked seeds sourced from the Kunming Institute of Botany, a partner in Kew Royal Botanic Gardens’ Millennium Seed Bank Project. During the day these spikes work like optical fibres bringing light into the interior, while at night tiny LEDs shine along them, making the whole structure glow.

Coming up with the concept though was the easy bit. Some way had to be found of getting it built. The project was delivered as a design and build and the task of project managing it all fell to Mace. This, though, is far from your typical project management job (indeed last week Mace won an award at the CIOB Global Construction Summit in Shanghai for “oustanding achievement in construction management”). “Because of the complexity of the project and the different ways of working in China we’ve had to take a very hands-on approach,” says Mark Tranter, associate director. “We were working around the clock and through the holidays to deliver it.”

Because it was being constructed in China, Mace had to first bring on board a local technical institute to translate the UK design so that it complied with local regulations and the requirements set down by the Expo organisers. It then had to appoint a main contractor to deliver it.

No-one had constructed a building pierced with tens of thousands of acrylic spikes before and as well as finding a way of constructing it, with a relatively unskilled workforce, there was also the small matter of finding manufacturers to deliver the 1.2 million components needed to make the spikes, many of which had to be hand made.

Obviously none of the Chinese had worked on a spiky pavilion before, so we had to make planning tools that were understandable

Unlike most design-and-build projects, Heatherwick Studio worked closely with Mace and the Suzhong Construction Group throughout the construction phase, providing detail design input - of which there was plenty. The spikes themselves are made out of 7.5m-long acrylic extrusions. On the end that protrudes into the pavilion is a 400mm-long section that was made separately and contains the seeds. These were cast in a mould and then sanded and polished by hand before being adhered to the extrusion. All this work had to be done in China because of the volumes required.

Although the spikes are designed to sway in a breeze, the pavilion needs to be able to withstand a typhoon. So a 25mm-diameter, 5.7m-long aluminium tube was first slid over each acrylic rod. Another 3.2m-long section on top of that allows the spikes to move but gives them enough strength to avoid snapping. Before manufacturing could begin, the spikes underwent rigorous testing and bespoke components had to bedeveloped to create a watertight seal where acrylic and aluminium sections meet.

The cube itself is constructed from a laminated veneer lumber (LVL) skeleton onto which four layers of plywood are fixed - two on the outer face and two on the inner, through which the spikes penetrate.

The LVL was shipped in from north America in 15m-long, 1.2m-deep planks cut and machined to fit exactly in the gap between the spikes. A total of 242,744 holes had to be precisely positioned and aligned through the plywood sheets so that the spikes would follow the form of the structure.

“When they arrived on site the whole pavilion was put together like a jigsaw. The tolerances are basically next to nothing and you couldn’t allow sheets to creep or anything like that as it’s not practical to go back and change things once you’ve starting installing the spikes,” says Tranter.

When it came to installing the spikes the sequence was essential. Start in the wrong place and you could find yourself trapped in a forest of 8m acrylic wands with no way out.

“Obviously none of the Chinese had worked on a spiky pavilion before, so we had to make planning tools that were understandable and decipherable on site. We set up simple drawings with details of each of the work faces, showing what they needed to achieve in a day and the sequence.”

The starting point was the roof. A gang of workers would start by threading the spikes from the inside to the outside, careful not to impale the person on the receiving end. As the spike emerged, a clamp was slipped over the end, which provides the main fixing to the structure. As Tranter explains, it wasn’t possible to drill into the aluminium tube as it would weaken the fatigue strength. Once the clamp was in place a rubber cowl was slid over the top and adhered to the plywood to provide a waterproof seal.

Meanwhile, a team on the inside was marking out precisely the distance each spike protrudes into the space and attaching safety fixings to each spike - a small hook-like device that would prevent it falling should the fitting on the outside fail. There was also an LED to install and test before the team could move on to the next one.

One programme-critical activity, however, was the waterproofing. “Because we had a liquid-applied membrane on the outside, this had to cure before you put on the next layer. You couldn’t just keep going on with the spikes, otherwise you couldn’t reach these areas,” says Tranter.

About 300 spikes were being installed in a 10-hour shift. But because it was winter and temperatures plummeted to -10ºC, another 38 hours had to be added for the waterproofing to be applied, cured and tested so any leaks could be plugged before moving on. The last spike was installed by the then British foreign secretary, David Miliband, in March 2009. Then it was on with the fit-out work.

So what happens next? Only five of the pavilions have been designed as permanent structures and after the event closes in October most will be demolished and recycled. Only the UAE has designed theirs to be demountable so that it can be shipped home and reused. The idea is that the spikes from the so-called “Seed Cathedral” will be distributed with educational packs to schools across China. The structure has even been nicknamed the “dandelion”, to reflect seeds being blown across the country.

However, McManus says that in the past few weeks, and with its popularity soaring, expressions of interest have been put forward by both Chinese and British organisations keen to buy the pavilion and reconstruct it. Although this would seem like an attractive idea, the structure was designed with a six-month service life in mind.

“We are beginning to look at the intellectual properties and legal side of it. But our preliminary advice on the design life is that you would essentially be building a new one,” says McManus.

If that’s the case, Tranter might find his services being called on once again.

From the elevated highway that runs next to the Huangpu river, the full spectacle that is the Shanghai 2010 Expo unfolds. Aside from the 200-plus pavilions - whose designs range from the oriental crown structure of the Chinese to a wacky rabbit-shaped building - what’s most striking is the scale. And not just of the exhibition ground; the surrounding coach parks stretch for miles, and all of them are full.

Shanghai 2010 is a big deal for the Chinese.

For most of us, these events slip by, with the occasional exception such as Montreal in 1967 or Seville in 1992. But China, keen to show the world what an emerging superpower can do, has dug deep. It’s spent twice what it did on the Beijing Olympics to create an exhibition that covers an area 20 times the size of the last Expo - held in Aichi, Japan.

By October it’s expected that 70 million people will have come through the turnstiles and, judging by the queues, these estimates are well on target. About 400,000 people are visiting daily.

So who are all these visitors? For local Shanghainese, the entry price is within reach, which assures it as a local attraction, but a large chunk of the visitors are being bussed in for free from across the countryside. For some factory workers it’s a reward for hitting production targets.

And there are plenty of photo opportunities for the descending masses, from the woven willow-clad Spanish pavilion to the geometric knot of the Danish structure. The queues for getting into the more popular pavilions seem endless. Inside the French pavilion it’s a jostle to keep up with the flow of people who pay only cursory attention to the clichéd images of France projected onto the walls. As one visitor put it, you have to understand the Chinese mentality - they want to say they’ve been there and to have a ticket to prove it.

But there’s also genuine interest and curiosity at seeing things that are different and new. As the Foreign Office’s John McManus says, a lot of Chinese aren’t able to travel abroad, so the Expo gives them a way to see the world.

It’s also been heavily marketed. Shanghai locals began talking about it two years ago, perhaps keen to restore some civic pride after the world-wide attention grabbed by Beijing for the Olympics.

But Expos aren’t really about the general public. McManus says much of it is to do with soft diplomacy, and so far the British pavilion has scored well, attracting visiting VIPs in large numbers - people who could ultimately benefit UK exporters.

What the Chinese perhaps didn’t appreciate is that Expos these days create little interest outside the host country. And despite huge numbers of visitors it’s unlikely to rank as a world event on a par with the Olympics.