London City Cruise Port: In at the deep end

Greenwich looks set to be home to a cruise ship terminal big enough to compete with New York’s and Sydney’s and which will be part of a much larger commercial and residential development. But its relatively shallow, narrow river setting makes the project an ambitious undertaking 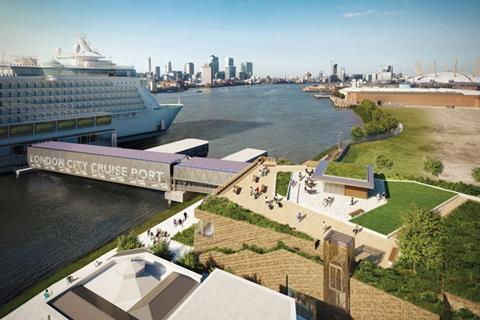 London has been without a cruise ship terminal since the closure of the Royal Docks in 1981. Ironically, had it managed to stay open for just a few more years, it might well have been buoyed by the regeneration that swept the Isle of Dogs in the 1980s and survived. But as things stand, for the past 34 years one of the world’s great maritime cities has been without a major cruise ship port.

The situation has been partially appeased by the presence of two small moorings at Greenwich and Tower Bridge. But these are inappropriate for all but the smallest cruise ships – voyagers at Greenwich must first ensure the humbling experience of boarding or disembarking by launch. At present, London’s only purpose-built, deep water cruise ship terminal is at Tilbury in Essex, 22 nautical miles away from central London.

But this is all set to change. Back in July the planning board at the Royal Borough of Greenwich approved plans for a multimillion-pound cruise ship terminal to be built at the disused Enderby Wharf on Greenwich Peninsula. Last month the mayor of London also added his consent to the scheme, which now means that the development could be fully operational within as little as two years.

The tourism and regeneration benefits of such a development are obvious. There is a clear appeal in offering tourists the opportunity to begin or end their cruise near the heart of the world’s most visited city and within walking distance of the multiple attractions of royal and maritime Greenwich, one of London’s four Unesco World Heritage sites.

The terminal also once again enables London to accommodate large cruise ships and thereby compete with other global cruise ship destinations such as New York, Sydney and Venice. And the local authority maintains that it would further add to the millions of tourists the borough receives every year who bring about £1.1bn to the local economy and support 16,000 jobs.

Moreover, the development extends the tide of regeneration that has been permeating across the post-industrial riverside wastelands of east and south-east London for the past two decades. Greenwich has the longest riverside of any London borough and with the nearby O2 arena and Greenwich Peninsula, already offers examples of often residentially-led redevelopment schemes along the Thames.

Accordingly, as well as offering the cruise terminal, the London City Cruise Port, or LCCP as it is to be known, will be incorporated into a much larger scheme, all of which will be jointly developed by Westcourt Real Estate. This will also provide a skills and training academy, restaurants, cafes, bars and public spaces surrounded by 1,154 new homes situated in a series of mid to high-rise mixed-use blocks.

The current application is an extensively amended version of previous proposals which had already received consent in 2012. The most significant change is the upgrade from a “turnaround” port (where passengers pass through on the way to other destinations) to a full terminus from which passengers can start or end their cruises.

Other changes are the removal of proposals to build a hotel on the site (prompted by growing passenger preference to remain berthed onboard ships while docked at port and the spike in Greenwich hotel construction as a result of the Olympic Games) and improved public realm, enhanced terminal facilities and increased residential accommodation. 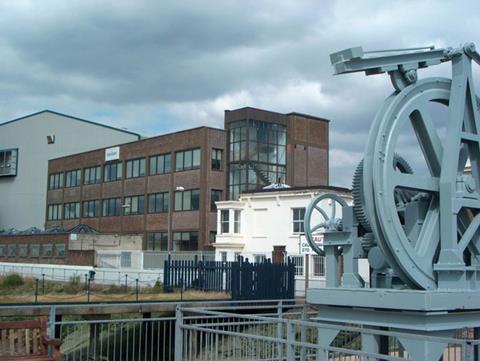 Enderby Wharf as it is now

But it is not just the extent of associated commercial development that makes the current LCCP plans unique. Most large cruise ship terminals are situated in ports or harbours where there is adequate space for accommodating and turning the enormous vessels they serve. But LCCP will be situated on a relatively congested and comparatively narrow urban river in a dense, primarily residential part of the city very close to multiple historic and commercial centres.

This is in stark contrast to conventional cruise ship facilities in cities such as Rotterdam and Southampton where terminals straddle large, open ports facing onto broad seaways. Venice is perhaps the closest contextual comparison to LCCP but even here the port is situated away from the historic city on a sprawling industrial site located beside the gigantic Marittima basin.

This contextual limitation has imposed certain restrictions on LCCP’s design. Most significantly, the port will only be able to accommodate mid-rise cruise ships up to a maximum length of 230m and with a maximum passenger capacity of 1,600. While this would easily serve a high proportion of international cruising fleets, it would be insufficient for iconic liners such as the mothballed QE2 (294m) and the world’s largest cruise ship Oasis of the Seas (362m), ships that would continue to prioritise the much larger Tilbury and Southampton ports.

Another limitation on the size of ships LCCP will be able to serve is the width of the Thames. The river at Enderby Wharf is approximately 350m wide, broad for a continuous urban context but narrower than the length of Oasis of the Seas. As ships will be turning at the new London port, size was limited to those ships that could comfortably turn within the breadth of the river.

The final physical limitation presented by the Thames is its relatively shallow depth. In order to accommodate huge vessels, cruise ship terminals are often located in deep water locations, as is the case at Tilbury. This does not apply to the Thames at Greenwich.

While the depth of the Thames varies significantly along its course, at Greenwich it is approximately seven to eight metres, negligible in cruise ship terms, and even lower at the shorelines. When the vast 115,000 tonne Gudrun Maersk mega-container ship berthed at the new London Gateway port in Thurrock last January, it was only possible due to a prolonged dredging programme that had deepened the estuary by removing 27 million cubic metres of silt from its riverbed.

This limitation has had a significant impact on the layout of the terminal site. While the new terminal building will be located on the shore, ships cannot dock directly beside it as they will need to remain in the deepest, central part of the river. Therefore a covered glass gangway will connect the terminal and its passengers to a large floating pontoon near the centre of the river where ships will remain docked. While realised on a much bigger scale, the format will essentially be the same as several of the piers already dotted along the river’s edge. 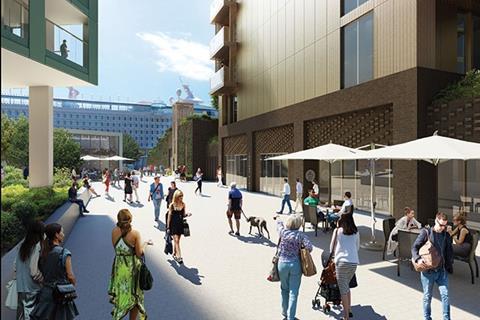 Opposition to noise, pollution and congestion

But there is another advantage presented by having ships dock in the centre rather than the bank of the river. Noise, privacy and pollution have been three of the four most contentious objections that opponents of the scheme have raised. The fourth, congestion, is centred on concerns about the additional congestion caused on roads and public transport as a result of the development.

While docking the ships in the middle of the river will have no impact on congestion, it might help abate the other three issues. The other side of the river opposite Endersby Wharf is lined by hundreds of riverside flats on the Isle of Dogs. Tower Hamlets, within whose remit this area lies, has raised concerns about privacy afforded to flats by having what are essentially floating multi-storey hotels docked right beside them.

There have also been concerns from residents on both sides of the river about the noise and air pollution generated by ship engines of this size. Many highlighted EU directives that recommend that ports adopt a shore-side power supply to enable vessels to turn off their engines while docked, measures that have not been incorporated at LCCP.

It is issues such as these that forced Venice to take the highly controversial step of banning all large cruise ships (over 96,000 tonnes) from its port in 2012 over pollution, safety and structural fears surrounding the city’s fragile, water-bound historic buildings. The ban was reversed to similar controversy earlier this year and even though cruise companies surprisingly elected to voluntarily maintain it, its reversal is itself now the subject of a prolonged and fractious appeal.

The Greenwich Society remains one of the staunchest opponents of the scheme in its present form and called on the council to refuse the proposals. Their opposition is based on six main grounds: pollution, excessive density, excessive building height, lack of affordable housing, lack of family dwellings and insufficient open space.

Arguably, pollution remains the most contentious issue with the society and they criticise the decision not to provide shore-based power, as they suggest is the case in ports from “Los Angeles to New York to Amsterdam”. They also point out that according to the developer’s own report, mid-size cruise ships such as those to be docked at LCCP “consume around 700 litres of heavy diesel fuel per hour – equivalent to 400 idling HGVs 24 hours per day”. Coupled with pollution from the nearby Blackwell Tunnel, chairman Richard Baglin claims that the port will have “a devastating effect on air quality on the Greenwich Peninsula” and that local residents are “deeply concerned about the new development”.

But there is one comparable terminal elsewhere that might hold clues as to what may be in store at Greenwich. As Simon Rawlinson, head of strategic research at consultant Arcadis, points out: “The high tech new terminal at Kowloon, built on the site of the old airport has transformed Hong Kong’s position as a cruise destination, with ships docking in the harbour bay rather than in the industrial port. This demonstrates the benefit of taking the cruise ships away from legacy ports such as Tilbury.”

But Rawlinson sounds a note of caution regarding supporting infrastructure that chimes with some of the concerns raised by residents. “The Kowloon Cruise Terminal has been completed ahead of the redevelopment of that part of Kowloon and as a result, doesn’t have all of the desirable supporting infrastructure immediately in the vicinity. The integration of the Greenwich plans into the wider peninsula masterplan must ensure that the new terminal has all necessary infrastructure to position it as a valuable destination if it is to meet full potential.”

Such concerns encapsulate the problems that can arise when large infrastructure clashes with historic and residential context. Should the LCCP be able to overcome the environmental, infrastructure and quality of life reservations expressed by some, then hopefully it will one day make a positive contribution to local regeneration, as well as London’s wider tourist and architectural appeal.