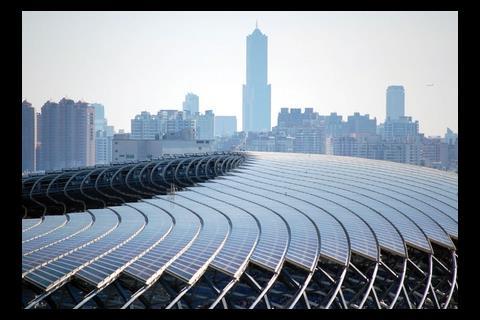 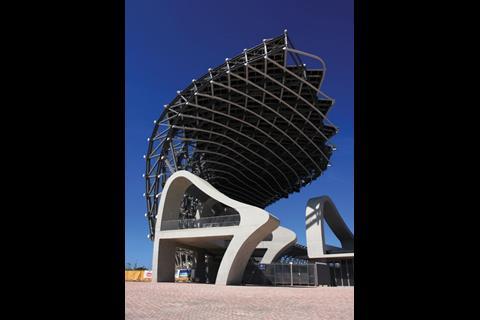 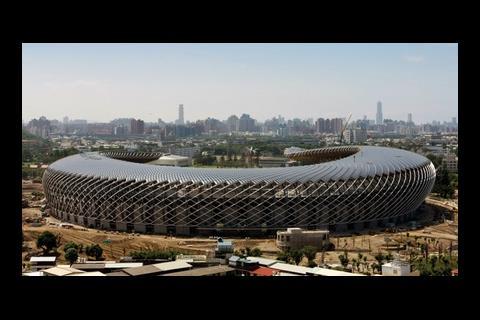 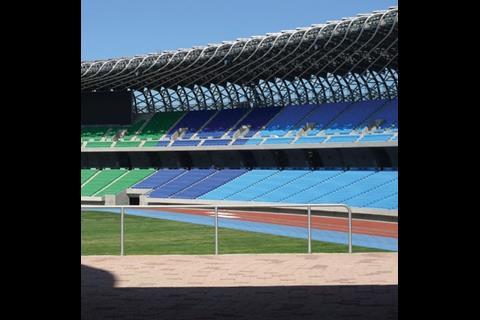 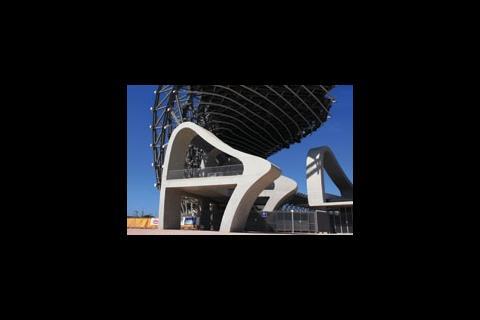 Could this be the greenest stadium in the world? Japanese architect Toyo Ito’s Kaohsiung stadium in Taiwan is entirely powered by solar energy from the 8,800 photovoltaic panels on its roof. Covering 13,000m2, or just over half of the building’s roof space, the solar panels can generate 1MW per hour, or more than a gigawatt a year. That’s enough to power both the stadium and a significant amount of the surrounding housing and infrastructure.

The $150m (£91m) stadium has been built for the 2009 World Games, an international event for sports that are not included in the Olympic Games, such as rugby sevens and the tug of war.

As well as winning points for sustainability, it is also a beautiful feat of sports architecture. The roof is made of helical-shaped steel pipes, supported on 159 structural trusses, curving round a rough semi-circle and resembling a sinuous snake from a distance.

It is only close up that the elegant engineering of the curved trusses and vaulting steel spirals can be admired.

Unlike most sports stadiums, the 40,000-seat World Games venue is open at the south end rather than forming an enclosed bowl. Ito designed it so that visitors arriving at the site from public transport could see inside the stadium as they approached, giving it an openness lacking in other arenas. This also allows the stadium to be used as an urban park on days when no sporting events are on, meaning it is unlikely to become a white elephant when the 2009 World Games are over.

It’s tempting to see Ito’s stadium as a little sister to Herzog & de Meuron’s Bird’s Nest in Beijing. It is intended as an architectural landmark for the city of Kaohsiung in Taiwan, just as the Swiss architect’s stadium is in China’s capital. However, its symbolic intentions are entirely different. Where the fortress-like Bird’s Nest is meant to stand as a symbol of China’s ascendancy , the subtler World Games stadium represents Taiwanese innovation in manufacturing and, in its open-ended design, the transparency that China lacks.

It could also be argued that the 42,000 tonnes of steel used to build the Bird’s Nest show scant regard to the environment, whereas the Kaohsiung stadium celebrates sustainable design with its astonishing power-generating roof, which saves up to 620 tonnes of carbon dioxide a year.