When it’s finished, Goldsmith Street in Norwich will be the largest Passivhaus scheme in the UK - but built as a 100% social housing scheme, it had to be delivered for a competitive price. But how is it being achieved? 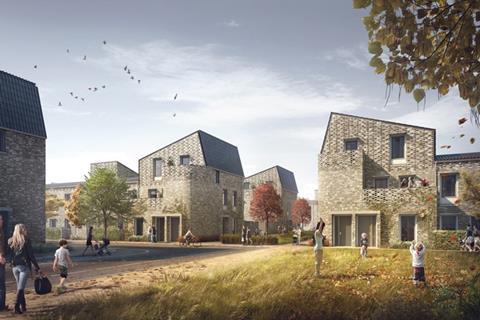 Goldsmith Street in Norwich is the biggest certified Passivhaus scheme in the UK. Providing 105 homes in a part of the city close to the historic centre but ravaged by insensitive and unpopular post-war redevelopment, the scheme aims to deliver urban regeneration as well as exemplar sustainable homes. Designed by Mikhail Riches Architects, construction has begun and the project is expected to complete next summer. But while the national benchmark set by the scheme in terms of scale is impressive, what really identifies the project as remarkable is another key statistic: the development is 100% social rent.

In Britain’s constricted housing market social housing is hard enough to achieve in the first place. But to tally this ambition with Passivhaus on a scheme of this size is a rare achievement. And coming in at just under £1,350/m², it is clear the project is being delivered competitively and economically, not traits always necessarily associated with Passivhaus adoption.

We of course are now familiar with Passivhaus being applied to private housing and smaller groups of affordable housing. Maccreanor Lavington Architects has recently completed the first Passivhaus townhouses in London’s Zone 1 as part of Lendlease’s massive regeneration of Elephant and Castle. While these homes push the boundaries with regard to the application of Passivhaus principles to the historic London terrace template, located on the edge of expensive central London, these are of course private homes with price tags to match. 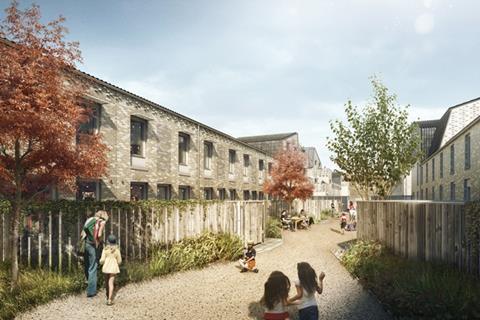 Goldsmith is the largest Passivhaus scheme to date with 105 homes. The traditional street layout helps integrate the scheme with an enclave of nearby Victorian terraced housing

Additionally, six years ago the first Passivhaus certified, rural, affordable housing development in the UK completed at Wimbish in Essex. Wimbish’s landmark status is undeniable and it set precedents from which many future schemes, both private and affordable, have learnt. But consisting of only six flats and eight houses and with a build cost of £1,500/m², Wimbush too conformed to the pre-Goldsmith perception that it was difficult if not impossible to achieve Passivhaus competitively and at scale on affordable urban housing.

Goldsmith Street has set about to change these assumptions. Not only has it done so in an urban context but it has also achieved a high density of 83 dwellings per hectare and delivered an aesthetic language and layout that seeks to reintegrate a forgotten part of the city with the historic grain of a desirable enclave of Victorian terraces nearby. And nor has design integrity been sacrificed in the process: the scheme was already a project winner for the 2016 Housing Design Awards.

Equally, the development holds its own in a county that is gradually asserting itself as one of the UK’s key municipal patrons of Passivhaus design. The nearby Carrowbreck Meadow development by Hamson Barron Smith (which acted as cost consultant on Goldsmith Street) is part of a wider framework for delivering Passivhaus housing in Norfolk and is itself the recipient of an RIBA award as well as a Housing Design Award.

So what exactly were the technical and economic strategies that the Goldsmith design team employed to achieve Passivhaus on a 100% affordable housing scheme of this scale? Here is a selection of some of the key measures that delivered this result. 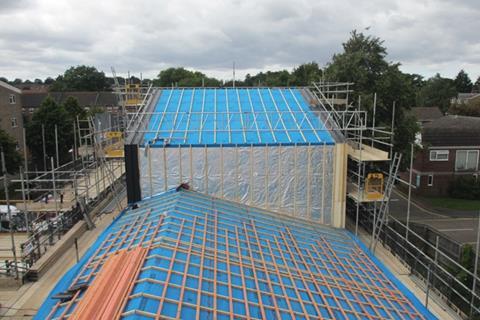 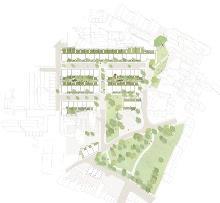 “Once the masterplan is fixed the important thing is to keep everything simple,” says David Mikhail, co-founder of Mikhail Riches. Here, he is essentially extolling the virtues of a rational building envelope. Of course rational, orthogonal forms are cheaper to build with or without Passivhaus. But as Mikhail explains, the importance of rationality within a Passivhaus context means “less envelope which means less surface area which means less heat loss.”

Accordingly, Goldsmith Street comprises rows of regular, orthogonal blocks with the sloping pitched roofs and a number of curved corners marking the only departures from its consistently rectilinear pattern. Occasionally the motif is broken by rooftop dormers that house second floor bedrooms. But these are few and several were removed for reasons of cost and construction logistics at an earlier stage in the project.

“The key is achieving simplicity without monotony” insists Mikhail, pointing to a number of architectural features on the development, such as textured brickwork and a dynamic roofscape, that relieve the clinical repetition that rationality might be thought to induce.

There are several different types, including one, two and three-bed flats and two and four-bed houses. Common details were used across all house types to keep costs down.

Plan and section of a 4-bed house

All good residential layouts should seek to make the design of the services as efficient as possible. But within Passivhaus, the requirements to avoid heat transfer and maintain an airtight thermal envelope become doubly important and form a key measure in achieving a design that keeps costs down.

For instance, any decent residential layout should seek to minimise the number of soil vent pipes (SVPs). But because every time an SVP passes through a wall or floor opens the potential risk of heat transfer, the Goldsmith Street design team took great pains to ensure that not only is there a minimal number of SVPs but that they were placed in locations that required minimal puncturing through fabric.

Consequently, this requirement not only partially informed the location of kitchens and bathrooms, but also their pairing across neighbouring properties. Where possible, these principles were also extended to other services apparatus such as boilers and MVHR (mechanical ventilation and heat recovery) systems. By placing these against external walls wherever possible, the amount of pipework required for ducting to the exterior was minimised, thereby reducing costs. 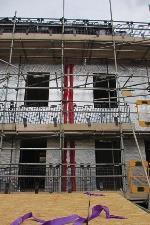 “Solar masterplanning” is what David Mikhail describes as the process of “designing a masterplan layout where the fabric has to do less to harvest energy”. In terms of the Goldsmith Street masterplan, this is conveyed in the skilful manipulation of two familiar tropes of architectural design: form and orientation.

At Goldsmith Street all the terraces face south to optimise natural daylight and solar gain with larger habitable rooms, such as bedrooms and living areas benefiting from larger south-facing windows.

Rooms like bathrooms and studies are generally arranged to the north where smaller windows can be located to minimise heat loss. But the form of the buildings also plays a role in achieving this fabric efficiency. A section through a terrace reveals an asymmetrical pitched roof profile where the north side is shaved at a longer, lower and shallower angle. Rooms that can accommodate sloping pitches, such as staircases and bathrooms, tend to be located under the shallower north-facing pitch. 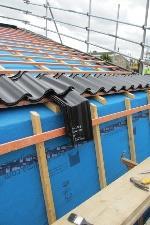 Crucially, the arrangement also means that each terrace does not overshadow the terrace behind it because the shallower pitch exposes the rear terrace to more daylight. This is a mandate further aided by the townscape ambitions of the scheme whose wide 14m-streets not only admit more daylight but allow the development to evoke the generous grain of the desirable Victorian neighbourhood it is seeking to integrate with.

“It’s a holistic balancing act,” explains Mikhail. “It’s about looking about all these elements - profile, height, roof, and so on - synchronistically so that the layout enables the fabric to harvest energy as naturally as possible.”

The technical requirements of achieving Passivhaus are onerous and, Mikhail says “require upfront costs that are not necessarily cheap.” Insulation, airtightness, triple-glazing all come at a cost and while the use of the timber frame at Goldsmith Street achieved these standards and offered programme savings compared to masonry construction, the latter traditionally comes in at a slightly lower cost. 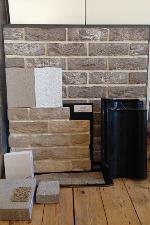 But Mikhail argues that any initial cost premium is more than recouped by the high fuel efficiency achieved at the development (residents’ fuel bills are estimated to be as low as £150 per year) and by looking at the development as a “long-term investment that reduces economic costs” by removing the need for the kind of expensive future environmental retrofits common on traditional housing.

Tenants will pay a rental premium because they benefit from lower energy bills which helps the scheme stack up financially. And Mikhail insists that there was one overriding force responsible for driving this long-term view on the project; the client. “It was the client who was wholeheartedly and resolutely committed to achieving Passivhaus. There might even have been times when they were more committed to achieving it than we were. Without their foresight it’s unlikely the scheme would have been delivered as competitively as it has been.”

Mikhail relates an extensive value engineering process that took place early in the project where significant alterations were made to the brickwork, roof and foundation packages. But he reveals that throughout this process nothing relating to Passivhaus certification was watered down; in fact cost savings made in other areas fortified the Passivhaus features even further by isolating cuts to other areas but still reducing the overall budget.

Mikhail also reveals that the use of a traditional JCT contract allowed the architect the creative flexibility and control that also enabled them to safeguard Passivhaus characteristics throughout the project while making cuts elsewhere. But ultimately he reiterates “it was the client who set the mandate that included social housing and high quality design but always put Passivhaus first”. 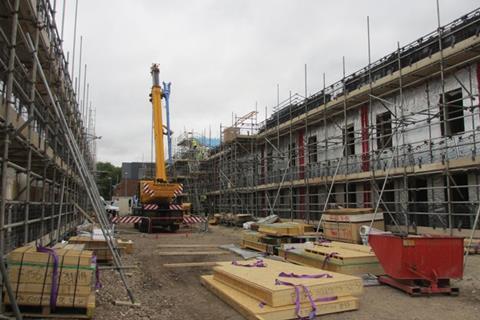