When Marks Barfield Architects was asked to design Cambridge’s first purpose-built mosque, it turned for inspiration to the Garden of Paradise. The resulting building not only links Islamic tradition to its very English setting but is also an exemplar of green architecture.

What constitutes a British mosque in the 21st century? Should it reflect the domes and minarets of Arabian mosques or mimic the muddy, fortified solidity of North African ones? Or more radically, should it tap into British Christian ecclesiastical traditions and reinterpret the gothic and perpendicular styles synonymous with the great English cathedrals? Or should it do something completely different and create a customised architectural hybrid that represents something entirely new?

These are the questions that have rightly obsessed Marks Barfield Architects since it won a limited 2007 international competition to design the first purpose-built mosque in Cambridge. What they came up with in response has led Cambridge New Mosque, which opens today, to be described as the “greenest mosque in Europe”. Central to this claim is the fact that the building’s structure is made entirely from timber, which joins with a host of other sustainability features, such as a ground-source heat pump and natural ventilation, in making the project close to zero-carbon.

The use of timber is also part of an ambitious conceptual strategy that seeks to answer the core question of what a modern British mosque should be. Practice co-founder David Marks sadly did not live to see the project completed, but he was very much the driving force behind the design concept and explained the practice’s approach thus: “We didn’t want to create a replica or pastiche of something that existed elsewhere. The opportunity to do something English, British, excited us.

Now that there is a significant Muslim community it’s time to work out what it means to have an English mosque.” 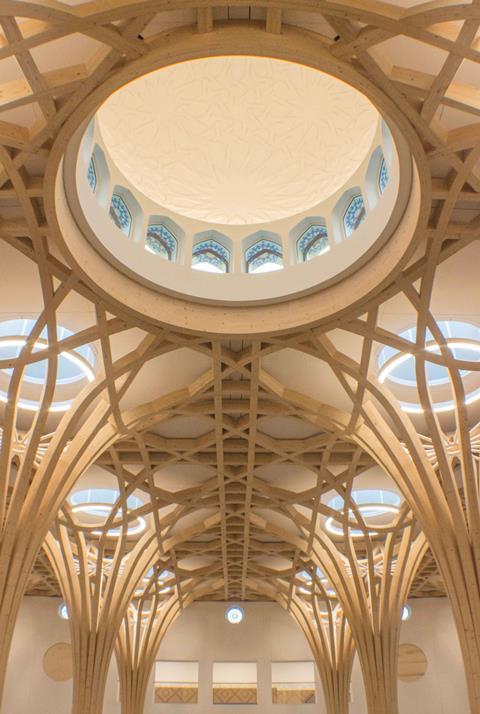 This is the ambitious task the practice first set itself more than 10 years ago, when it started work on the project. It has been no easy feat.

The secularisation of British society over the past century has meant that church-building has lapsed from a civic necessity to a peripheral undertaking usually assumed by a specialist fringe of the construction industry and commanding only a marginal presence within today’s urban environment.

New mosques receive even less socio­cultural exposure. And yet, like churches, they belong to a heavily prescriptive building type with a strict set of design requirements that must satisfy the often rigorous conventions of liturgical worship. Marks Barfield had undertaken one previous foray into Islamic culture with its unbuilt proposals for the Islamia primary school in Kilburn, north-west London. The client for that project, Yusuf Islam – formerly known as the singer Cat Stevens – is one of the co-clients for the Cambridge mosque, the other being Tim Winter, renowned lecturer in Islamic Studies at Cambridge university. 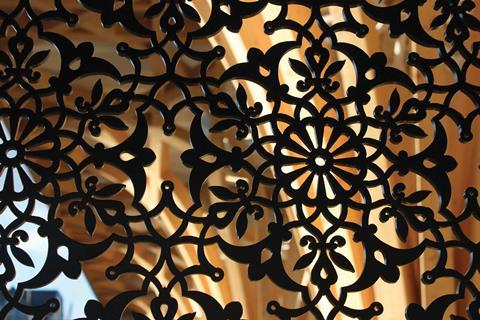 But prior to this project the practice had never built a mosque before. How then did the design team bridge the gap between brief and experience? Practice co-founder Julia Barfield explains: “In many ways we approached it as we would any project: we undertook a huge amount of research in order to educate ourselves and ensure that our response was grounded by an understanding of the typology.”

The process quickly led to a realisation that was to have a huge impact on the project. Barfield continues: “We looked at scores of mosques around the world and discovered that historically, they were incredibly receptive to local culture, materials and technology and they would adapt to their environment accordingly. For instance, here in Britain we may associate mosques with minarets. But minarets were specifically designed as visual and audial calls to prayer in bustling medieval centres. Surrounded by some of the world’s most advanced 21st-century technology here in Cambridge, you don’t need a minaret when an app can do the same thing.” 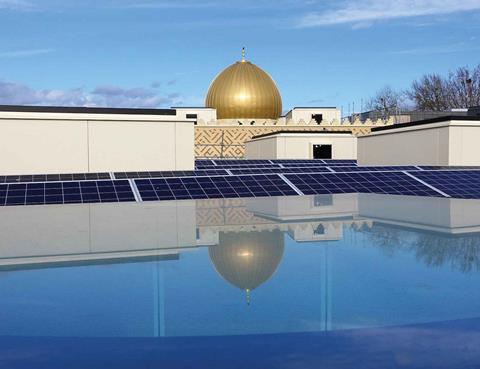 The Garden of Paradise

Eventually the research unearthed a conceptual starting point: the Garden of Paradise. This is a longstanding Islamic tradition wherein nature is pictured as an oasis that aspires towards an ultimate state of tranquillity and calm. Accordingly, the building itself was to be expressed as a “grove of trees” surrounded by pockets of greenery offering trees, fountains and shelter.

This essentially is what has now been realised in the finished building. The mosque is a long, mainly single-storey building that occupies a rectangular site on Cambridge’s busy Mill Road. It is separated into a number of segments that, rather like the processional configuration of a nave in a cathedral, are designed to enable the visitor to move sequentially from the entrance through to the holiest part of the building. 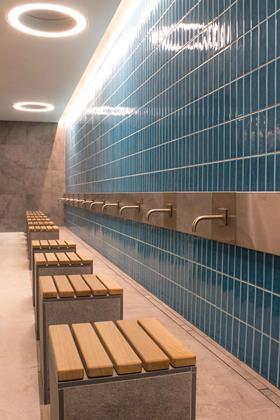 First comes a lawned area, described as a community garden, which directly faces on to Mill Road. This leads through to a more formal garden with trees and water features whose symmetry is based on Islamic precedents. Next we encounter the entrance facade to the building itself, expressed as a deep portico separated by clusters of arched timber piers.

Once inside the building there is a large atrium and cafe area capable of holding up to 300 people, followed by ancillary spaces filled with toilets and wash areas for ablutions. After this we come to the final, largest and most important space in the building: a vast, 8m-high prayer hall that can hold up to 1,000 people. The prayer hall marks a break in the geometry of the rectangular plan for, as with all mosques, it is slanted to face Mecca – in the same way that all Christian altars must be aligned with Jerusalem. As well as identifying the most sacred part of the building, the kink also helps break down its mass in a manner that is contextually consistent with a primarily residential area.

The prayer hall also demonstrates how the “grove of trees” concept central to the Garden of Paradise theme has been spectacularly brought to life. Throughout the building the trees are realised as timber piers on an 8.1m grid that form the building’s defining visual, architectural and structural feature. Each pier comprises a number of timber columns that begin as perpendicular shafts before separating into individual ribs that open outwards like the branches of a tree. 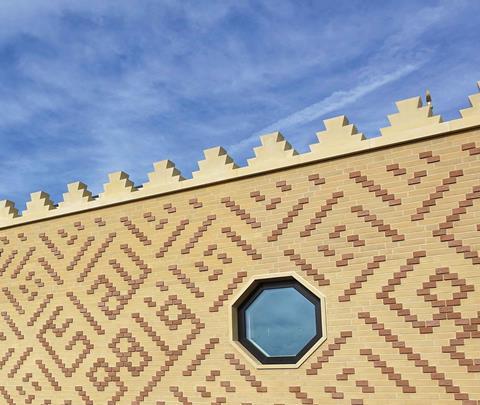 The branches then form an intricate ribbed vault across the ceiling before clustering downwards once again into adjacent piers to repeat the process over and over again. The highly complex geometry of the piers and ceiling is based on an intricate Islamic-inspired pattern designed by geometry expert Keith Critchlow, former research director at the Prince’s Foundation and a one-time lecturer of both David Marks and Julia Barfield at the Architectural Association. The octagonal pattern is based on the Breath of the Compassionate, an eight-point geometric star that is revered as a source of beauty within Islam. Here it forms a geometric anchor for all forms of decoration within the building, ranging from floor tiles and ventilation grilles to the piers and vaulting themselves.

The timber “trees” are magnificent, particularly when viewed as a set-piece within the main prayer hall and, on a smaller scale, in the atrium. They both frame and puncture the space, as if nature sprouting from the ground is reaching upwards to grasp the heavens – much as gothic arches formed giant arrows pointing up to God. The fact that each pier is topped with a glazed oculus that allows light to pour down onto the timber and space below adds to an almost celestial sense of spectacle and awe. 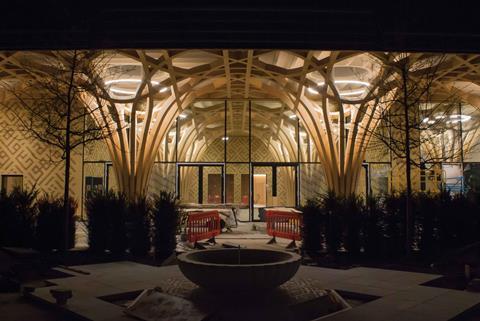 The piers also combine the idea of naturalism so central to Islamic art with a structural dexterity that is almost mathematical in its precision.  Generated using BIM and constructed offsite, their crowns and stems were joined in-situ with tolerances so small as to render their assembly all the more impressive.

While the mosque has no minaret, it does feature a small dome aligned to the mirhab in the prayer hall – an ornamental indention that marks the direction in which Muslims must pray towards Mecca. With such spirited reinvention taking place throughout the building, it is perhaps a pity that this feature marks a reversion to the more conventional iconography associated with traditional mosque architecture. Nonetheless, despite being a late addition to the design, it is executed with the same decorative precision applied to the timber structure.

From outside the building, the mosque’s dramatic internal timber structure is visible only through the entrance portico. While it makes a dramatic impact on the street scene at this point, along the rest of the envelope the timber elements are concealed behind an 18th-century brick slip fascia system known as mathematical tiles. The bricks selected are in a buff yellow that is synonymous with Cambridge and, like elements of the interior, are arranged in another Critchlow geometric pattern – this time a rotational symmetry sequence that spells “Allah” in Arabic. This subtle ornamentation is welcome as it would be a shame to suppress all the building’s dynamic, curving timber structure within an angular brick shell that bore no sign at all of the drama taking place inside.

And it is the drama the internal timber structure offers that answers that core question first posed 12 years ago about what a British mosque should be. Because the most endearing feature of the timber columns is their historic affinity with the fan vaults and lierne vaulting so synonymous with gothic religious architecture, not the least example of which is on display just a short distance away at the spectacular King’s College Chapel.

Fusing Islamic and Christian architectural traditions in this manner is a symbolic masterstroke that uses the threads of architecture to help bind Islamic culture to the native Christian background of England. The country’s first ever purpose-built mosque opened in Woking in 1889, and Barfield’s great-great-grandfather was one of its trustees. For her this coincidence embodies the architectural ambitions of the project.

“For me a 21st-century British mosque is about creating a link between British and Islamic culture, and here we’ve done this by celebrating the universality of nature. This is something unique that links us all, and we believe that this building proves that it’s better to build bridges to connect different cultures than walls.”