Spanish City pleasure dome in Whitley was once known as the Playground of the North. Has its restoration from a crumbling wreck to a mixed-use leisure venue successfully combined Edwardian glamour with a modern commercial space? 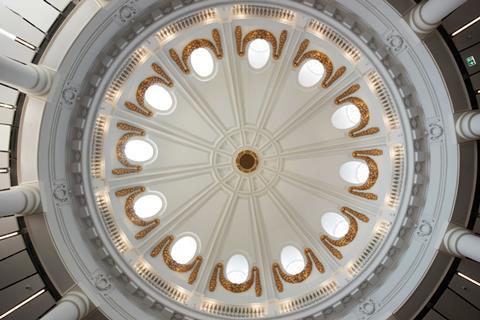 Being England’s 25th-most populous seaside town and having been forced to change its name from Whitley to Whitley Bay in the early 1900s to avoid confusion with the booming east-coast rival of Whitby are hardly formidable claims to fame. But architecturally Whitley has more to boast of: and its most famous feature, apart perhaps from its spectacular lighthouse, is the extraordinary Spanish City pleasure dome.

Initially opening the day after the death of King Edward VII in 1910, Spanish City was once one of the premier entertainment destinations on the north-east coast of England. Just eight miles east of Newcastle and overlooking a large seafront fairground that would host the bullfighting-inspired dance troupe after which the building was named, Spanish City then offered cafes, shops, kiosks, a roof garden, a theatre, a ballroom, winter pleasure gardens and a plethora of live entertainment that helped earn it the nickname “Playground of the North”.

Yet despite enduring as a much-loved visitor attraction across the region and later being immortalised in the 1981 Dire Straits single Tunnel of Love, Spanish City subsequently entered into a long period of steady decline. In keeping with the receding economic fortunes of many British seaside resorts in the late 20th century, decades of underinvestment, advancing dereliction and the inability to find a practical modern use for the building eventually led to its closure in 2002. 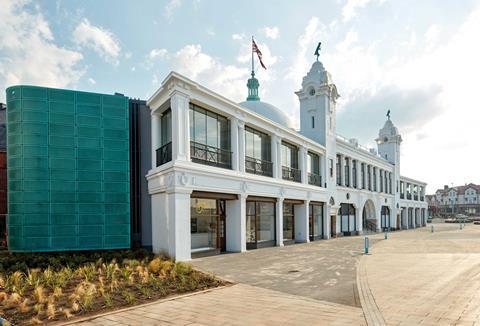 But last month, Spanish City reopened after an ambitious £10m restoration project by architect ADP, which has transformed the landmark building into a mixed-use leisure venue. Sixteen thousand people visited in the opening weekend alone – equal in number to almost half of Whitley Bay’s entire population. The toreadors and ballroom dancers that once graced Spanish City have (largely) vanished and have been replaced by a series of bars, shops and restaurants, as well as a new suite of rooms for events, conferences and weddings.

Along the way the new project has sought to carefully restore damaged original decorative features and remove the most offending elements of previous insensitive refurbishments, chief of which was a 1970s timber “mezzanine” floor, which savagely severed the space under the dome in half. New plant and facilities have also been carefully threaded into the grade II-listed building without harming its historic fabric. 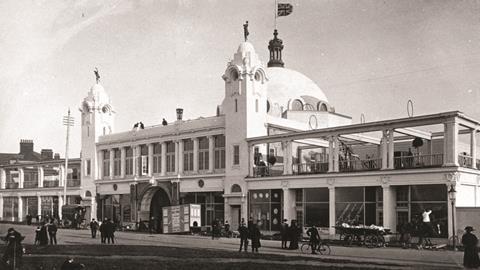 Spanish City shortly after its opening in 1910

The rebirth of Spanish City presents a compelling study in conservation, restoration and intervention and also sets a template for how the sensitive renewal of a revered historic building can play an important role in the wider urban regeneration of British seaside towns.

When Spanish City opened in 1910 to the designs of Newcastle architects Robert Burns Dick, Charles T Marshall and James Cackett, it allegedly took just 60 days to build. While this was undoubtedly a feat of Edwardian industriousness, the contracted programme sowed the seeds for some of the problems that were to arise during its reconstruction more than a century later.

“To put it mildly, it wasn’t built to the best quality,” explains ADP studio director Anita Chan. “When we eventually opened up the building we found walls without foundations, masonry hanging off steelwork, and structural beams and columns heavily corroded.”

The fabric of the building was not helped by its location. Spanish City occupies a spectacular seafront setting overlooking the North Sea coast but has therefore been buffeted by more than a century of hostile coastal climatic conditions, which include high winds and salty sea and air. Add to this pretty shoddy workmanship and it was a perfect recipe for the wear and corrosion that steadily ensnared the building during and before its protracted closure. 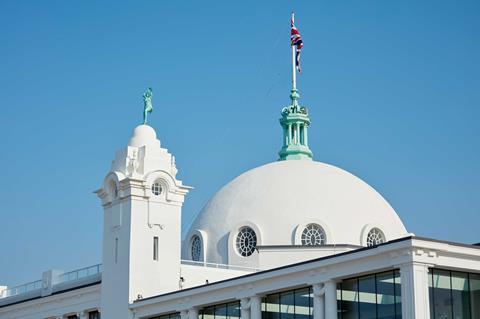 Another challenge came in the unlikely form of the building’s architectural style. Spanish City offers a florid, whitewashed example of the Edwardian neo-baroque style with a riot of decorative flourishes – cornices, cupolas, arches, friezes, statuary and of course its signature dome. Unfixed to the structure, it was these distinctive ornamental features that had suffered most during the building’s decline, with multiple decorative elements either missing or damaged after sometimes simply falling off the building. Chan says that “keeping as much of the building’s original character and fabric as possible” was one of the key aims of the project, so restoring these integral artefacts was paramount.

The solution to this and to many of the building’s other related heritage problems came in the unlikely form of BIM. The entire building was laser scanned using a 3D point cloud survey, which produced a precise parametric 3D model of the building. The information from this model became crucial to replacing missing elements of the building and devising a new services strategy that discreetly weaves through the existing fabric without clashing against any heritage assets.

For instance, when the design team found that a decorative element on the facade – such as in a damaged frieze – was missing, they were able to recreate it by digitally copying surviving elements elsewhere on the building and using these to generate 3D moulds for replacements. This ensured that the new elements retained the visual and stylistic integrity of existing parts. 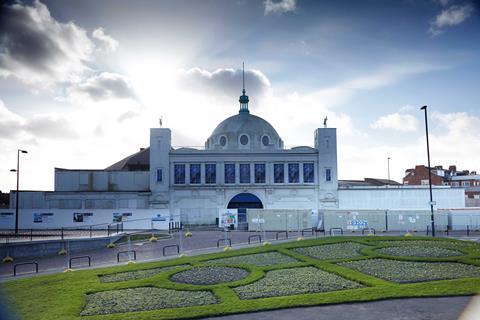 The digital model also proved particularly useful because no original drawings for the building existed, probably a consequence of its breakneck-speed construction.

Two cupolas on either side of the central entrance facade, complete with domes, urns and heavy arched pediments when built, fell off the building long ago and left a flat stump atop each of the twin towers that flank the entrance.

Using historic photographs, the cupolas were recreated on the digital model that generated new glass-reinforced plastic (GRP) replicas to be mounted on each tower. But the team stumbled on a problem – each cupola was surmounted by a distinctive original copper statue of a dancing lady. While the original stone cupolas could have supported their weight, the relatively lightweight GRP could not. 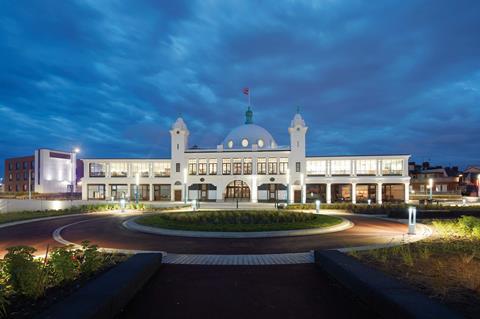 The derelict main facade in 2010 (seen in the image above) and here, after its renovation

A steel column was threaded inside the cupola and fixed to the load-bearing masonry tower below. So while it appears the statues are supported by the cupolas externally, they are in fact propped up by a concealed steel support that is encased in the GRP surround.

Such structural dexterity was also required for the internal renovation of the signature dome. The dome was already an innovative technical landmark in itself, as one of the earliest examples of a Hennebique ferro-concrete system being used in the UK. This is an early form of concrete reinforcement invented by French engineer François Hennebique, where steel reinforcement bars are embedded along the bottom of a concrete slab to resist tensile forces. Its curved application on a dome was novel for its time.

With a diameter of almost 15m and an internal height of 22m, when the dome was completed it was one of the largest classical domes in the UK. The magnificent rotunda inside is supported by mighty concrete columns 15m high. Externally, remedial work included repairing areas of crumbling concrete. Inside, the upgrade to the dome structure itself was fairly cosmetic, with peeling paintwork and crumbling plasterwork repaired and the welcome replacement of a garish 1970s colour scheme with the original white and gold decor.

But the biggest internal change by far has been the removal of the floor that divided the rotunda space into two. The floor had been supported by the rotunda’s concrete columns, so its removal means that structurally the dome now has less work to do. As with the cupolas, the columns have been encased in GRP. But by far the main benefit has been visual, with the soaring domed space that is the heart of Spanish City returned to its former glory.

The rotunda prior to restoration with its mezzanine floor in situ, then (seen in the image below) restored to its original double-height configuration

The rotunda, now used as a local seafood restaurant, is surrounded by an upper gallery that leads into a new suite of bars and event spaces. Two of these spaces are new-build but have been subtly inserted into the fabric of the building.

Originally, the front elevation revealed an open first-floor loggia on either side, occupied by roof gardens. Although the loggia has been retained, the external spaces they once enclosed have been discreetly filled in by large glass boxes, which contain the event spaces accessible from the upper gallery of the rotunda.

Wisely, the boxes are expressed as simple, lightweight volumes that seep into the background behind the decorative Edwardian pomp of the main facade. Internally they are airy, lightweight, minimalist spaces that are well lit by rooflights and offer spectacular views across the North Sea. Architecturally, they form a convincing example of how new-build can be sympathetically inserted into a historic context, while functionally they mark a clever heritage trade-off that provides the additional space and facilities to help make the refurbishment commercially viable.

Aesthetically, the newly encased loggias represent a more successful contemporary addition than the new extension block to the rear of the building. This performs largely the same role as the loggias, housing the new level entrance, toilets, plant and staircase that ensure compliance with modern standards. But its encasement in panellised and perforated green copper panels, selected to mimic the dancing ladies, probably presents too stark and grating a contrast to the whitewashed pallor of the original block. 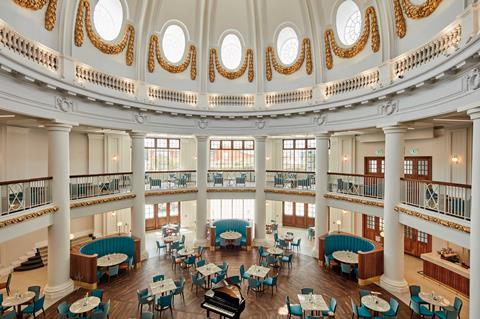 The rotunda prior to restoration (seen in the image above) with its mezzanine floor in situ, then (seen here) restored to its original double-height configuration

But this is a minor detraction from a scheme that genuinely reinvigorates a faded seafront monument to its former glory. In the careful restoration of its original features and the imaginative redistribution of function between its new and old spaces, Spanish City offers a compelling template for how derelict historic buildings in seaside towns can be reutilised as assets rather than obstacles. Furthermore, the innovative deployment of BIM to help restore its heritage features presents yet another example of how new technology can help restore our heritage.