The NHS’ first high-energy proton beam cancer treatment centre opens this summer at the Christie hospital in Manchester. Threading 10km of services pipework through 20,000m³ of concrete while avoiding the 1,700 tonnes of rebar embedded within it was just one of the many unusual challenges on the project 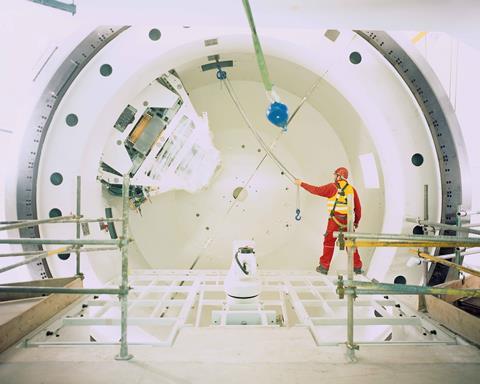 One of the rotating gantries being constructed

For most people in Britain, the first time they were ever likely to have heard of proton beam therapy was during the Ashya King controversy in 2014. Five-year old Ashya was suffering from a brain tumour but was removed from Southampton General Hospital without his doctors’ consent to receive experimental proton beam treatment in Prague. An international manhunt ensued before the Kings were arrested in Spain and extradited back to the UK.

Beyond the sad personal crisis for the King family, the case served to bring to public attention a radical and highly sophisticated form of cancer treatment that at the time was unavailable in this country. But now, four years later, two new proton beam treatments centres are being built in the UK, one at University College Hospital London and the other at the Christie hospital in Manchester.

Each centre costs around £130m and both are being entirely funded by the NHS. It is Christie’s that is set to open first this summer and when it does, not only will it be the first proton beam facility in the UK but it aims to be the most advanced and sophisticated version of only a handful of proton beam treatment centres around the world (including the one in Prague where Ashya eventually received his treatment).

Fittingly, the building’s list of technical features is almost as extraordinary as proton beam treatment itself. To meet the building’s gigantic energy load a new sub-station was built, which provides an equivalent amount of power to that needed to run the nearby Trafford Industrial Park. To contain the radiation, the concrete walls are up to 6m thick. Consequently, despite being just three storeys high, the building comprises an incredible 20,000m³ of concrete with 1,700 tonnes of reinforcement provided by steel rebar up to 100mm thick. Through this, 10km of services pipework has been carefully embedded. The concrete itself weighs 48,000 tonnes, the equivalent of two aircraft carriers. 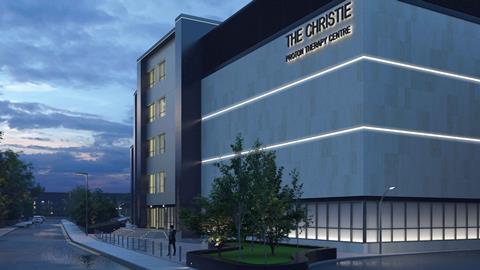 However, this remarkable amount of concrete is not solely in place to contain the radiation, it is also there to support the four gigantic pieces of machinery around which the building is built. Three of these are rotating cylindrical chambers known as gantries and they are 10m in diameter and weigh around 180 tonnes. And while the particle accelerator where the proton beams are actually generated is only 4m high, at around 280 tonnes it weighs roughly the same as a Boeing 747. To put this into perspective, MRI scanners can weigh as little as 4 tonnes and as they emit no radiation require no surfeit of concrete. Equally, CT and X-ray scanners, which use photon cells, require only standard-density concrete approximately 100mm thick in order to provide effective shielding from radiation. 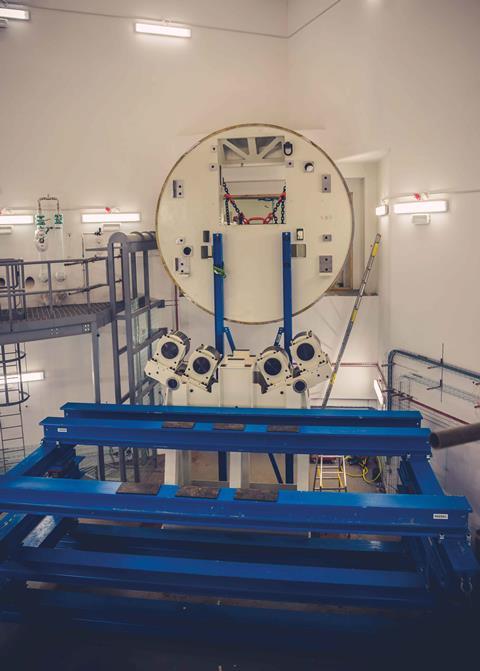 Of the Christie facility’s total budget, £80m has been spent on construction while £50m has been allocated for the equipment alone. And the entire project had to be delivered while the wider hospital site was still operational.

The justification for this extraordinary collection of features and the key to understanding the building’s unique set of technical specifications is proton beam treatment itself. If ever any medical treatment sounded as if it were lifted from the pages of science fiction, it’s this. Today there are three main strategies for treating cancer: surgery, chemotherapy and radiotherapy. Radiotherapy uses photon cell radiation to kill cancer cells but its inexact level of exposure risks causing damage to healthy tissue around the tumour which can potentially lead to health complications and negative side effects.

However, proton beam therapy can more precisely concentrate the area of radiation to the tumour in question. It allows for radiation to be meticulously adjusted to a precise breadth and depth across and within the body that exclusively targets cancerous cells. Such accuracy is particularly welcome in children, whose organs are more susceptible to damage as they are still growing. 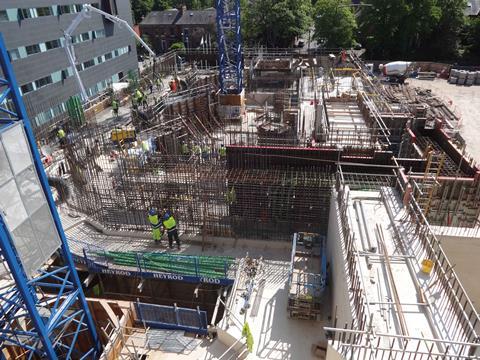 1,700 tonnes of steel reinforcement have been embedded into concrete walls up to 6m thick

Two-thirds the speed of light

The treatment works by a particle accelerator known as a cyclotron, stripping hydrogen gas atoms of their electrons to create charged, high-energy sub-atomic particles (protons). These protons are then injected into a vacuum chamber at the centre of the cyclotron. Here a strong, oscillating magnetic field accelerates the protons to two-thirds the speed of light. These protons are then ejected into a vacuum tube system surrounded by scores of additional magnets. These magnets can then adjust the speed and energy of the protons to the desired level. The vacuum tube system then leads to a gantry where the specified dosage of proton beam radiation can be applied to the patient. While the patient lies in a static position on a bed in the middle of the gantry, the gantry can rotate a full 360 degrees in order to deliver the radiation treatment to any part of the body.

This is essentially the process the Christie facility has been built to provide. In construction terms the new facility has been split into two, a conventional three-storey steel-frame building which houses reception, ancillary and administrative spaces and the mass concrete section which houses the gantries and cyclotron. 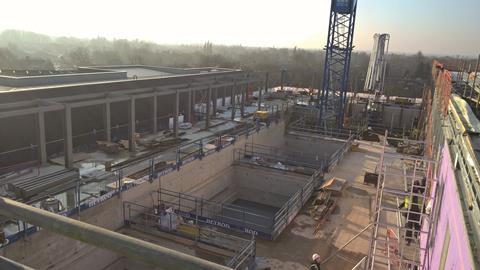 Four separate chambers have been built to house the gantries and cyclotron, with a separate fifth chamber used for research purposes. At almost three storeys high, the gantry chambers assume the full height of the building, with patients entering them at first floor level in order to reach the beds placed at their centre. While only one gantry can operate at any time, the triple arrangement means that patients can be accommodated in each gantry in quick succession. This ensures an operational efficiency that helps justify the centre’s enormous cost and aims to treat up to 750 patients a year.

The sheer scale of the concrete required to accommodate this specialist machinery and prevent radiation escape proved to be one of the key technical challenges of the project. Over 100 concrete pours took place during the project and concrete pieces were specially locked together during the curing process to ensure that no radiation would escape. The concrete mix was also carefully determined by strength and radiation requirements using a high aggregate mix that minimised the risk of thermal cracking.

Threading 10km of services pipework through the concrete while avoiding the 1,700 tonnes of rebar embedded within it added another challenge, one that was only resolved by using a BIM Level 2 virtual model, as Jason Dawson, director of capital at the Christie NHS Foundation Trust, explains: “Delivering a project of this scale and complexity without BIM would have been virtually impossible. On the model we were able to set out the position of every piece of rebar and ensure that ductwork and services avoided clashes. The model was also essential with the construction of the gantry chambers. 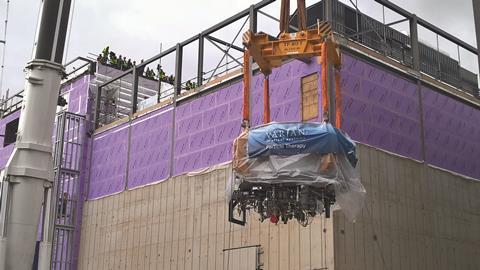 “As well as the magnets and tubes, the outer edge of the gantry is covered in a mass of equipment like platforms, ladders and steps. When rotating, the tolerance between these and the outer edge of the chamber is tiny and in one instance we had to create a recess in one of the outer walls in order to accommodate these elements when rotating. But the key thing is we spotted this on the model and not on site and it’s that level of accuracy and prediction that is essential on a project this complex.”

Another huge challenge with the construction was lifting equipment into place. Conventional lifting would have been impossible on pieces of equipment weighing up to 300 tonnes. So once the walls of the treatment chambers had been constructed, one of the UK’s largest 1,000-tonne cranes was used to carefully lift the equipment in from above. Temporary concrete sleeper slabs were placed above the voids to prevent radiation escaping and enable work to proceed elsewhere.

Cooling and ventilation also forms a key part of the project. The cyclotron needs to be very cold to operate and uses superconducting magnets cooled by liquid helium and liquid nitrogen that reaches temperatures as low as -269ºC. This is delivered by coils of copper wires measuring a total of 25 miles. 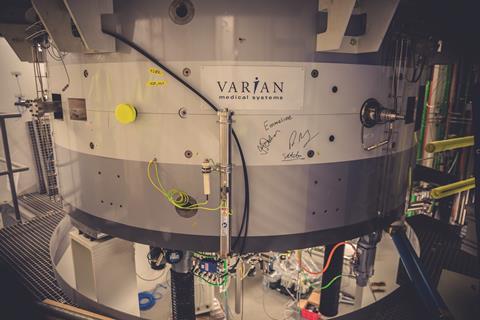 The cyclotron in situ… 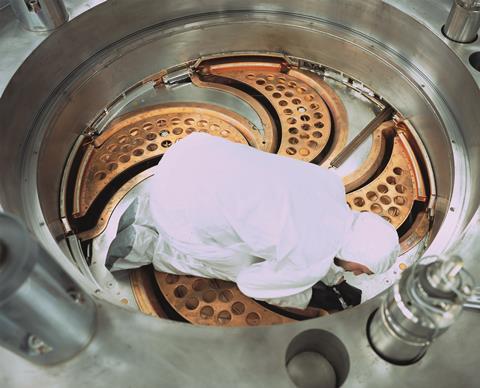 The completion of Christie’s proton beam therapy centre represents a massive technical achievement and provides a compelling example of how traditional construction and site logistical techniques can be modified to accommodate the highest standards of advanced medical treatment. But at its core this represents a profound medical advancement for the UK too, as little Ashya King’s full recovery after eventually receiving his proton beam treatment attests.