Expanding Burlington House into Burlington Gardens is all about forging a strong link between these two historic buildings, using existing underground vaults and a new connecting bridge 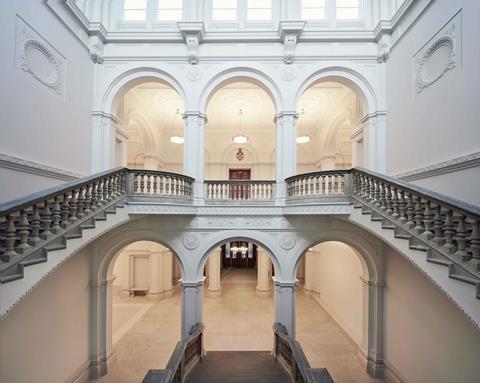 The 250-year-old Royal Academy has now joined the throng and acquired an extension of its own. Last weekend David Chipperfield’s extensive £56m overhaul of the academy’s historic Mayfair campus opened to the public, swelling its size by an impressive 70% to cover almost 10,000m². But this extension is different, for two reasons.

First, the new accommodation has been found in an existing building rather than a new one. So there is no new street-facing external architecture. The newly occupied existing building is also historically significant in its own right. The academy’s core block remains Burlington House, Charles Barry Jr’s ambassadorial Italianate pile of 1873, itself built around the remains of Lord Burlington’s early 18th-century Palladian palace.

The academy has now extended into another, even more monumental Victorian building, just north of Burlington House. What is now known as the Burlington Gardens block was built by Buckingham Palace ballroom designer James Pennethorne in 1870 for the University of London. After the university vacated it in 1900 it housed various disparate civil and cultural functions and was most recently home to the Museum of Mankind, an anthropological offshoot of the British Museum, until 2004. Thereafter it was acquired by the academy and mainly housed temporary exhibitions hosted by the Royal Academy Schools. The RA Schools is the academy’s world-renowned art school located in the basement of Burlington House. 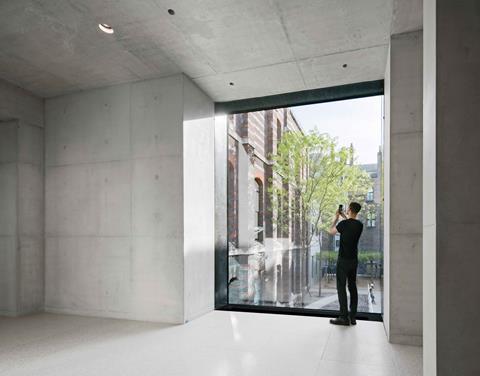 The second reason why this extension is unusual is that the project really isn’t about an extension at all, it’s about the connection between the two independent Victorian buildings. The principal challenge has been how to connect the two buildings and merge them into one unified gallery campus. This emphasis on connectivity rather than expansion immediately changes the tone and nature of the entire project. This is no bombastic contemporary architectural statement designed to sit in stark contrast to its historic host. Such an approach is an already well-mined architectural trope for gallery extensions and one that Chipperfield himself plundered to sublime effect with his Neues Museum in Berlin.

Instead this is a subtle stitching together of two already architecturally assertive historic buildings, in which the new interventions remain for the most part externally invisible and visually subservient to their heritage context. It is a difficult balancing act to achieve – and one that previous proposals by both Hopkins Architects and Colin St John Wilson failed to pull off. But achieve it Chipperfield largely does.

Visually he does it by ensuring that his intervention is largely light-touch. The project shows a degree of contextual humility and stylistic restraint that one might not immediately associate with an architect whose stark minimalism has perhaps become his defining trademark. His work on the interiors of Burlington Gardens – already rich with typically effusive Victorian décor – has, wisely, been more a case of restoration than alteration.

But architecturally the stitching together is achieved by transforming the connection between the buildings into a subtle and engaging series of spatial transitions rather than physical interventions. The key concept for this is the imposition of a new public route that runs right through the two buildings along the north-south axis. This extends from the Burlington House entrance to the south right through to the Burlington Gardens entrance to the north. 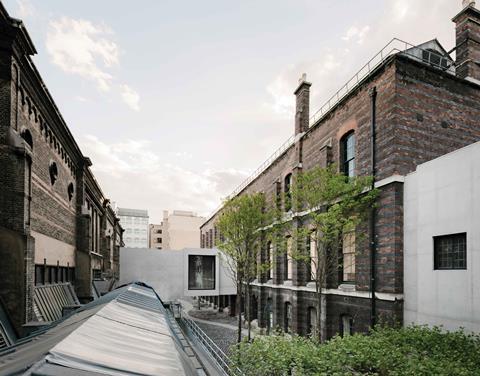 As luck would have it, both entrances are virtually on the same axis with less than a metre differential between them. This allows for a central route that does not violate the symmetrical planning of the classical blocks. Impressively, this route will be accessed at no charge to the general public, with Royal Academy president Christopher Le Brun describing it as “the new Burlington Arcade”, in reference to the historic covered shopping passageway that runs alongside the academy.

Crucially, however, it was decided early in the project that this new internal route must not intrude on gallery space, something that previous schemes had done to their detriment. This requirement meant that while the central axis route worked well horizontally, it would have to shift up and down vertically in order to avoid the galleries on the principal floors at Burlington House.

This shape-shifting process is evident from the start of the route at Burlington House. The academy’s entrance hall is unchanged, but those wishing to reach Burlington Gardens must pass behind the main stair and head down a short flight of steps.

From here, the visitor reaches the first main section of the route, which runs through the vaults underneath the main gallery spaces. The masses of cabling and pipework that were here have been carefully repositioned to reveal a fine brick vaulted arcade that burrows through the basement. This has been transformed into an underground street theatrically lined with sculpture from antiquity and student exhibits.

In institutional terms this is a radical move as the new sunken route cuts through the Royal Academy Schools, exposing the work of its students to public view for the first time. In so grand a building these vaults also maintain a surprisingly utilitarian feel, but the spatial shift they engender is a pleasingly dramatic one. It is not all a case of conveniently reappropriating existing spaces – there is as much new architecture as old here, although invisibly done. The brickwork has been forensically cleaned and restored, the floor lowered to accommodate a new lofty height, and the entrance steps, formerly external steps in a narrow lightwell, widened to accommodate public visitors for the first time. 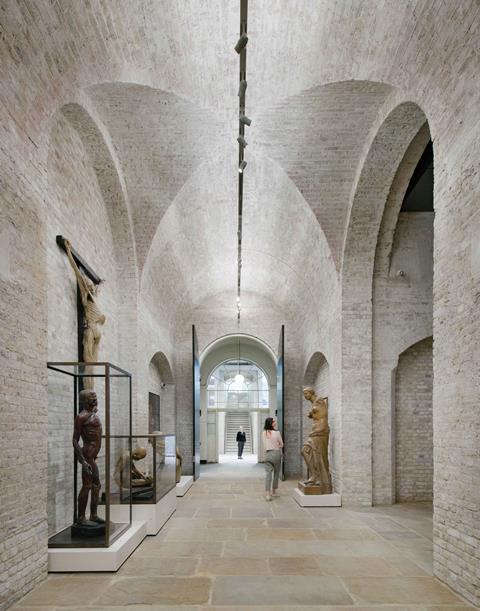 A new basement arcade links to the staircase ‘bridge’

At the opposite end of this underground arcade lies Chipperfield’s principal connection device between the two buildings. It is also the only part of the scheme that can be reasonably termed new built architecture. A long flight of stairs leads up to link to the ground-floor level of Burlington Gardens beyond. Chipperfield describes this feature as a bridge, and it does indeed span the narrow strip of courtyard that separates the two buildings.

But entombed entirely in trademark Chipperfield concrete and with a long flight of stairs to ascend, one does not really get the sense of being in an elevated connection at all. Happily there is a large window at the summit, revealing the courtyard with the buildings running along either side.

The bridge itself, though – if one can generously term it such – feels like a curiously mean and placeless gesture. Too narrow to evoke gravitas and yet too polished to evoke the dusty antiquarian charm of the vaulted arcade, the windowless stairwell feels like a demilitarised and misappropriated relic of Chipperfield’s Hepworth Gallery, an airtight wartime escape chute improbably rammed between two elegant country mansions.

The route returns to surer footing once the stair has been ascended and Burlington Gardens is breached. A lofty new gallery leads to Pennethorne’s entrance hall, a majestic vaulted space complete with double-flight imperial staircase. This in turn leads to a sequence of new first-floor galleries, one of which displays the academy’s gigantic, almost full-sized 1520 copy of Leonardo da Vinci’s iconic Last Supper, arguably the most accurate and important copy of the painting in existence today. Refreshingly this gallery also contains filtered views out onto the street through veiled windows, a thrilling visual connection with the city outside that is rare in contemporary galleries.

New interventions also include an impressive lecture hall conceived as a semi-circular arena in the Greek “agora” tradition. A new architecture studio beside the lecture theatre aims to give architecture equal footing with art among academicians for the first time and allows for immersive and rotating creative displays. Unlike Burlington House, which started life as a domestic building, Burlington Gardens was always built as an institutional one so the academy’s new accommodation here benefits from the larger, loftier spaces that make conversion into galleries a fairly logical shift.

Throughout the Pennethorne block Chipperfield’s restoration is well judged and finely expressed. In the entrance hall tiles have been removed to reveal original stone floors and the walls have been painted a subtle grey that offers a coolly impassive backdrop allowing the Victorian detailing and decoration to take centre stage. Terrazzo flooring features extensively across the new galleries and the spectacular Senate Room has been restored to its vivid colour scheme and transformed into a bar. 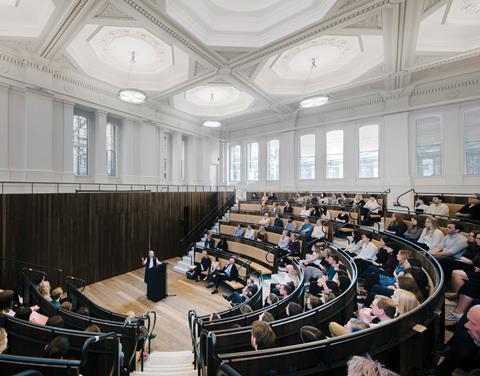 A new lecture theatre has been constructed in Burlington Gardens

In this new scheme, the problem of Burlington Gardens has been convincingly solved and the new spaces fit into it so effortlessly they feel as if they have always been there – invisibility of intervention being as ever the Pyrrhic victory of successful refurbishment. Chipperfield maintains that he has achieved this by “not imposing all that much and by finding a way to get the original character of the building back”.

But he perhaps does a modest disservice to the success of his strategy by underplaying the importance of the link between the two buildings. For it comprises far more than just the questionable “bridge”. The link starts at the entrance to Burlington House and ends at the far entrance to Burlington Gardens. By inserting this weaving, twisting, connecting public street right through the warren of vaults and spaces that straddle the Royal Academy, the scheme fortifies this most private and institutional of cultural campuses with a new urban spine.