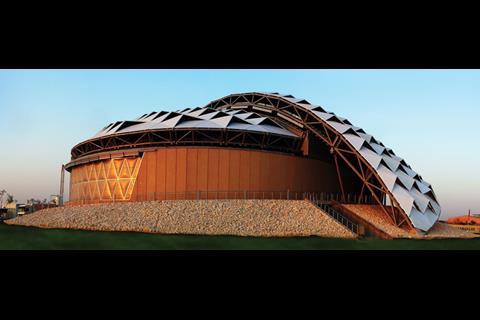 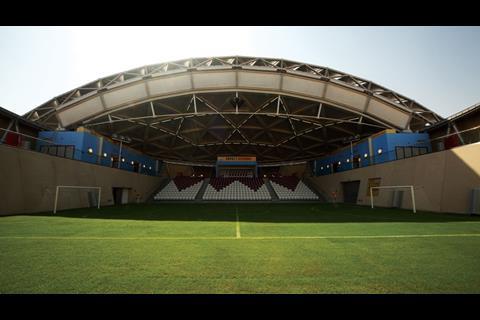 World Cup matches cannot be played under cover, so a rotating roof protects the showcase from the sun and wind, but opens the pitch to the sky when needed 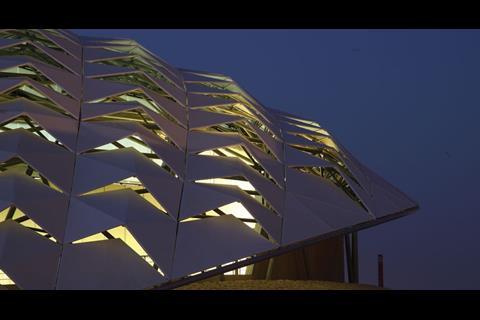 The PVC roof panels create north facing “cowls” that block out direct sunlight but allow a degree of natural light onto the grass pitch. 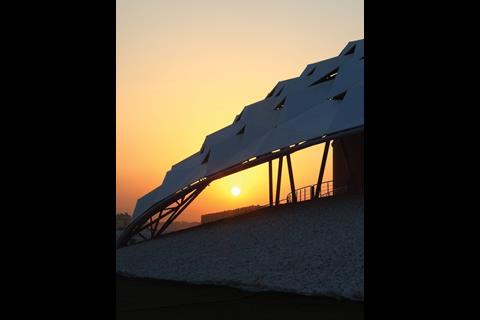 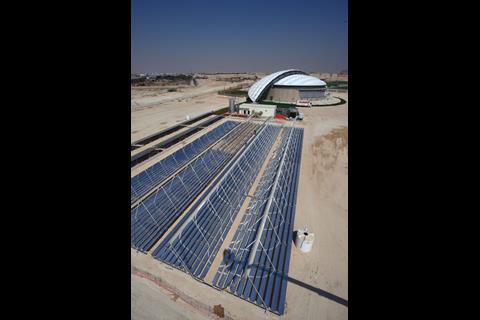 Qatar wants to host the 2022 World Cup. But first it has to convince FIFA that the game can even be played in a Qatari summer. So it got Arup Associates to create a micro-climate inside a 500-seat test stadium. Cool.

As Brazil prepares to host the next World Cup, other countries are already setting their sights on 2018 and beyond. One of these is Qatar, which has just unveiled the centrepiece of its bid for the 2022 event: an 86,000-seat stadium designed by Foster + Partners. If successful, it will become the first country in the Middle East to host football’s biggest competition. Money is no concern: £2.5bn has been allocated to the tournament if Qatar does win. What is a problem is the country’s climate. Any chance of success hinges on proving that the hot and humid summer conditions won’t be too much for players.

Qatar is no stranger to football. For the past 60 years it has had a buzzing national league, but games are played on winter evenings. This is not an option for the World Cup: its games will have to take place in the late afternoons of a blazing summer.

There are no hard-and-fast rules for spectators, but FIFA sets down recommendations aimed at preventing heat stress for players, and temperature and humidity are critical. FIFA uses wet-bulb measurements; this is the temperature you feel when your skin is wet and exposed to moving air. Between 29.4 and 32.1ºC there is a high risk of heat stress, and at 32.2ºC and above the risk becomes extreme, and football should not be played for more than 30 minutes without a break. In a Qatari summer, ambient dry temperatures can hit the mid-40s with relative humidity of 80%, which equates to an “extreme” risk.

“If measures aren’t taken, you get into the situation where players need drips at half time and then it is brutal; it’s not sport, its torture,” says Mike Beaven of Arup Associates.

The only way to prevent this is by air-conditioning the stadiums. But even an oil-rich state such as Qatar knows that expending lots of energy cooling outdoor spaces isn’t going to win over FIFA officials or the watching world. So, at the end of last year it commissioned Arup Associates to design and deliver a 500-seat test stadium that would demonstrate how it could be done sustainably.

The aim was to create a micro-climate well below the danger level, which would also be comfortable for spectators. Arup took a three-pronged approach with the design, which has been built to accommodate a five-a-side pitch.

Unless it is extremely hot and windy, the roof will open and the match will begin, the ice store providing a constant supply of air to cool spectators and players

According to Beaven, the easiest and probably cheapest way to achieve a zero-carbon stadium would have been to generate as much electricity as possible using renewables and use it for cooling. Unfortunately, this would have created unwanted peaks on the electricity grid. Instead, the electrical energy needed for powering items such as the floodlights, fans and pumps has been separated from that needed for cooling.

A photovoltaic array will export electricity to the national grid all year round and this should exceed the amount of electricity imported for events during the year, making the facility zero-carbon for electricity.

Alongside the PV is an array of solar thermal collectors. These strips of mirrored metal track the sun and focus its light onto collecting tubes filled with water. These heat the water to about 200oC after which it is piped to a storage tank, then to an absorption chiller that charges up the ice store (see box, opposite) that provides cooling for the match. “It’s all existing, scaleable technology,” says Beaven. “They wanted radical innovation using conventional components.”

The third prong of the design is the building itself. A lightweight roof is designed to protect the stadium from the hot summer sun and offer wind protection during matches. It comprises an oversailing west-facing fixed section made up of PVC “petals” on the outside arranged to create north-facing cowls that bring light into the space. Beneath this are ETFE pillows that help control solar gain.

World Cup matches cannot be played under cover, so the other half of the roof is designed to rotate on motorised tracks, slipping beneath the fixed section and exposing the pitch to the sky. The idea is that the roof will be closed and the cooling started on the day leading up to a match.

Air-handling units will pump out chilled air beneath the raked seats and this will create a reservoir of cold air in the stadium bowl.

To absorb and store the cold, the test stadium has been designed with a heavyweight, precast concrete structure at the lower levels. Come match day, the shading roof will remain closed over the space until the sun has passed overhead. Unless outside conditions are extremely hot and windy, the roof will then open and the match will begin, with the ice store providing cool air for spectators and players.

The biggest threat to this design is wind. The danger is that when it hits the rim of the stadium’s top tier of seating, it will create currents that scour out the reservoir of cool air in the bowl. “On a still day this isn’t an issue but on a windy day the cool layer of air is reduced and one of the things that will need to be looked at in future designs is how we prevent this happening,” says Beaven.

The baby stadium was designed in just six weeks and construction was completed in six months, in time for the FIFA delegates to visit after the South African World Cup.

It’s always nerve-racking when a prototype building is switched on for the first time a couple of days before officials turn up, says Beaven, but it worked, and the visitors were were interested in the technology. “They know these are challenging conditions … and the stadium did exactly what it needed to do.” Outside temperatures had reached 44oC only two hours earlier, but the temperature on the pitch was 23oC.

The big question is: can this be scaled up to meet the demands of a World Cup? Qatar’s plan is to build 12 carbon neutral stadiums. Most will have a capacity of between 40,000 and 50,000, with Foster + Partners’ larger Lusail Iconic stadium reserved for the opening match and final.

Although the stadiums are carbon neutral in terms of their operation, they hold a great amount of embodied energy - a situation exacerbated by the need to import most of the construction materials. To help tackle this, Qatar’s plan is for the upper tiers of nine of these facilities to be removed after the games, which will halve their capacity. These structures will then be shipped to developing countries to create new venues. One stadium will be completely modular and will be deconstructed after the event.

Beaven does not foresee any technical challenges when it comes to upscaling the energy systems. The main change would be to replace the water in the solar cooling system with oil, which can rise to higher temperatures and so store more energy, which could be used to drive a steam turbine to power the chillers. This is a more complicated set up but it would offer greater efficiencies and allow for a smaller solar thermal array.

This is important, because even the mini-stadium’s array takes up twice as much space as it does. A 50,000-seat stadium would need a vast area. Beaven argues that given the vast areas of empty desert in Watar, space isn’t an issue; he adds that there is the potential to incorporate an element of the solar array onto the roof of the stadiums, although how this would work with an opening roof has yet to be explored.

The showcase has now been handed over to the Qatar Science and Technology Park for further testing. The aim is to work out how the technology can best be integrated into the designs for the new stadiums, and even how they can be used in any arid climate.

Beaven also believes it could be a catalyst for change, especially if Qatar gets the nod for 2022. “It’s an exemplar of what is possible and is emblematic of green power in arid regions,” he says. “It breaks the rules and because of its high profile it could have an impact on many other developments, not just in the Middle East but around the world.”

Old tech in a new way

The Qatar 2022 test stadium packages together a host of well understood technologies. The photovoltaics are off-the-shelf panels, and the solar thermal array is made up of mirrored strips on motorised pivots that track the sun and are lighter and easier to control than the parabolic mirrors that are more commonly used.

One of the concerns with the mirrors was how to keep the reflective surfaces clean in the dusty environment without wasting water on washing them. The solution turned out to be simple: run a squeegee along the surfaces in the morning when they are covered in dew.

The idea of the hot water storage tank is to create a two-hour buffer of hot water to supply the absorption chillers. These work best when there is a continuous supply of water at a constant temperature, and the store is sized to provide two hours’ worth at 200oC.

The absorption chillers take this hot water and, through a complex process, use it to generate water cooled to 7oC, which is used to charge the ice store. In fact, this is packed with hundreds of balls made from a wax-like phase change material that freezes at 7oC. These store the cold like an ice pack in a freezer bag ready for the match later in the day. The store is oversized to provide six to seven hours of cooling, although for a larger stadium this could be resized to provide about two hours.

Kicking up a dust storm 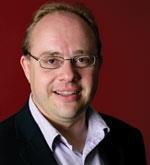 Even if all 12 of Qatar’s planned stadiums are carbon neutral in terms of the energy used to run them, is it really sensible to be developing in such a harsh climate? Mike Beaven of Arup Associates argues that it is justifiable and could have wider benefits for other countries. “People worry about building in hot climates but don’t worry about building in cold climates where you have to heat the building for eight months of the year.

“In Scandinavia they use a lot of energy but they generate it sustainably using hydroelectric power so nobody raises an eyebrow. There is this thing about development in cities in the Middle East that require cooling and water treatment, but if the energy source can be zero carbon, what’s the problem?”

Nor, argues Beaven, do people see a problem with the mechanically cooled stadiums built in the US or building in hot climates such as Arizona or Las Vegas.

It’s also ironic that countries that have got rich from oil are using it to develop sustainable technologies. This is a positive step, says Beaven. “It is something that is taking forward technologies both for countries in the Middle East and the world.”