This year’s Serpentine Pavilion explores one of the key relationships that have rightly preoccupied many of its predecessors, the contrast between the organic, pastoral quality of Hyde Park’s landscape and the hard-edged physicality of the built architectural form. Fujimoto’s solution is one of the most ambitious yet, he has attempted to construct a cloud-like form from an intricate, three-dimensional tracery of miniature steel bars and interlocking polycarbonate panels. Together these create a transparent, semi-enclosed canopy, which, as Fujimoto explains, represents a “constructed geometry woven together with the vivid greenery of the surrounding plant life” where the “natural and man-made merge.”

The concept is robust enough and Fujimoto’s pavilion probably cuts the most striking physical appearance since Jean Nouvel’s womb-like, blood red contribution three years ago. On a bright sunny day the contrast between the crisp blue skies, rich green parkland and the clinical white skeleton of Fujimotos’s undulating canopy makes for a dazzling visual composition that powerfully resonates with the architect’s intended juxtaposition of nature versus architecture. Also, as visitors are invited to weave underneath the pavilion and even climb across it by means of the raised steps and stages cleverly woven into the structure, the pavilion creates a sense of intimacy and accessibility that further enriches the relationship between the physical and pastoral. 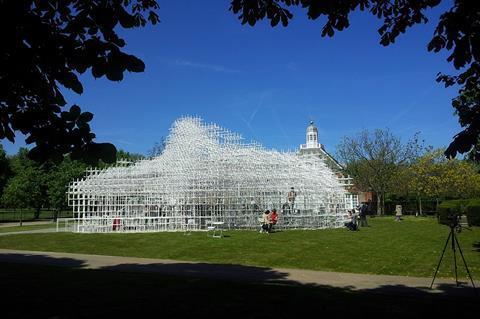 The Serpentine Pavilion is a striking vision from a distance

But it is this closer inspection that disappoints. Clouds are perhaps the most ethereal and sublime of all nature’s elements and for as long as civilization has existed their heavenly status has provoked both ardent philosophical query and dreamy, child-like wonder. To capture this architecturally is a monumental challenge, one which is most effectively realised at the Serpentine when observing the structure from a distance where its meshed, indeterminate form rises enigmatically from the verdant greenery that surrounds it. But up close, its gridded lattice of open steel-work imbues it with the rather more prosaic quality of scaffolding or a giant, unfinished greenhouse.

Perhaps like the clouds and heavens themselves, this year’s Serpentine Pavilion is at its most powerful when imagined from afar rather than sought at close range. 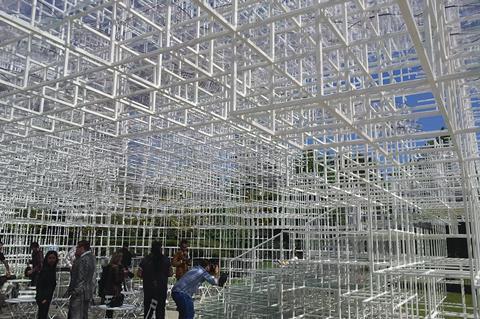 Close up, the gridded lattice of open steel-work gives the pavilion the quality of scaffolding