Slackwood Farmhouse: Ahead of the curve

Adjoining a 17th-century Lancastrian farmhouse, Paul Archer Design’s curved-glass pavilion is both strikingly modern and a discreet addition to the landscape 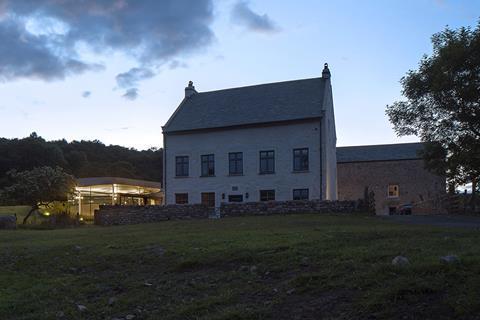 Commanding glorious views of rolling countryside, the newly restored 17th-century Slackwood Farmhouse adjoins the Leighton Moss RSPB reserve in Carnforth, Lancashire. This is just as well, given that identifying birds using a powerful Second World War periscope is one of its owner’s favourite pastimes.

To enhance the bird-watching experience, Paul Archer Design was commissioned to design a modern, fully glazed, circular observatory that sits to one side of the grade II*-listed farmhouse. Cutting into the hillside at the back, the glass structure “pokes its head out to the landscape, allowing views all around. Its roof floats above, lifting itself up to the hill behind that bears down on it,” says director Paul Archer.

Archer adds that the client wanted a space that was distinctly different from the old house, and one that reached out to the landscape. “We wanted the strength, simplicity and form of the farmhouse to be undiluted by what we were adding to it,” Archer says. “I wanted to make our structure feel like it was part of the hillside, and to allow the old building to stand proud.”

The client also wanted a curved-glass pavilion, a form that Archer was itching to explore. “We tend to do square buildings and we had never worked with curved glass before,” he says. “It was a leap of faith on the client’s part, given that this was our first project to use it, and we had to do quite a bit of research to understand how curved glass is manufactured and whether a UK manufacturer could do it.”

But in contrast to the curved pavilion, the link structure is discrete and well concealed when viewed from the front of the 1ha estate. It connects the observatory to the farmhouse and offers a wonderful light-filled space for dining, as well as providing access to the rebuilt stone bothy located at the rear. 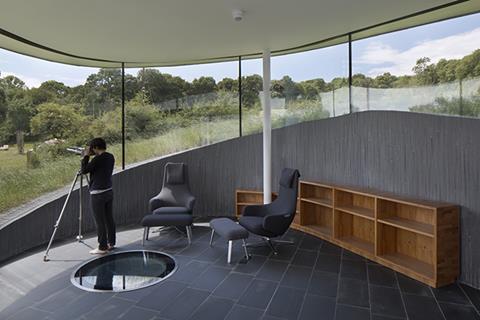 Before the glass could be fitted, the site had to be prepared to accommodate these new structures. This included the demolition of a fifties lean-to and cutting into the slope to provide an even platform. It also involved the erection of a concrete retaining wall to support one side of the observatory and the laying of a concrete floor slab.

For the observatory, a steel frame was assembled comprising four columns which support a horizontal lattice for the roof. A horizontal perimeter steel ring beam rests on top of the columns and is curved to form an oval shape. It also forms the structure for the link. A curved aluminium frame made by Cantifix was screwed to the inside of the steel and the structure was then ready to accommodate the glass. Four pieces of curved glass were carefully craned into place, connected to brackets located at the top and bottom of the aluminium frame and silicon-bonded to each other. 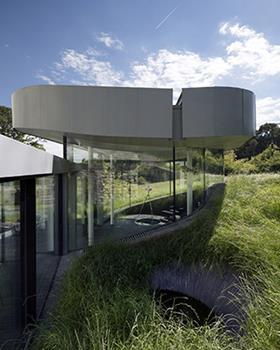 Each curved panel is 2.3m wide and they vary in height from 1.4m to 3.3m. The panels are double-glazed, consisting of a 10mm outer pane, a 16mm cavity and 13.5mm heat-strengthened laminated interlayer. The complexity of curved glass means that each panel has to be of the correct radius, in this case 2.5m - otherwise the glass can distort. “If the glass is curved too much, light can still come through, but the view is distorted, so the curve has to be fairly shallow,” says Archer.

The rest of the observatory is made up of flat panels of glass and triple-glazed sliding doors by Skyframe. The plasterboard ceiling is slightly bowed in a concave direction to give the impression, when standing inside, of the ceiling lifting up to the slope outside. The zinc-clad roof also has a large overhang to create the illusion that it’s floating. A channel running down the middle of the roof collects rainwater and redirects it to an oval-shaped slate bowl located in the ground that doubles up as a bird bath.

The concrete walls are clad in Burlington slate sourced from a local Cumbrian quarry. The slate pieces are embedded in an unusual vertical fashion all around the observatory to hide the drainage channel, as well as to tie in with the slate roof of the farmhouse and blend into the surrounding landscape.

The design and construction of the link was less technically challenging than the observatory, mainly because the architect had worked on these types of structures before. However, it does employ some interesting details, in particular, where the glass elements touch the original house. Here, two structural glass beams, which support the glass roof panels, seemingly disappear into the stone wall of the farmhouse. The beams are actually held inside large steel plates that act like a shoe and have been inserted into the house’s external wall. To hide the plates, they have been covered over with lime plaster and painted white to match the rest of the original wall. 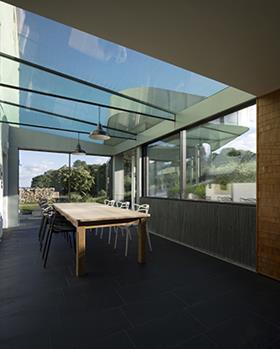 Another detail of the link that Archer resolved relates to the suspended lights fixed to the glass ceiling. With a fully glazed roof there is a desire to keep it unencumbered of unwanted cables. Archer got around this dilemma by shortening the middle sheet of glass (each structural beam is composed of three sheets) by 17mm at one end and inserting an aluminium square channel, which is concealed by black silicone. The electrical cable is threaded through the opening and runs along the beam where it emerges through another small opening halfway along. Here, the cable drops down and is attached to the light fitting.

The glass panels to the link building are double-glazed with a heat-strengthened laminated interlayer and also feature Skyframe sliding doors. The link and observatory both achieve very high thermal performance, which is important given the amount of glass they use.

Underfloor heating clad with slate flooring is provided throughout the new glass structures, and a well that was discovered beneath the observatory has been glazed over, becoming a feature in the floor.

The erection of the modern glass elements and restoration of the farmhouse took around 18 months to complete and the construction cost was £1.5m.

The project has not been without its surprises, including the discovery of an Iron Age knife and a possible smuggler’s hide in one of the farmhouse rooms. These incredible finds, coupled with rescuing an historic farmhouse from being a Building at Risk, have been very rewarding for Archer and his team.

But it was achieving his ambition of designing a rounded glass building that was the high point of the project. “We’ve worked on historic buildings before and we know how to achieve that sensitive touch between old and new,” he says, “but the biggest innovation and greatest lesson of this project was working with curved glass.”